Dr. El-kereamy will discuss the use of plant growth regulators that are registered for use on California citrus to increase fruit set, prevent fruit senescence, control preharvest fruit drop, and to control suckering. One DPR CE unit (other) and one CCA CE unit (IPM) were requested. 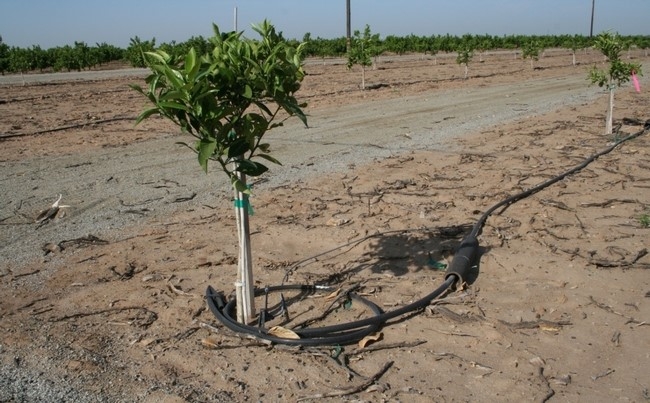 How plants sound the alarm about danger.  Hormones are more complex than previously thought.  Understanding their roles and interactions may ultimately result in better plant protection practices

LA JOLLA—Just like humans and other animals, plants have hormones. One role of plant hormones is to perceive trouble—whether an insect attack, drought or intense heat or cold—and then signal to the rest of the plant to respond.

A multicenter team led by current and former investigators from the Salk Institute is reporting new details about how plants respond to a hormone called jasmonic acid, or jasmonate. The findings, which were published in Nature Plants on March 13, 2020, reveal a complex communication network. This knowledge could help researchers, such as members of Salk's Harnessing Plants Initiative, develop crops that are hardier and more able to withstand assault, especially in an era of rapid climate change.

“This research gives us a really detailed picture of how this hormone, jasmonic acid, acts at many different levels,” says Professor Joseph Ecker, co-corresponding author and Howard Hughes Medical Institute investigator. “It enables us to understand how environmental information and developmental information is processed, and how it ensures proper growth and development.”

The plant used in the study was Arabidopsis thaliana, a small flowering plant in the mustard family. Because its genome has been well characterized, this plant is a popular model system. Scientists can take what they learn in A. thaliana and apply it to other plants, including those grown for food. Jasmonic acid is found not only in A. thaliana but throughout the plant kingdom.

“Jasmonic acid is particularly important for a plant's defense response against fungi and insects,” says co-first author Mark Zander, a staff researcher in Ecker's lab. “We wanted to precisely understand what happens after jasmonic acid is perceived by the plant. Which genes are activated and deactivated, which proteins are produced and which factors are in control of these well-orchestrated cellular processes?”

The researchers started with plant seeds grown in petri dishes. They kept the seeds in the dark for three days to mimic the first few days of a seed's life, when it is still underground. “We know this growth stage is super important,” says co-first author and co-corresponding author Mathew Lewsey, an associate professor at La Trobe University in Melbourne, Australia, who previously worked in Ecker's lab. The first few days in the soil are a challenging time for seedlings, as they face attacks from insects and fungi. “If your seeds don't germinate and successfully emerge from the soil, then you will have no crop,” Lewsey adds.

After three days, the plants were exposed to jasmonic acid. The researchers then extracted the DNA and proteins from the plant cells and employed specific antibodies against their proteins of interest to capture the exact genomic location of these regulators. By using various computational approaches, the team was then able to identify genes that are important for the plant's response to jasmonic acid and, moreover, for the cellular cross-communication with other plant hormone pathways.

Two genes that rose to the top in their degree of importance across the system were MYC2 and MYC3. These genes code for proteins that are transcription factors, which means that they regulate the activity of many other genes—or thousands of other genes in this case.

“In the past, the MYC genes and other transcription factors have been studied in a very linear fashion,” Lewsey explains. “Scientists look at how one gene is connected to the next gene, and the next one, and so on. This method is inherently slow because there are a lot of genes and lots of connections. What we've done here is to create a framework by which we can analyze many genes at once.”

“By deciphering all of these gene networks and subnetworks, it helps us to understand the architecture of the whole system,” Zander says. “We now have this very comprehensive picture of which genes are turned on and off during a plant's defense response. With the availability of CRISPR gene editing, these kinds of details can be useful for breeding crops that are able to better withstand attacks from pests.”

Another noteworthy aspect of this work is that all of the data from the research has been made available on Salk's website. Researchers can use the site to search for more information about genes they study and find ways to target them. 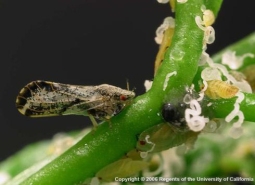 A UC Riverside-led team has created a chemical to help plants hold onto water, which could stem the tide of massive annual crop losses from drought and help farmers grow food despite a changing climate.

“Drought is the No. 1 cause, closely tied with flooding, of annual crop failures worldwide,” said Sean Cutler, a plant cell biology professor at UC Riverside, who led the research. “This chemical is an exciting new tool that could help farmers better manage crop performance when water levels are low.”

Details of the team's work on the newer, more effective anti-water-loss chemical is described in a paper published today in Science. This chemical, Opabactin, is also known as “OP,” which is gamer slang for “overpowered,” referring to the best character or weapon in a game.

“The name is also a shoutout to my 10-year-old at home,” Cutler said.

An earlier version of OP developed by Cutler's team in 2013, called Quinabactin, was the first of its kind. It mimics abscisic acid, or ABA, the natural hormone produced by plants in response to drought stress. ABA slows a plant's growth, so it doesn't consume more water than is available and doesn't wilt.

“Scientists have known for a long time that spraying plants with ABA can improve their drought tolerance,” Cutler said. “However, it is too unstable and expensive to be useful to most farmers.”

Quinabactin seemed to be a viable substitute for the natural hormone ABA, and companies have used it as the basis of much additional research, filing more than a dozen patents based on it. However, Quinabactin did not work well for some important plants, such as wheat, the world's most widely grown staple crop.

When ABA binds to a hormone receptor molecule in a plant cell, it forms two tight bonds, like hands grabbing onto handles. Quinabactin only grabs onto one of these handles.

Cutler's team searched millions of different hormone-mimicking molecules that would grab onto both handles. This searching, combined with some chemical engineering, resulted in OP.

OP grabs both handles and is 10-times stronger than ABA, which makes it a “super hormone.” And it works fast. Within hours, Cutler's team found a measurable improvement in the amount of water plants released.

Because OP works so quickly, it could give growers more flexibility around how they deal with drought.

“One thing we can do that plants can't is predict the near future with reasonable accuracy,” Cutler said. “Two weeks out, if we think there's a reasonable chance of drought, we have enough time to make decisions — like applying OP — that can improve crop yields.”

Initial funding for this project was provided by Syngenta, an agrochemical company, and the National Science Foundation.

Members of the research team included others from UCR, the Medical College of Wisconsin, Utah State University, and PRESTO Japan Science and Technology Agency, as well as Shizuoka, Tottori, and Utsunomiya universities in Japan.

Cutler's team is now trying to “nerf” their discovery.

“That's gamer speak for when a weapon's power is reduced,” Cutler said.

Whereas OP slows growth, the team now wants to find a molecule that will accelerate it. Such a molecule could be useful in controlled environments and indoor greenhouses where rainfall isn't as big a factor. 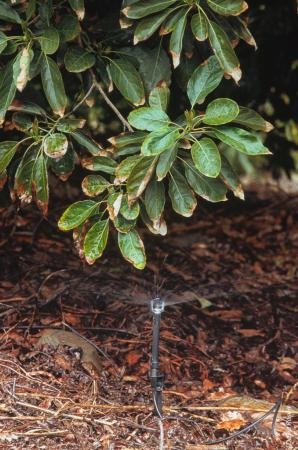