In 'pond scum,' scientists find answers to one of evolution's which-came-first cases

This means insects were just waiting for avocados and citrus to come along in order to start using them as a resource.

Chestnut Hill, Mass. (1/10/2018) - Visiting a colleague in Germany in 2012, Boston College Research Professor Paul K. Strother was examining soil samples for pollen, spores, pieces of plants and insect legs - organic debris that might otherwise have been considered "pond scum" when it was trapped in sediment during cataclysmic earth events 200 million years ago.

The slides of rock samples drilled in the German countryside included some material that looked familiar to Strother, a Department of Earth and Environmental Sciences researcher at Boston College's Weston Observatory, who studies the origin and early evolution of land plants. What he saw were features similar to those found in insect wings.

The wrinkle was that these types of moths and butterflies - known as Lepidoptera - were long posited to have evolved 50 to 70 million years later, during the Cretaceous period when the first flowering plants emerged as their prime food source.

"The consensus has been that insects followed flowers," said Strother, a co-author of "A Triassic-Jurassic window into the evolution of Lepidoptera," a new report published today in Science Advances. "But that would be 50 million years later than what the wings were saying. It was odd to say the least, that there would be butterflies before there were flowers."

Five years later, Strother and colleagues from natural history museums in Germany and a university in the Netherlands have developed a scientific case showing the Lepidoptera evolved earlier than previously established - emerging during the Jurassic period.

Absent flowers, the researchers report, primitive moths and butterflies, known as the Glossata, developed the physical attributes - namely the sucking proboscis - to find nutrition by drawing off water droplets from the tips of immature gymnosperm seeds.

"What we've found is that these butterflies and moths with mouth parts were feeding on pollen droplets of gymnosperm seeds - from conifers related to pines, seed plants without fruits and flowers. They were feeding off the cone-borne seeds - mainly as a source of water," said Strother.

Even Charles Darwin called the mysterious evolution of flowering plants "an abominable mystery." Scientists have reckoned that flowering plants preceded the insects that fed off of them. But researchers have gradually started to piece together evidence that moths and butterflies existed earlier than the Cretaceous period, which began 145 million years ago.

The team's findings shed new light on the classic example of co-evolution: the evolutionary interplay between pollenating insects - flies, bees, wasps, butterflies and moths - and angiosperms, or flowers, Strother said.

"Our discovery does not change this, but instead, it demonstrates that the Glossata - which gave rise to the Lepidoptera - evolved earlier by a feeding adaptation to the gymnospermous ovules, or the pollen droplets," said Strother. "These insects later transferred their feeding preference onto angiosperms, and, as a result, ended up co-evolving with flowers where they function to transfer pollen as they feed on nectar."

Developing a clearer picture of insect evolution had proved elusive because much of what is learned from ancient rock, soil and fossils comes from earth once covered by oceans, said Strother. Moths and butterflies lived over land masses. In addition, their delicate features were prone to deterioration prior to fossilization.

Utrecht University paleontologist Bas van de Schootbrugge and colleagues assembled a portfolio of samples containing fossilized remains of moths and butterflies to carefully establish the presence of Lepidoptera in earth samples from a region where the cataclysmic transition between Triassic and Jurassic is preserved in rock.

The mass extinction event 201 million years ago wiped out an estimated 35 percent of all species, which makes the survival and diversification of Lepidoptera all the more remarkable.

In 2012, Strother was examining the sample slides looking at algae, fungi and soil microorganisms. "These are organic extractions after you've dissolved away the minerals in the samples and you're looking at anything that is organic. There are pollen and spores. There are other things. Pieces of plant cuticles. Resistant organic material. Insect legs. Ninety-nine percent is plant debris.

"It's basically pond scum," said Strother, referring to the film of debris that can sit atop a pool of standing water. Part of what Strother saw looked similar to insects from another era, he said.

The project required linking a range of evidence, akin to a scientific detective story, said Strother.

"This is the old-fashioned science of discovery," said Strother. "We're looking at this microscopic world of things that lived hundreds of millions of years ago and we don't know what they are. The challenge is: can we figure out what they are? Part of it is piecing together the tree of life, or the evolution of organisms through time. It is more like a puzzle or a mystery."

IMAGE: Examples of the oldest wing and body scales of primitive moths from the Schandelah-1 core photographed with transmitted light (magnification 630x). The scales are part of palynological preparations and occur... view more 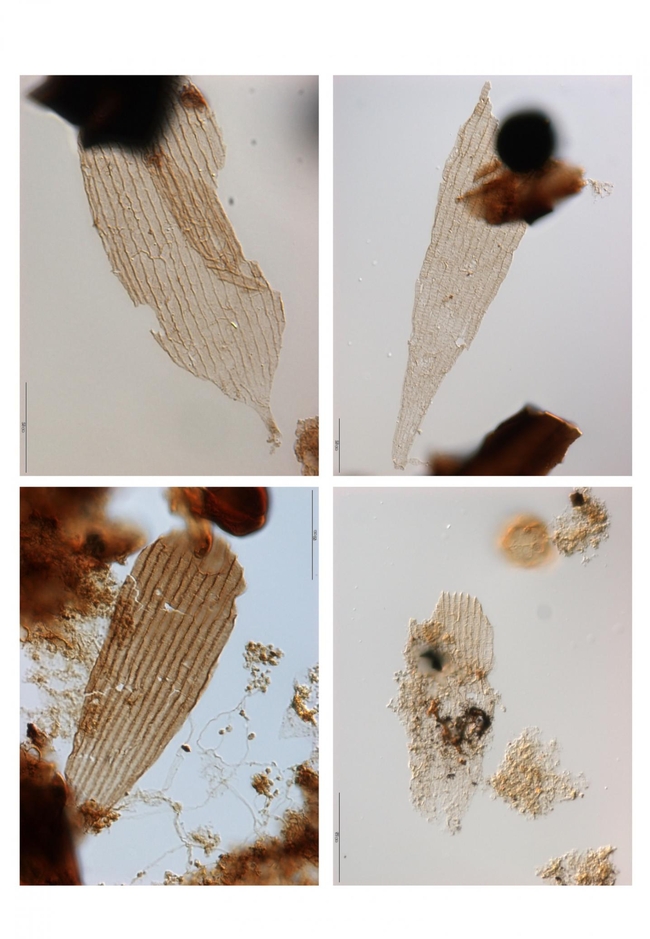 Last May/June during a hot period and soon after fruit set, avocado growers and PCAs in the Oxnard/Camarillo area were calling in about young fruit about he size of a quarter showing up with white spots.  Cutting into the fruit there might only be a small black spot just below the injury.  Because that's what it is, a wound response on the part of the fruit to a physical damage.  This occurred on several orchards also in the San Luis Obispo area and it seemed to happen in orchards that had recently been sprayed for avocado thrips.  No piercing-sucking  insects were found at any of these sites. Insects that would feed by feeding on the fruit and causing damage and malformed fruit. Insects that could typically make probing inspections of fruit prior to laying eggs. No eggs or larvae were found in the fruit. Nothing like lygus bug, BMSB, Bagrada bug or other stink bugs was found.

And then late June, the calls stopped.  No more damaged  fruit was being found. And then a lone call from Cayucos.  Damage was found on young and older fruit.  New damage seemed to be occurring on the fruit that normally sets later in that northern area.  The grower walked the orchard and didn't find any bugs.  The PCA swept the grove for insects.  A yellow sticky card was put out.

So far, no insect has been found on the fruit. So what caused and "is" causing the damage to the fruit?  It's not clear.  Fruit that was damaged in Oxnard back in late May was tagged to see if it recovered.  Ten fruit were flagged and two months later, those tagged fruit were still on the trees.  So either the fruit that was attacked fell off with the initial damage or the fruit observed later had healed itself.  Fruit have this capacity when they are actively growing to cover over damage.  Often it is malformed.  In most of cases with this fruit, the damage was very superficial.  Occasionally, there deeper pits, but we didn't see any burrowing or tunneling.

If anyone else saw similar damage and has more to offer about this happening, I would be glad to hear about it.

Photos:  Damaged fruit that was flagged and observed 2 months later. Bees are the most important pollinators of California agriculture—helping us grow field crops, fruits, nuts, and vegetables. Honey bees receive most of the credit for crop pollination, but many other kinds of bees play an important role as well. There are 1600 species of bees in California! Take time during Pollinator Week to learn about the different kinds of bees and what you can do to help them flourish.

Why should I care about other kinds of bees?

Bees other than honey bees contribute significantly to crop pollination. For example, alfalfa pollination by alfalfa leafcutter bees is worth $7 billion per year in the United States. Other bees can also boost the result of honey bee pollination—in almond orchards, honey bees are more effective when orchard mason bees are present. The more bee species, the merrier the harvest!

While growers often rent honey bee colonies to pollinate their crops, some wild bees pollinate certain crops even better than honey bees do. For instance, bumble bees are more effective pollinators of tomato because they do something honey bees do not: they shake pollen out of flowers with a technique known as buzz pollination. Likewise, native squash bees are better pollinators of cucurbits—unlike honey bees, they start work earlier in the day, and males even sleep in flowers overnight.

How can I help honey bees and other bees?

When it comes to land management and pest management practices, some bees need more accommodations than others. That's why it is important to know what bees are present in your area and important to your crop, and plan for their needs. Use this bee monitoring guide from the University of California to identify the bees present on your farm.

You can help all kinds of bees by using integrated pest management (IPM). This means using nonchemical pest management methods (cultural, mechanical and biological control), monitoring for pests to determine whether a pesticide is needed, and choosing pesticides that are less toxic to bees whenever possible. Check out the UC IPM Bee Precaution Pesticide Ratings to learn about the risks different pesticides pose to honey bees and other bees, and follow the Best Management Practices To Protect Bees From Pesticides.

Bees also need plenty of food to stay healthy and abundant. Plant flowers that provide nectar and pollen throughout the year. See the planting resources below to find out which plants provide year-round food for specific types of bees. 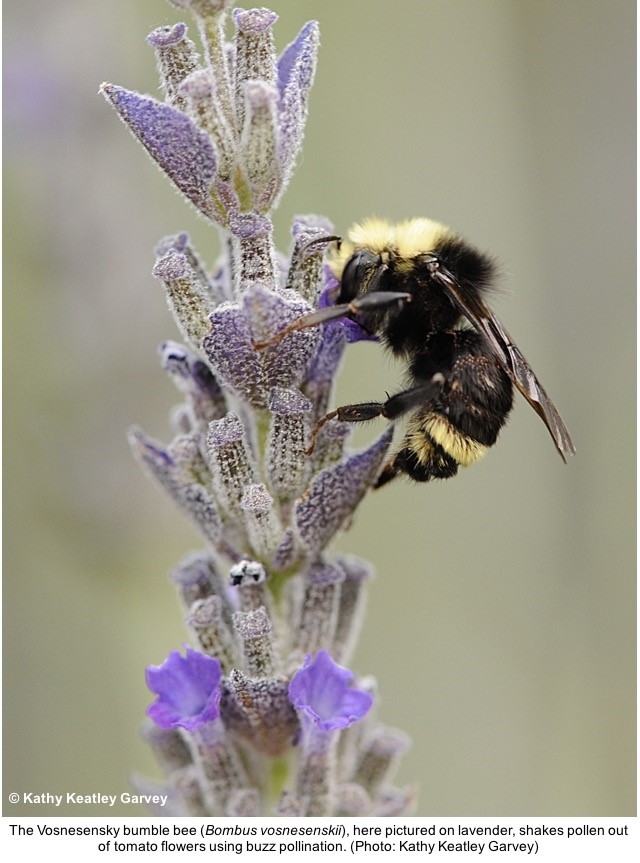 Here are the top 10 blogs from Topics in Subtropics over the last 5 years. The two earliest and latest pertain to how you select products that will truly help you from amongst all those that are being promoted. Some of these have been around a long time, so that's why they are the most read.  Do a Ctrl + click on the URL to read the post.

An online course highlighting how pesticide resistance develops among pests is now available on the UC IPM Web site.  Created primarily for pest control advisors and other licensed pesticide applicators, this course describes the mechanisms of resistance in pathogens, insects, and weeds and discusses ways to manage resistance within the different disciplines.

The online course is divided into three narrated presentations followed by a final test for each section.  This course has been approved for 2 continuing education units in the “Other” category from the Department of Pesticide Regulation.

This course is based on a series of workshops held in Davis, Fresno, and at the Kearney Agricultural Research and Extension Center during the spring of 2014 presented by Dr. Doug Gubler (Dept. of Plant Pathology, UC Davis.), Dr. Larry Godfrey (Dept. of Entomology and Nematology, UC Davis), Dr. Beth Grafton-Cardwell (Lindcove Research and Extension Center and UC Riverside), and Dr. Kassim All-Khatib (UC Statewide IPM Program).

Check out the new course at http://www.ipm.ucanr.edu/training/pesticide_resistance.html. 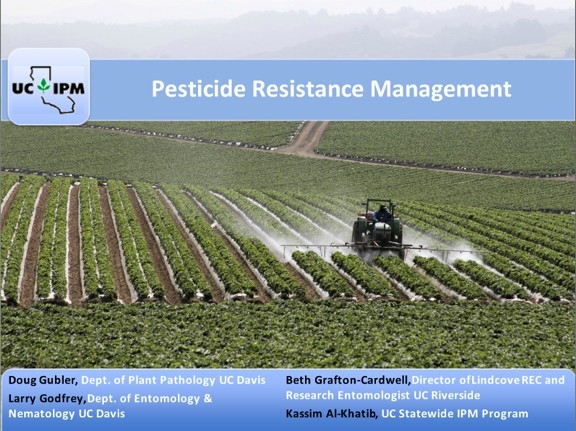