Amanita muscaria fungus growing in a high elevation conifer forest in Hawaii. We can see much of this mushroom above ground, but it has an incredible structure under ground as well. Credit J Meulemans

Have you ever thought about it? I'm sure a lot of you have…what's the biggest living thing on earth? If you're like me, you immediately think of animals like the blue whale. In this case, we're just talking about organisms that spend their life predominantly or entirely on land. Anybody thinking of the rhinoceros, or maybe the African elephant? Nope!

The answer to this question might surprise you. The largest terrestrial organism on the planet is actually a fungus! Not your typical, garden-variety mushroom, but a fungus, nonetheless. And while it is edible, it comes with a few problems. Its common name is honey fungus.

The soil is filled with living organisms, large and small. Bacteria are the most numerous soil organism – there can be more than a million in a teaspoon of soil! There are over 10 trillion types of soil bacteria!

There are “only” 100 billion types of soil fungi, but they play in important role in the life cycle within the soil. Fungi break down decaying plant material into nutrients that other plants can use to grow. They soak up water in water-logged soils. You might be familiar with seeing mushrooms growing on moist logs, or in soil with wet leaves.

Honey fungus is a bit different from many other fungi. It's not one that landowners will welcome because it can kill trees. In fact, it gained fame in the late 1990s as the “culprit” that was killing fir trees in the Pacific Northwest. (Fir trees are widely sought after as beautiful landscape plants,  Christmas trees, and for lumber used in building homes.)

Honey fungus is a parasite – Armillaria solidipes. Parasites are organisms that live off other organisms, sometimes hurting them. Honey fungus is widely distributed across the cooler regions of the United States and Canada. It is very common in the forests of the Pacific Northwest.

These fungi grow in individual networks of above and below-ground fibers called mycelia. Mycelia work in a similar fashion to plant roots. They draw water and nutrients from the soil to feed the fungus. At the same time, they make chemicals that are shared with other organisms in the soil. Sadly for the fir trees, the honey fungus can kill already weakened or stressed trees. The natural action of this fungus can be destructive in forests, leading to widespread die-off in timber stands.

One cool feature of the underground network of mycelia of all fungi is that they help hold soil particles together. Just like plant roots, mycelia work to prevent soil particles from blowing away in the wind or being taken away by running water. They are a very important part of the soil ecosystem.

Scientists have shown that Armillaria solipipes identify and connect to each other. That's right: when mycelia from different individual honey fungus bodies meet, either in or on the soil surface, they can attempt to fuse to each other. The fungi must be genetically identical honey fungi. When the mycelia successfully fuse to each other, they link very large fungal bodies together. This, in turn, changes extensive networks of fungal “clones” into a single individual.

While honey fungus is impressive in both age and size, it isn't always a favorite of scientists and landowners because of its parasitic nature. But it is the largest organism on earth, and scientists have had only a few decades of research to understand how mycelia fuse and communicate. Perhaps one day, research discoveries about honey fungus could lead to a new medicine (think Penicillin), or new ways to grow food – the possibilities are endless!

And this is the largest terrestrial organism. Who knows what lurks in the depths of the ocean?

Armillaria solipipes is one of the many species that was once lumped as Armillaria mellea, oak root fungus.  So many woody perennials are susceptible to this fungus.  It turns out that avocado for whatever reason tends to be somewhat more tolerant of oak root fungus than many other trees.  Under stress, it too will succumb, though. 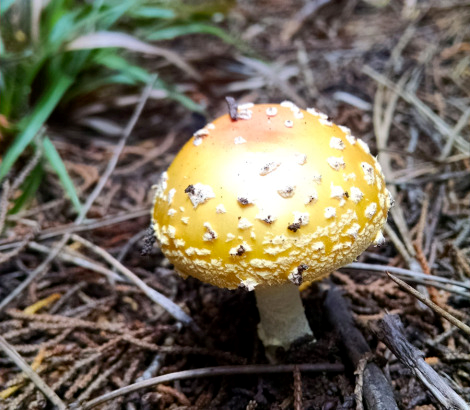