However, sometimes there is a particular plant that is just so terrifying that it lends itself to coverage in a major news outlet, as was the case for this article about giant hogweed (Heracleum mantegazzianum) by Caitlin O'Kane on CBS news last month: "Giant hogweed, plant that causes blindness and third-degree burns, discovered in Virginia."  As the headline suggests, this is a plant you should keep a safe distance from if you are unlucky enough to come across it.  Just in case you're thinking that this is just sensationalism, there's a page on Snopes that confirms the assertions about giant hogweed's dangerous sap (and also confirms its place in popular culture).  I won't provide a direct link here, but a simple Google search of "giant hogweed" turns up some images of what look like very painful giant hogweed injuries.  The photograph below was taken by Gavin Edmondstone: Giant hogweed is native to the Caucasus region and southwest Asia, and is presently found in Europe, Canada, the United States,  Australia, and New Zealand, where it was likely introduced as an ornamental for its showy inflorescence.  Apparently it was a well known nuisance in Britain, so much so that the band Genesis released the ominous song "Return of the Giant Hogweed" on their 1971 album Nursery Cryme:

"Turn and run
Nothing can stop them
Around every river and canal their power is growing..." (Google the song title for the complete lyrics- they are fantastic!  And strangely factual...)

Here in the US, giant hogweed is mostly found in New England and the Pacific Northwest.  As the article suggests, giant hogweed has expanded down the east coast and was recently discovered for the first time in Virginia.  Over on the west coast, it has made it as far south as northwestern Oregon.  Californians should be on the lookout however, as we do share some similar habitats with Oregon, particularly in the northern part of the state.  California also has a native congener called "cowparsnip" (Heracleum maximum), suggesting that suitable habitats do exist across the state.

For those involved with management of this plant, a great resource with information on controlling giant hogweed can be found in DiTomaso et al. (2013) Weed Control in Natural Areas in the Western United States, as well as several state conservation webpages.  Before embarking on control, be careful not to confuse with natives that may look similar- your local county Natural Resources Advisor can be of great help in correctly identifying invasive plants.  And it should go without saying, but given the potential for painful injury, this is a plant you may want to enlist the help of professionals with if you have it on your property.

As the band Genesis proclaims:

Now if we could just get some similar coverage in the press or popular culture for our less glamorous but equally terrifying invasive grasses... 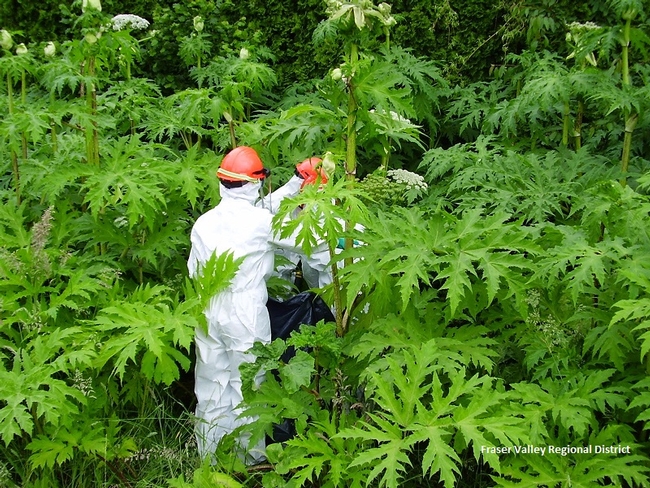