Department of Botany and Plant Sciences, University of California Riverside.

Evidence of avocado selection by human hand as far back as 8,000 BC is preserved in archaeological sites in Puebla State, Mexico. At the time of European contact, written records indicate that there already existed three distinct types of avocado, each from a separate geographic center of origin. Today, we refer to them as botanical races, and they represent the “primeval soup” that gave rise to modern avocado cultivars. Here is what we know about the three botanical races of avocado, respectively called (1) the West Indian (formerly known also as the South American), (2) the Guatemalan, and (3) the Mexican (also known as the “criollo”): Each exhibits a characteristic suite of traits that includes differences in leaf chemistry (a distinctive anise scent is found only in Mexican race avocados), peel texture and color, fruit oil content, and sources of tolerance (diseases and salinity). The races were domesticated in separate geographic regions, the “West Indian” race in lowland coastal Mesoamerica (possibly Yucatán), the Guatemalan race in upland Guatemala, and the Mexican race in highland Mexico. The Guatemalan and Mexican races remained fairly local, so their names reflect their respective centers of domestication, but the “West Indian” race seems to have been spread far and wide by indigenous cultures in Meso- and South America and was, incorrectly, named for a much later destination. The explorations of the 15th and 16th centuries kicked off the worldwide distribution of (mostly West Indian race) avocados, reaching Spain in the early 17th century, Jamaica in the mid-17th century, and Indonesia by the mid-18th century. It wasn't until the mid- to late 19th century that the three races of avocado found their way to the United States, primarily Florida and California, where they underwent many rounds of selection and hybridization. ‘Hass', the cornerstone of the California avocado industry, was patented in 1935 but its ancestry is unknown. It is considered to be a Mexican x Guatemalan hybrid because its leaves lack the anise scent and its fruits combine the thick, rough skin of the Guatemalan race but the high oil content of the Mexican race. 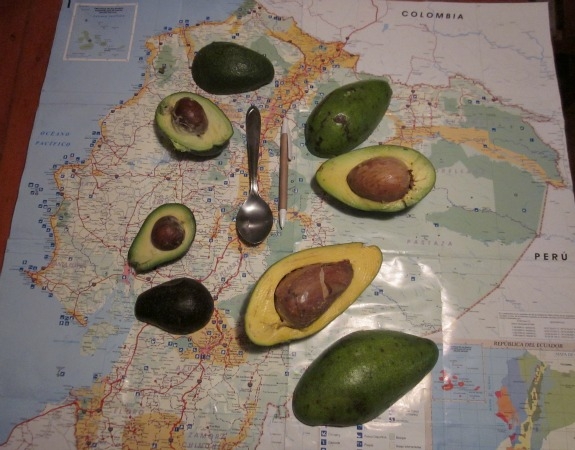