Bob Hill, a local Ventura PCA, saw an interesting mite he had never seen before and asked if I could id it.  Well, I sent it in to Mark Hoddle and UCR and he turned it over to his student Ricky Lara to id it.  And this is what he says:

I started finding this type of mite infrequently in 2011, when I was sampling foliage in avocado orchards.  Although seldom seen, they have a wide geographic distribution on avocado. I found them in Cambria (SLO), Santa Rosa Valley (Ventura County) and Irvine (Orange County). At the time I narrowed down the mite family to Winterschmidtiidae. I have to double check, but I believe their feeding habit is listed as fungivorous (The Manual of Acarology). They might feed directly on plant material too (no fungus on the avocado leaves I sampled) but no one has really studied them. I tried rearing them in the lab (without other mites as a food source, only pollen) but the colony only lasted for a couple of months. On avocado I have seen these mites at the leaf-vein junctions. This probably provides a natural home ("domatia") for them as it does for other mites (e.g. phytoseiids, tydeids, stigmaeids). On lemons, the calyx structure probably serves the same ecological function for these mites.

The tydeid mites are what I call the "tidy mites" since their basic function is to run around and clean up leaves, although there are some predatory and scavenging members of the family  This little guy is just one of the many tidy mites found out there and its recent appearance is just a reflection of the weather/climate we have this time.

The red circled mite is the one we are talking about here.  The structures next to it are some egg cases of another animal. The red dots are called opisthonotal glands which produce pheromones, the purpose of which is not clear. 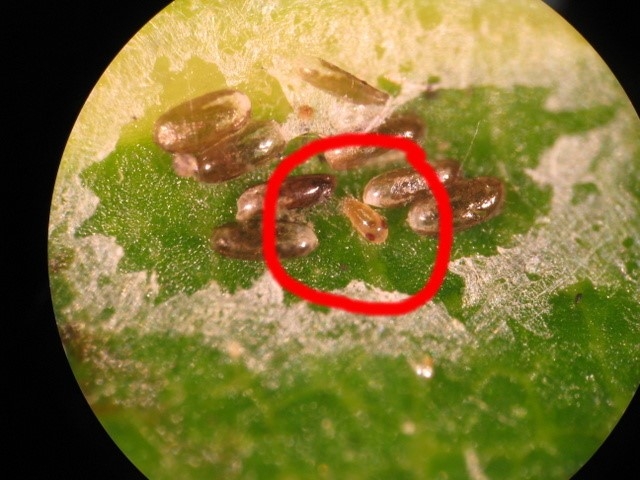