A quick post to share a link to the most recent version of the CWSS Research Update and News from the California Weed Science Society.

Lots of good information about the upcoming conference, weed science student scholarships, and weed management reports compiled by CWSS Board Member and Editor, Whitney Brim-DeForest.  Including:

Links below about the 2018 UC Weed Day event:

First the video:  https://youtu.be/XkUT_uSbxak  Produced by the University of California Division of Agriculture and Natural Resources (UCANR) Communications group posted a great video that captured a lot of highlights of the field portion of Weed Day as well as the interactions among the participants. 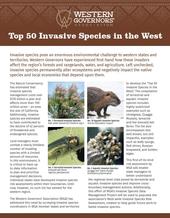 Last Thursday (March 15, 2018), the Western Governors' Association released its first ever list of the top 50 invasive species (25 terrestrial, 25 aquatic) important in the western US.  This list includes a number of plant, animal, insects, and pathogens.

Weeds were 18 of 25 in the terrestrial list and 10 of 25 and in the aquatic list.  Both lists had weeds in the #1 slot (tamarisk and Eurasian watermilfoil, respectively.

Here's a link the the press release: http://westgov.org/news/wgas-top-50-invasive-species-in-the-west-offers-first-regional-report

Long-time member of the California weed science community Steve Orloff passed away on October 3, 2017 after a brief fight with cancer.

Steve spent his 33 year career as a UC Cooperative Extension Farm Advisor, initially in the high desert of southern California and for the past 20+ years in northern California in Siskiyou  County.  Steve was an important contributor to the UC's weed science program but he was perhaps even more engaged with researchers, farmers, and the agricultural industry as a forage and cereals agronomist.  Dan Putnam and Rob Wilson wrote a really