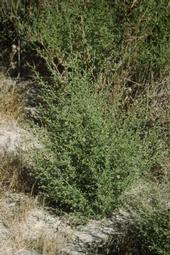 Stinkwort made its first California appearance in 1994, but remained quite rare...