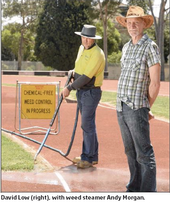 A sporting site in Melbourne is being used for a weed-tackling treatment that doesn't contain herbicides. A group of green thumbs have used steam to kill weeds, instead of applying chemicals. The Weed Network's Dr. David Low said they were trialling the method at Bayside Council sites. He said they had been researching chemical-free methods for working with weeds for five years. “We have been working with Bayside Council to introduce steam weeding as an alternative to herbicide in sensitive sites used heavily by children, for example for...

Abstract: Reduction in herbicide use in non-agricultural areas is being imposed by a growing number of governments, triggering the development of alternative strategies for weed prevention and control.​ This study aimed to determine the weed preventive abilities of different paving types, the required treatment frequency of non-chemical weed control scenarios on these pavements and the associated weed species composition.​ A test parking area, constructed with four concrete paving types, was sown with a mixture of dominant weed species.​ Six scenarios with repeated use of a single weed control method (brushing with waste removal, hot air, selective application of hot water and three scenarios with flaming) and two...