RIVERSIDE – A third backyard citrus tree in the city of Riverside has tested positive for citrus greening, a deadly disease for citrus plants that can be transmitted from tree to tree by the Asian citrus psyllid, state and federal officials have confirmed.

Citrus greening, known as huanglongbing or HLB, was first confirmed in Riverside on July 25. The latest confirmation came Thursday (9/28).The initial sample was from a grapefruit tree in a residential neighborhood near the intersection of Chicago...

The California Department of Food and Agriculture crews conducting intensive, risk-based surveys detected eight citrus trees confirmed to be infected with Huanglongbing. All trees were in the core area of San Gabriel where HLB has previously been detected. This brings the total number of HLB-positive trees in California to 46.

CDFA routinely conducts HLB surveys throughout the state based on a risk model that considers factors that may make an area more likely to have a presence of the disease. CDFA has further fine-tuned this approach by increasing the number of samples pulled from citrus trees...

The following press release was distributed on October 17, 2016 by the California Department of Food and Agriculture.

A portion of Placer County has been placed under quarantine for Asian citrus psyllid (ACP) following the detection of multiple life stages on citrus trees within the City of Lincoln.

The quarantine zone in Placer County measures 118 square miles, bordered on the north by Riosa Road; on the south by the Roseville City Limit; on the west by Brewer Road; and on the east by Fowler Road. The quarantine map for Placer County is available online at: 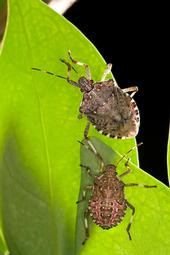 Scientists are rearing tiny Asian wasps in quarantine and evaluating whether they can be released in California to battle brown marmorated stink bug (BMSB), an invasive pest that poses a serious threat to the state's $54 billion agricultural industry, they reported in the current issue of California Agriculture journal.