Warming temperatures combined with late spring rains create ideal conditions for mosquitoes to breed, including the mosquitoes that transmit West Nile Virus. To help spread the message about mosquito prevention, April 15-21, 2018 has been designated as Mosquito and West Nile Virus Awareness Week. 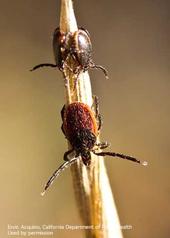 May is Lyme Disease Awareness Month, a campaign that brings attention to this tick-borne illness.

Lyme disease can be transmitted to humans and pets in California from the bite of an infected western blacklegged tick. Lyme disease causes flu-like symptoms that left untreated, may progress to arthritic, neurologic, or cardiac problems. Incidences of Lyme disease have occurred in some northern California counties, with some counties posing a higher risk of contracting the disease than others..

There are several ways to protect yourself from Lyme disease. If you spend time outdoors in tick-infested areas, take these simple precautions:

April 16-22 has been declared West Nile Virus and Mosquito Vector Control Awareness week by the California State Legislature. West Nile virus (WNV) is a mosquito-borne disease that was originally found in Africa. It was first detected in the eastern U.S. in 1999, and has since spread across the country and is well established in most states, including California.

West Nile Virus is spread by mosquitoes that get the virus from infected birds. Once infected, mosquitoes then transfer the virus to humans and other animals. Infected humans can become very ill. The disease usually is most serious in children, people with weakened immune systems, and the elderly.

As weather warms and people spend more time outdoors, it's...

May is Lyme Disease Awareness month, so what better time to tell you about the updated Pest Note: Lyme Disease in California.

You can read about the main carrier of Lyme disease, the western blacklegged tick, including the biology of the tick, specific habitats (dense woods and trails with leaf litter), places and times of the year where bites from disease-carrying ticks are... 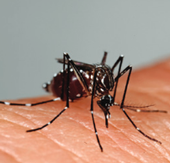 How is Zika Transmitted? The Zika virus is primarily transmitted by the bite of an infected female Aedes egypti mosquito, a species also known to carry yellow fever. The Zika virus is thought to also be transmitted via blood transfusion and sexual contact, and in rare cases from mother to child. Researchers are currently investigating the link between the Zika virus and birth defects including microcephaly.

How to Protect Yourself. To protect yourself...