The last weeks of summer are here and many are maximizing time outdoors, whether in yards, parks, or natural areas. As you enjoy the sunshine and perhaps a picnic, it is possible you may encounter different types of stinging insects such as bees and wasps.

Here are some resources that can help you avoid getting stung.

This is a 2.5 hrs in-person meeting converted into a webinar. You will hear about the current research to keep bees healthy from leading experts in the field - Dr. Quinn McFrederick and Dr. Boris Baer from UC Riverside. The webinar will start at 9 am. It will consist of two presentations...

Saturday, August 18 is National Honey Bee Day! Many people are concerned about the health of honey bees, and rightly so, as there has been a decline in their populations during the last decade.

This year on National Honey Bee Day, learn how you can protect honey bees by choosing plants for your landscape that bees prefer visiting to collect pollen and by avoiding the use of pesticides that can be toxic to bees.

For specific details about what else you can do, read the article What Can Gardeners do to Help Honey Bees. 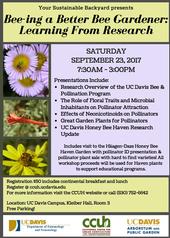 The California Center for Urban Horticulture is partnering with the UC Davis Department of Entomology and Nematology for the upcoming workshop: "Bee-ing a Better Bee Gardener: Learning from Research."