UCANR: Promoting healthy people and communities
Murder Hornets! Everyone Calm Down
Published on: May 20, 2020 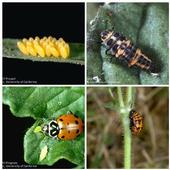 Other “natural enemies” such as assassin bugs, minute pirate bugs, lacewings, predatory wasps, spiders, and predaceous ground beetles attack and kill pests. In some cases, both the adults and larvae are predators. It's important to recognize the different life stages of these beneficial predators so you know they are helping control pests and not attacking your plants.