And they love books on bugs.

One of the bug books we bought our son during his childhood was “Insect World: A Child’s First Library of Learning,” published by Time-Life Books.

It includes such chapters as:
Why Do Butterflies Love Flowers?
Why Are a Dragon Fly’s Eyes So Big?
Why Do Ladybugs Spit Yellow Liquid When They’re Caught?
Why Do Bees Sting?
How Do Grasshoppers Jump?

An illustration in the back of the book depicts insects doing the wrong things. Titled “What’s Going On?,” the drawing shows a butterfly eating an insect (Not! It drinks nectar); a praying mantis eating grass (Not! It eats other insects), a grasshopper drinking sap (Not! It does eat grass, though), a honey bee spinning a web (Not! But it does make a wax hive) and a cicada drinking nectar (Not! But it does drink sap).

The diversity of insects continues to amaze us--from the huge Madagascar hissing cockroach to the tiny walnut twig beetle. Check out the Bohart Museum of Entomology's seven million specimens on the UC Davis campus or take a look (below) of this partial collection of UC Davis evolutionary ecologist Andrew Forbes, a post-doctoral scholar in professor Jay Rosenheim's lab.

On Thursday, Feb. 12, the eyes of the world will be focused on biodiversity. That's the 200th anniversary of the birth of naturalist Charles Darwin. The New York Times just published an article on him, "Darwinism Must Die So Evolution May Live." The San Francisco Chronicle explored "Eric Simons: Frolicking in Darwin's Footsteps."  The BBC says "Scotland 'Inspired' Darwin's Work."

And at the 2008 meeting of the Entomological Society of America, scientists devoted an entire seminar to Darwin's fascinating life and his contributions to science.

Fortunately, Darwin (1809-1882) neglected the medical studies his parents so desperately wanted him to pursue and instead explored his passion. 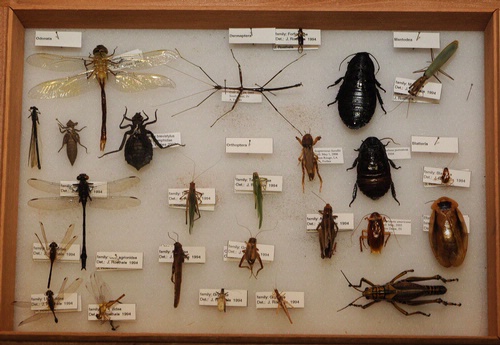 Diversity of Insects
DIVERSITY OF INSECTS--From the Madagascar hissing cockroach to the praying mantis to the grasshopper, insects are diverse. This is part of a collection owned by UC Davis evolutionary ecologist Andrew Forbes. (Photo by Kathy Keatley Garvey)
Tags: Andrew Forbes (3), Charles Darwin (4), diversity of insects (1)
Comments: 0
No Comments Posted.
Leave a Reply: