Slime molds, classified in the group called Myxomycetes, are primitive fungi that feed on dead or decaying organic matter and have elaborate life cycles. The mature fruiting bodies of slime molds are quite diverse and can appear as sheets, mounds, crusts, blobs, and even eggs or structures of insects (Photo 1).

Occasionally, slime molds can be found growing incidentally around or on crops. The pictures below are of the slime mold Fuligo septica that is emerging from the bark mulch of a local blueberry field. The immature stage (Photo 2) is yellow, without distinct shape, and has a sticky, gooey feel when touched. This is the form that one finds oozing and moving onto organic material. When mature, a tan to off-white, crusty calcium layer forms on the top of the creeping mass (Photo 3). When fully mature and dried, the calcium layer breaks, exposing and releasing millions of brown spores.

Slime molds can also grow onto living plant parts and appear to cause a disease. Photos 4 and 5 show a slime mold growing on top of strawberry leaves; photo 6 shows slime mold colonization on a wasabi leaf. However, it is important to emphasize that slime molds are completely saprophytic, meaning they feed on dead organic material only. Slime molds therefore do not present any harm to plants.

Slime molds will only develop if there is sufficient organic matter present to feed the fungus and if there is ample and consistent moisture to allow it to develop. For these reasons, slime molds are rarely seen in cultivated fields but are more common in forests, shaded landscape areas, and lawns. 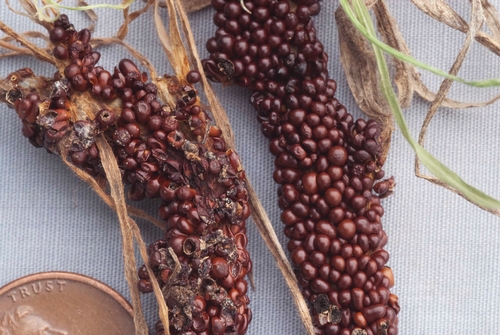 Some slime molds, such as this species growing on a grass, may resemble insect eggs or bodies. Photo courtesy of Steven Koike, UCCE. 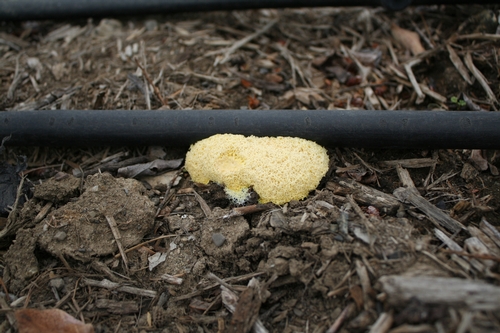 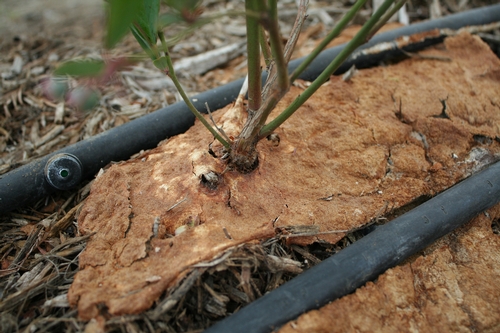 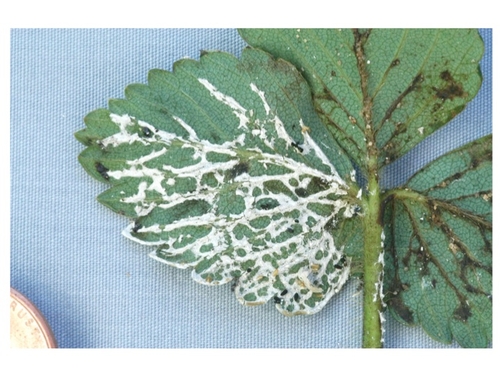 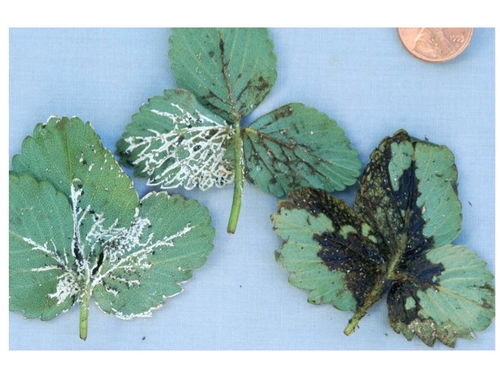 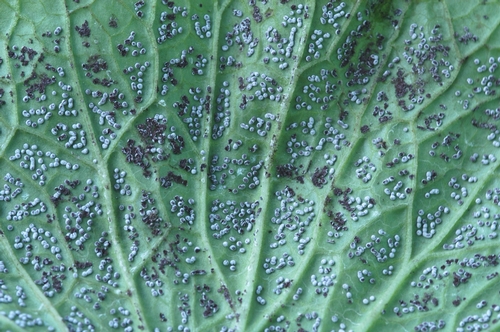 Slime mold colonization of wasabi leaf. Photo courtesy Steven Koike, UCCE.
Tags: slime molds (1)
Comments: 1
Comments:
by Greg W. Douhan
on September 22, 2015 at 1:01 PM
Steven- Do you know what the genus or species of slime mold that is on the wasabi picture? I found some on ornamental strawberry growing in my lawn today that look identical. Was thinking about maybe trying to key it out.

Thanks, Greg
Leave a Reply: