The state of Dothiorella canker on avocado in California
Published on: June 28, 2013

However, recent studies based on DNA analyses suggest greater species diversity of this pathogen group than based on morphological characteristics alone. Thus far, multiple species of Botryosphaeriaceae have been found to cause the typical Dothiorella canker (Fig3.) and stem-end rot (Fig 5) on avocado in California.  Percent recovery of Botryosphaeria spp. based on morphological characters ranged from 40-100% in Riverside county, 42-53% in Ventura county, 33% in Santa Barbara county, 60% in San Diego county and 32-60% in San Luis Obispo county.

According to preliminary results from a continuing survey throughout avocado growing areas of California, multiple species of Botryosphaeria (Neofusicoccum australe, B. dothidea, N. luteum, and N. parvum) were found.

Pycnidia (overwintering structure) of Botryosphaeriaceae species were also observed on old diseased avocado tree branches. Sequenced rDNA fragments (ITS1, 5.8S rDNA, ITS2, amplified with ITS4 and ITS5 primers) were compared with sequences deposited in GenBank.

Pathogenicity tests were conducted in the greenhouse on 1-year-old avocado seedlings, Hass cv., with one randomly chosen isolate from each of the Botryosphaeriaceae species noted above. Four replicate seedlings were stem-wound inoculated with a mycelial plug and covered with Parafilm. Sterile PDA plugs were applied to four seedlings as a control. Over a period of 6 months, seedlings were assessed for disease symptoms that included browning of leaf edges and shoot dieback. Mean vascular lesion lengths on stems were 64, 66, 64, and 18 mm for B. dothidea, N. parvum, N. luteum, and N. australe, respectively. Each fungal isolate was consistently reisolated from inoculated seedlings, thus completing the pathogenicity test. To our knowledge, this is the first report of N. australe, N. luteum, and N. parvum recovered from branch cankers on avocado in California.

These results are significant because Botryosphaeriaceae canker pathogens are known to enter the host plant through fresh wounds (pruning, frost, and mechanical). With high-density planting becoming more common, which requires intensive pruning, the transmission rate of these pathogens could increase in California avocado groves. The Eskalen laboratory is currently investigating  control measures for dothiorella canker and stem-end rot pathogens.

Branch dieback and trunk canker caused by the fungus 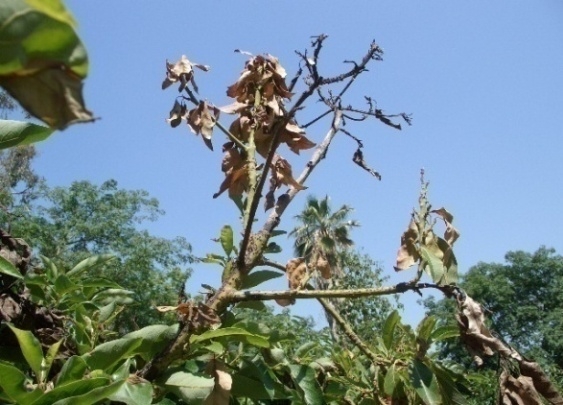 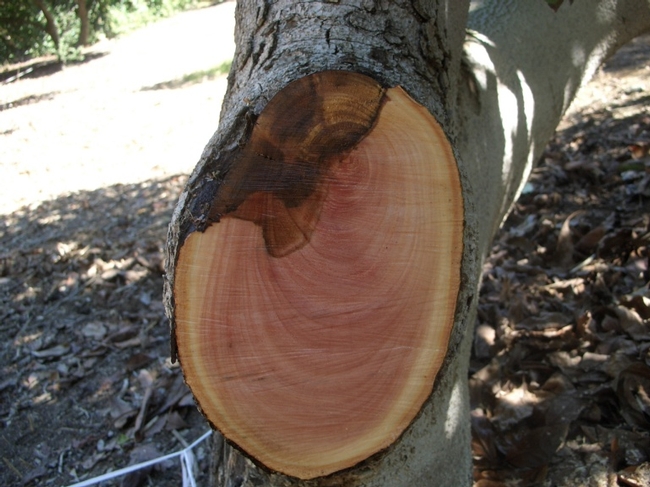