In January, 1995 during my second consultancy visit to Thailand, I was asked to lecture to the staff of KasetsartUniversity located in Bangkok. The lecture was on the problems of the greening disease in their country where trees die between 4 and 8 years and rarely reach 12 years of age. The lecture was well attended by many young staff and scientists. During the lecture I showed them a picture of a large citrus tree dying with the greening disease .

While showing this picture, almost half the audience raised their hands and one by one, said that picture of this tree could not have been taken in Thailand for they had never seen a tree of this size. In truth, the picture was taken in Thailand by Dr. E.C. Calavan who visited Thailand in 1975 and gave me this slide. In truth, all of these younger scientists assumed that citrus trees lived a short period of time and were replaced. I then showed them the picture of the Parent navel orange tree which was 120 years old the time of my lecture and they could not grasp that a citrus tree could live that long. Today, this historical parent navel orange tree located at the corner of Arlington and Magnolia Avenues in Riverside is 134 years old. It is still bearing large beautiful fruit and is in good health. In this first of two articles I wish to relate a little of the early history of this important tree.

The first introduction of budwood of the navel orange from Bahia, Brazil to Washington, D.C. A little known history on the introduction of the first budwood is contained in a letter in the files of the National Archives in WashingtonD.C. (Moore and Moore, 1951). It was written by Richard A. Edes, U.S. Consul in Bahia, Brazil and dated January 21, 1871. The budwood was sent to Horace Capron, Commissioner of Agriculture and reads as follows: "I have the honor to acknowledge receipt of your communication of December 15, 1870. The favorite orange of this part of Brazil, and of which this province is celebrated is named the navel orange. This orange contains no seed and for transplanting, the cuttings of the tree must be used. Such cuttings are usually put into a basket of earth of the diameter of about 10 inches and the baskets to the number of 8 or 10 are packed in a large case with a glass top. In the summer season it can be forwarded without much risk. I shall be glad to forward whatever number of cuttings may be desired and would suggest the month of May as being the most suitable for the purpose." Capron replied to Edes on February 21, 1871 and on April 20, 1871, Edes acknowledged the letter and said that he would forward the desired navel orange cuttings.

The first successful introduction of the navel orange. (Dorsett, Shamel and Popenoe, 1917) reported on the recollection of William Saunders made some 29 years after receipt of budwood of the Bahia navel from Brazil. Saunders was then Superintendent of the Gardens and Grounds of the USDA in Washington D.C. and recalled that "Some time in 1869 the then Commissioner of Agriculture, Horace Capron, brought to my office and read me a letter which he had just received from a correspondent in Bahia, Brazil. Among other matters, special mention was made of a fine seedless orange of large size and fine flavor. Thinking that it might be of value in this country, I noted the address of the writer and sent a letter asking to be the recipient of a few plants of this orange. This request brought, in course of time, a small box of orange twigs, utterly dry and useless. I immediately sent a letter requesting that someone be employed to graft a few trees on young stocks and that all expenses would be paid by the Department. Ultimately a box arrived containing 12 newly budded trees and being packed as I had suggested, were in fairly good condition." In an article by (Webber (1940), he believed that the Brazilian correspondent was the Reverend F.I.G. Schneider. It is possible that the initial letter was that of Richard Edes and the date was not in 1869, but January of 1871. The second shipment of budded trees may have been sent by the Reverend F.I.C. Schneider to William Saunders, as suggested by Webber (1940).

There is much debate on the arrival of the parent navel orange trees to Riverside, California from WashingtonD.C. After the trees were received from Bahia, Brazil they were budded to a rootstock by Saunders in Washington and most were sent to Florida, where they did poorly. Accounts put Eliza Tibbets in Washington, D.C. in 1873 (McClain, 1976). "She was an old friend of the Saunders and while visiting with them, Mr. Saunders showed her the young navel orange trees." McClain further stated "That no one made note of this historic event is not surprising since new varieties were constantly being brought into the area by the new settlers.

The new colony of Riverside was only 4 to 5 years old when the trees arrived." Esther Klotz, a renowned historian on the tree, in hand written notes on the Washington navel cited evidence for the arrival of the tree on December 10th 1873 after being a month on the way (Klotz, 1972).

McClain (1976) reported that the fact that the trees arrived safe and sound was a small miracle. The trees were shipped by rail to Gilroy via San Francisco, and then by stage coach from San Francisco to Los Angeles, taking 3 days for the stage trip. She wrote that Luther and Eliza Tibbets drove 65 miles in their buckboard wagon from Riverside to pick up the precious package. It is reported that perhaps three trees were planted, but that one had been trampled by a cow. It is widely accepted that Eliza Tibbets took care of these trees and used dishwater to keep them alive, since they were not connected up to the canal water (due to the contentious behavior of Mr. Tibbets who refused to pay for water rights).

The first fruiting of the Washington navel orange. McClain (1976) reported that the first navel oranges were not produced on the trees at the Tibbets home, but rather from that of the neighbors McCoy and Cover who had budded existing seedling trees with budwood from the Tibbets' trees when they had first arrived. Commercial exposure came with the areas first citrus fair in 1879 where the seedless navel oranges won first prize over all competition. This created a demand for budwood and a fence had to be erected around the two original trees at the Tibbets’ home to prevent theft. It is said that $1.00 a bud was paid by people anxious to get buds.

On April 23rd 1902, one of the  two parent navel orange trees was transplanted from the Tibbets homestead to its present location in a small fenced park at the corner of Arlington Avenue and Magnolia Avenue. The remaining parent navel orange tree was transplanted on May 8th, 1903 to the courtyard of the Glenwood tavern, now known as the Mission Inn.

The fact that a President of the United States would transplant this historic tree was testimony to its importance and significance. On December 4th, 1922 the Riverside Daily Press reported that the parent Washington navel orange tree, which had been replanted to the Mission Inn patio in 1903, had been removed following its death. It was noted by local townspeople that the tree had begun to fail rapidly after the death of President Theodore Roosevelt in 1919 who had assisted in the transplanting ceremony.

A new home. Figure 6 shows the parent Washington navel orange tree in its new home at the corner of Magnolia and Arlington Avenues about 1920. It is in a small park dedicated as the `Eliza Tibbets Memorial Park’ under the care of the Riverside Parks Department. The transplanted tree appeared in good health as shown in this picture. The parent Washington navel orange tree in its small park in Riverside began to show decline about 1915‑1917.  In Fig. 7 we see the tree in very poor condition suffering from Phytophthora (gummosis) root rot. The loss of this tree historic tree would have been tragic, since it was  one of the two original parent trees still surviving from the first shipment to California in 1873. 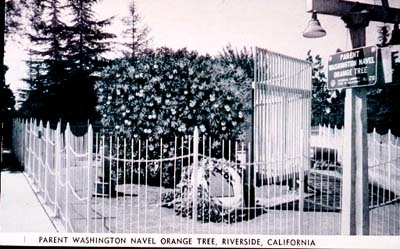