The Parent Washington navel orange tree. Its decline and recovery
Published on: June 5, 2013

The early history of the parent navel orange was presented in the last issue of Topics in Subtropics as “The Parent Washington navel orange tree - Its first years”. Included in that article were the early shipments of budwood and trees of a navel orange from Bahia, Brazil to the gardens and grounds of the Department of Agriculture in Washington D.C. From there shipment of trees were made by rail and horse drawn wagon to the home of Eliza and Luther Tibbets in Riverside California.

When the trees fruited at the Tibbets’ home yard there was much interest and excitement in this new orange. Greater recognition came when the fruit were exhibited at the local fairs. Shortly thereafter a new industry was born, beginning in Riverside and extending to surrounding communities. What was it about this navel orange that made it become such a popular and important fruit? This was a citrus unlike any of the seedy oranges that existed at the time from seedling trees. The navel orange was larger, contained no seed, had a superb sweetness and flavor, peeled easily, had a bright orange color and matured for the winter and spring months especially around Christmas and New Year period.

In the concluding part of the previous article, two pictures were shown of the parent Washington navel orange tree in the early 1900's. One picture, taken about 1910 in its dedicated park at the corner of Magnolia and Arlington avenues and showed the tree in apparent good health. The second picture taken about five to seven years later showed the tree declining with yellowing leaves and suffering from disease which was later confirmed as Phytophthora (gummosis) root rot. This declining tree was one of the original two trees which had been transplanted from the Tibbets’ home yard. We show again this declining tree in Fig. 1. The possible loss of this historic tree would have been tragic, since its sister tree at the Mission Inn was also showing signs of decline. This sister tree, also taken from the home of Luther and Eliza Tibbets, had been transplanted in 1903 to the world famous Mission Inn in Riverside. Fig. 2 shows this tree at the Mission Inn about 1920. On December 4th, 1922 the Riverside Daily Press reported that the tree at the Mission Inn had died and had been removed. It was noted by local townspeople that the tree had begun to fail rapidly after the death of President Theodore Roosevelt in 1919 who had assisted in the transplanting ceremony.

The stump of the parent Washington navel orange tree which had died at the Mission Inn was given as a gift by Archibald Shamel, a leading horticulturalist, to Sir Percy Fitzpatrick who was visiting Riverside at that time. Sir Percy Fitzpatrick was a famous writer and owner of Amanzi Citrus Estate near Port Elizabeth, SouthAfrica. The plaque on the stump reads:

This historic stump of the parent Washington navel orange tree now resides at the home of Patrick and Marina Niven at the Amanzi Estate in Uitenhage, South Africa.  Patrick Niven was a highly respected citrus nurseryman in South Africa who passed away in 2009.

Facing the inevitable loss of the parent navel orange tree in its dedicated park, a decision was made by the University of California scientists to try to save this tree by inarching. The tree had been girdled by gummosis and was rapidly deteriorating. The inarching was done by Dr. H. J. Webber, H. W. Mertz and Glenn Blackman.  They inarched with seedlings of sweet orange, rough lemon and sour orange. The gummosis lesions can be seen in the lower trunk just above the top of the protective cylinder. Dr. Klotz again photographed the inarches on July 17, 1944, twenty six years after the initial inarching was done in 1918 and the inarches are shown on the right in Fig. 4. In 1951, it was noted that some of the original inarches showed lesions of Phytophthora.  Therefore, in that same year, a second inarching was done using three seedlings of Troyer citrange and one of trifoliate orange. The grafting was done by Denard C. Wylie, Senior Superintendent of Cultivations at the Citrus Experiment Station.

The survival and preservation of the parent ‘Washington’ navel orange tree was dependant on the successful inarches made in 1918 and repeated again in 1951.   This same fungus killed its sister tree at the Riverside Mission Inn in 1922. However, the timely inarches saved this historic tree.  The tree was in good health and bearing a good crop of fruit. In the foreground in this picture is a plaque honoring Mrs. Eliza Tibbets. The plaque reads:

"To honor Mrs. Eliza Tibbets and commend her good work in planting at Riverside in 1873, THE FIRST WASHINGTON NAVEL ORANGE TREES in California, native to Bahia, Brazil, proved the most valuable fruit introduction yet made by the United States Department of Agriculture. 1920"

A sign on the lamppost adjacent to the parent Washington navel orange tree reads “Historical Landmark No. 20.  Although it is marked as number No. 20, it has been reported to be the first Historical Landmark so designated by the State of California.

Conference on the health of the parent navel tree Sept. 2006

At the request of Robert Johnson and Alisa Sramala with the Planning and Design Division of Riverside Park and Recreation Department, a meeting was organized at the parent ‘Washington’ navel orange tree with the objective of studying the general health of the tree and obtaining directions on the best way of maintaining it to ensure its longevity. In response to this request, Dr. Tracy Kahn organized a meeting of concerned individual at the tree site on September 29, 2006. Those present at this meeting are shown in Fig. 7. At that time the tree was in excellent health, with large leaves and a good crop of large sized fruit. Discussion was held on various aspects for the continued maintenance and improvements for the health of the tree.

The impact of the Parent navel

In the early 1900's the impact that this single tree had on the city of Riverside and on the surrounding area was profound. Considering that Riverside had been founded in 1870 and that most of the cities in the region were also founded about this same time, the commercial impact of this tree was of great importance on the development of a number of cities in the region and also throughout southern California. One can still see the large two storied homes when traveling from Riverside to Redlands. These homes were designed so that one could see above the orange groves which filled much of area in the region at that time. The population of Riverside in 1880 was only 368 and a little over 1000 in the surrounding areas.  Citrus orchards increased and flourished throughout the region and the navel orange became its most important major agricultural crop. The region around Riverside and its surrounding areas was ideally suited for this tree.  The small trees sent from Washington D.C. and nurtured in the Tibbets home yard could not have been planted in a more favorable environment for the full development of the deep orange color and superb flavor of the fruit.

Our indebtedness to this mother tree

Little did Eliza or Luther Tibbets fully realize or could have predicted the impact that this tree would have, not only on the development of southern California, but on world citriculture. This tree was responsible not only for the creation of a citrus industry in California, but for the establishment of the world famous Citrus Experiment Station. It was responsible for the iced railroad cars, for the creation of the Sunkist and other cooperative marketing organizations, for the introduction of various insects to control serious pests, for research on decay control, for the creation of packing houses and the many jobs and small industries associated with citrus. In many ways it was also responsible for the growth and early development of many cities in southern California extending from Ventura by the sea to Yucaipa at the foot of the San Bernardino mountains and extending north to the cities in the rich farmlands of central California. We in California and throughout the world have been indebted to this remarkable tree, listed as the most important plant introduction made into the United States!

For a full picture history of this extraordinary and famous tree visit the United Nations website. This URL will get you directly to this slide show #79 on the parent Washington navel orange: 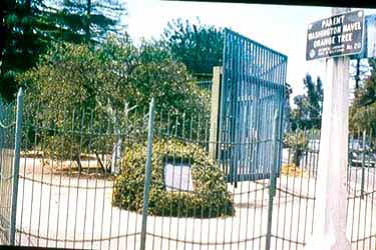