An Australian scientist interviewed for the article said that assigning a name without nailing down a syndrome is distracting.

"It's misleading in the fact that the general public and beekeepers and now even researchers are under the impression that we've got some mysterious disorder here in our bees," he was quoted. "And so researchers around the world are running round trying to find the cause of the disorder - and there's absolutely no proof that there's a disorder there."

The story included a video featuring UC Davis entomologist Eric Mussen. He provided information about what is perhaps one component of the problem plaguing bees, the varoa mite.

He said the mite is quite large compared to the honey bee.

"It would be sort of like having something the size of a softball running around on your body," Mussen said. 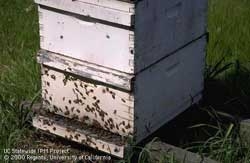