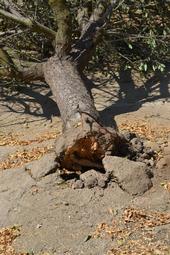 A fallen almond tree that was weakened by Ganoderma fungus. (Photo: Bob Johnson)

The state's fruit and nut orchards are taking the most heat as conditions change. A fruit or nut tree planted today may be ill-suited to climatic conditions by the time it begins bearing fruit in 5 or 10 years. Between 1950 and 2009,...

Ceres puts equipment on low-flying airplanes to take pictures that will help farmers optimize water and fertilizer application. According to field tests, the imagery works. Since 2014, Ceres has teamed up with UC Cooperative Extension to conduct field trials, including one for the Almond Board that measured the response of nuts to different rates of...

A bee pollinates an almond blossom under sunny skies.

“You don't need them to all be pollinated,” he said. A pollination rate of 40 percent would make a great year. Twenty five percent will still produce a decent crop.

The heavy rain, wind and cold temperatures that have characterized January and February 2017 could be overcome with just a bit of warm, sunny...

Almonds in the California's Central Valley will soon bloom in preparation for pollination and production of the 2016 almond crop.

A surge in the price of almonds in 2014 has cut demand and resulted in a lower price for the 2015 California almond crop, reported Tom Philpott in Mother Jones.