After measuring their wings and gently blowing aside the feathers on their tiny pink abdomens to determine gender and general health, Clevenger sets the birds free. All the data is recorded by California Naturalist Jen Cubias.

Both Cubias and Backlund were members of Sagehen’s first class of California Naturalists, who were certified in 2012. Another 10-week class is underway at Sagehen this summer and an intensive one-week class was held July 8-14. California Naturalist classes are being offered by University of California Cooperative Extension and collaborating organizations up and down the state, including Santa Barbara, Santa Cruz, Sonoma, Mendocino, Santa Ana and Pasadena.

The program champions the state’s unique ecology and engages volunteers in stewardship and study of California’s natural world. A love of nature and a desire to share their passion prompt people to commit time to becoming and serving as California Naturalists. California Naturalist is modeled after other successful volunteer outreach programs sponsored by UCCE. The Master Gardener program was launched in 1980; the Master Food Preserver program, also in place since the 1980s, has recently seen a dramatic resurgence in interest. The California Naturalist program uses a science curriculum, hands-on learning and volunteer service to inspire stewardship of the state's parks, wetlands, coastal areas, mountains, foothills and forests.

Forest ecology is a natural for the Sagehen Creek course. The woods of the Sagehen Creek watershed were clear cut in the late 1800s to build the Transcontinental Railroad and shore up mines in Virginia City, said Sagehen director Jeff Brown.

Trees grew back, but the suppression of intermittent fires that under natural circumstances create a diverse forest environment with sugar pine, Jeffrey pine and ponderosa pine instead favors dense stands of white fir and underbrush, which could fuel a catastrophic fire.

“It’s time to do something,” Brown said.

“According to computer models, these treatments will work like speed bumps for fire,” Conway said. “We’ll also be encouraging a return to Sagehen’s natural forest diversity.”

Mike Hamilton, a lifelong naturalist and director of UC’s Blue Oak Ranch Reserve in Santa Clara County, took Sagehen’s aspiring naturalists on a botany tour of the station. With the diversity of plants to view, the group didn’t go far.

“A typical botany walk is 100 inches, and then the day is over,” Hamilton said. Round-leaved sundew.
Blooming wildflowers in July included Ranger’s buttons, royal penstemons, Sierra tiger lily and columbine, but the highlight was tiny red round-leaved sundew hidden among the grasses, rushes and sedges of the fen. A saturated meadow, a fen is something like a bog, in that soil chemistry inhibits decomposition so organic material builds up. However, it is on a slope so water continuously flows through.

The sundew is a native carnivorous plant with prickly leaves that emit a sticky liquid, trapping tiny insects for food.

“It’s the coolest plant in the Sierra Nevada,” Hamilton said.

A session on wildlife included hands-on viewing of preserved wild animals that are found at the station, including bats, shrews, mountain lions, beavers and flying squirrels. During a water monitoring session, naturalists analyzed water samples to determine the dissolved oxygen, nitrate level and alkalinity in Sagehen Creek. “This valley was here at least 5 million years before Yosemite Valley was formed,” Raines said. “But it wasn’t 7,000 feet high back then.”

During a geology walk, Raines asked the group how a several million-year-old and very large granite boulder could be found on top of the much younger andecite deposit.

“Probably a glacier,” he said.

Learning about nature is critical for California Naturalists, but learning to interpret nature is equally important. The program prepares its volunteers by introducing the iNaturalist.org website/app for cataloging observations of plants, insects and wildlife into a database that can be used for scientific research. The aspiring naturalists also learn about interpretation of nature through art – such as storytelling, journaling, photography and drawing.

“Interpretation involves making meaning and forming connections, not just rattling off facts,” said Laura Cassidy Rogers, a doctoral student in modern thought and literature at Stanford University. “Let the natural world be your guide. Capitalize on happenstance sightings and zero in on what your constituents find interesting.”

All participants conduct a “capstone project” to complete California Naturalist certification. The capstone encourages the naturalists to apply their new skills by taking part in citizen science, offering interpretive opportunities to the public, providing program support to their sponsoring organizations or conducting stewardship work that benefits the California natural environment. To learn more, see the California Naturalist website. 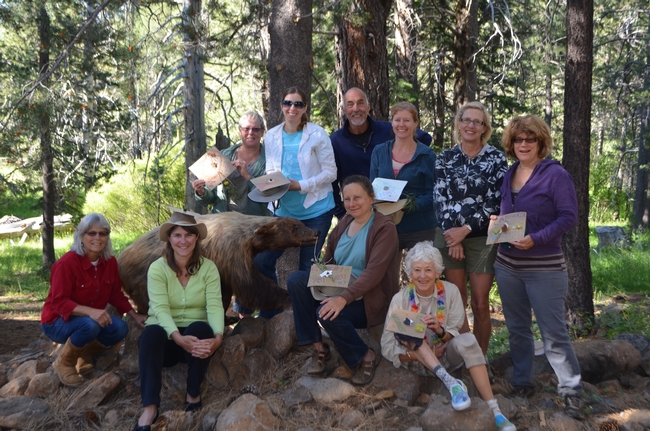 Teacher Leslie Smith (left) poses with the nine new California Naturalists who completed one-week of intensive training on July 14.
Tags: California Naturalist (22)
Comments: 6
Comments:
by Kit Veerkamp
on July 22, 2013 at 10:53 AM
Great article! This does a great job of explaining more about the California Naturalist Program.
by Brook Gamble
on July 22, 2013 at 12:27 PM
Wonderful, Jeannette, thanks! This really captures a day in the life of a California Naturalist! We're so glad you took the class and have written about it in your clear, enthusiastic voice!!
by Faerthen Felix
on July 22, 2013 at 1:24 PM
What a great description of the program--thanks, Jeannette!
by Adina M. Merenlender
on July 23, 2013 at 2:47 AM
Sounds like it was an amazing week! Thanks for sharing and wish I could have been there.
by Kathleen Claxton
on July 23, 2013 at 7:27 PM
Jeannette, thanks for a great story. Our group was lucky to have you, an excellent communicator, in our California Naturalist class.
by offpageservices
on January 19, 2014 at 10:11 AM
I simply could not depart your website before suggesting that I extremely loved the usual info a person provide to your guests?
Is going to be back regularly in order to investigate
cross-check new posts
Leave a Reply: