If you read my July post on stunting sunflowers, you know I tend not to follow convention.  But as I said then, the joy of gardening is in the hands of the individual.  So this post on re-purposing a tree stump should not surprise you.

My driveway used to be lined with 50 plus year old Monterrey pine trees.  But the past few years I’ve had to have several of them removed because they’ve been killed by tree borers.  For the most recent pine tree I had cut down, I decided not to have the tree service remove the stump for budget reasons.  Instead I had them just cut the stump down to about waist high.  My idea at the time was to use the stump as a huge plant stand for one of my enormous planters.  That idea quickly fell apart because my huge planter was just too heavy for me to lift onto the tree stump.

So I thought why not just plant something directly on top of the stump.  To keep the soil confined to the top of the stump, I purchased some cheap plastic lawn edging, cut it the size of the stump, and fastened it together into a circle.  I laid it on top of the stump and filled it with potting soil.  I planted succulents around the edges, but I wanted a deeper soil depth to plant some marigolds.  So I cut and fastened a smaller circle of lawn edging and centered it on top of the already poured potting soil.  I filled the smaller circle with soil and planted the flowers.  And since I had another potted flower plant I haven’t decided where to plant yet, I plopped it into the center of the second circle for the time being.  So in the interim until I get around to having the stump removed, I have an additional planting area for annual flowers. 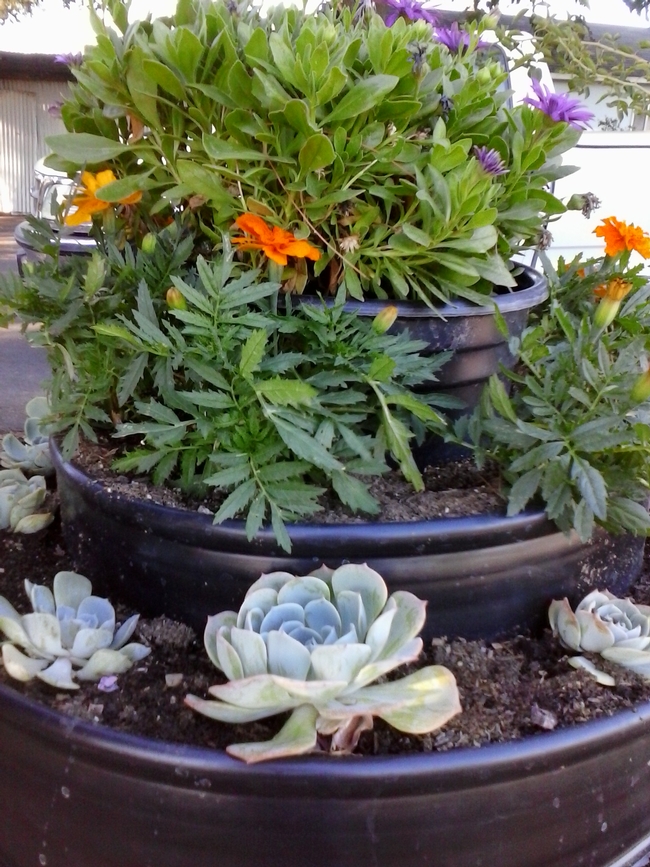 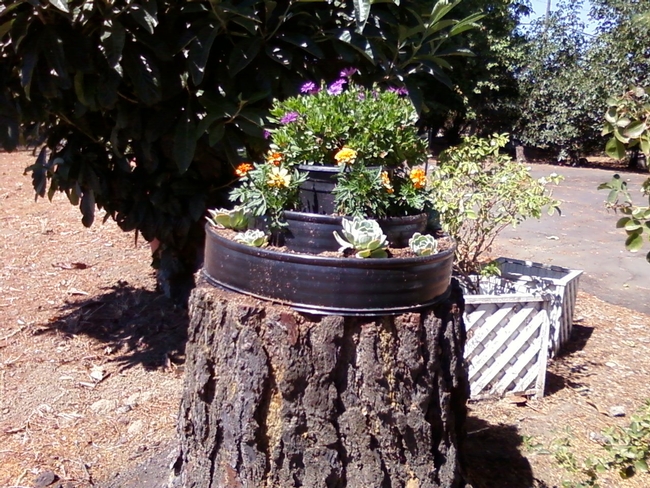 The whole view.
Tags: flowers (17), planter (1), repurpose (2), stump (1)
Comments: 3
Comments:
by Pam schmidt
on April 17, 2016 at 2:31 PM
I really like this idea much more than carving out the center part of a stump to plant inside it. What did you use to connect the lawn edging in a circle?
by Kathy
on April 17, 2016 at 4:10 PM
I used binder clips, and since I used black lawn edging, I used black duct tape to tape over and around the binder clips to further help hold the circle in place.
by North Shore
on December 27, 2019 at 12:38 AM
Very interesting blog. Thanks for sharing.
Leave a Reply: