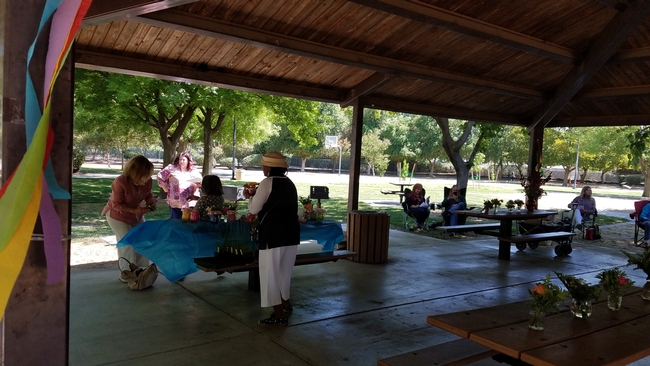 Torrey pines are the rarest conifers in the United States.  We are lucky to have a few in the UC Davis Arboretum, but these trees did not arrive here on their own.  The trees' native locations are the California coast from San Diego to Del Mar (now Torrey Pines State Natural Reserve) and another subspecies 175 miles away on the eastern coast of Santa Rosa Island, now part of the Channel Islands National Park.  The tree was first “discovered” in 1850 by Charles Parry M.D. who named it after his professor John Torrey M.D.

Almost all California pines grow in higher altitudes with cooler climates.  Amazingly, these trees survive on 10 inches of rain/year in a hot, semi-arid Mediterranean climate at 100 – 500 feet above sea level.  They have adapted by developing deep and extensive root systems, often at least twice as deep as the height of the tree, and growing longer needles (9 – 13 inches) in usually bundles of 5 needles per fascicle to catch more of the morning fog common along the San Diego coast.  They are found along canyon ridges, mesa tops, or seaside slopes with sandy or sandy-loamy soil.  When the soil erodes, the extensive root system emerges.  Trees that have more wind protection grow to about 70 feet, but those exposed to the ocean winds are “salt-pruned” growing prostrate and/or contorted.

One of the reasons this tree is so rare is that its seed dispersal system isn't all that efficient.  The male cones grow upright on the bottom of the tree and the female cones on the upper part of the tree.  The male cones need a good crosswind to float the pollen from the next tree. The scales on these large cones stay open until the seeds are pollinated.  They then close and turn downward.  When the seeds are mature, the scales open very slowly and the seeds fall down.  The seeds don't all come tumbling out at the same time.  The large, heavy cones can stay on the tree for 15 years!  Seeds can be released slowly from 15 months after pollination through the time they remain in the cone on the tree.  True for all pine trees, it takes 15 months from pollination to fertilization.  Blue jays have been found to be helpful in seed dispersal.

Another factor leading to Torrey pines' rarity is that the trees are dying from damage due to bark beetles. These beetles co-evolved with the pine trees.  The two causing the most damage are the California 5-spined engraver beetle (Ips paraconfusus) and the Red Turpentine beetle (Dendroctonus valens).  When a tree is bored by a beetle, the sap is released.  If the tree has been getting enough water to produce a good amount of sap, the beetle is drowned by the sap.  In drought years, however, there isn't as much moisture for the tree to produce the needed amount of sap.  California 5-spined engraver beetles bore into the upper part of the tree and can be recognized by the frass they leave on the tree's bark from the borings.  Red Turpentine beetles mine under the bark at the tree's base large roots.  They leave large pitch tubes made of the borings mixed with the pine's sap.  The tunnels are pinky-brown to white.  Both beetles mine the phloem-cambium region under the bark and lay their eggs in the tunnels they create.  Beetle traps are used to monitor the trees in the reserve and in the national park for evidence of the beetles.  The area covered by one trap for purposes of killing the beetle is not very big, so a vast number of traps would be needed to contain the problem.

The Torrey Pines State Reserve gets 9000 visitors a day and up to 15,000 on the weekends. (pre-COVID statistics).  If you go, go early in the day and in the middle of the week. Otherwise, go locally.  One Torrey pine can be found in the UCD Arboretum redwood grove.  A group of Torrey pines is located just off the decomposed granite pathway about 100 feet east of the acacia grove.  It's a little closer and a lot less crowded to see the rarest and one of the most remarkable California conifers. 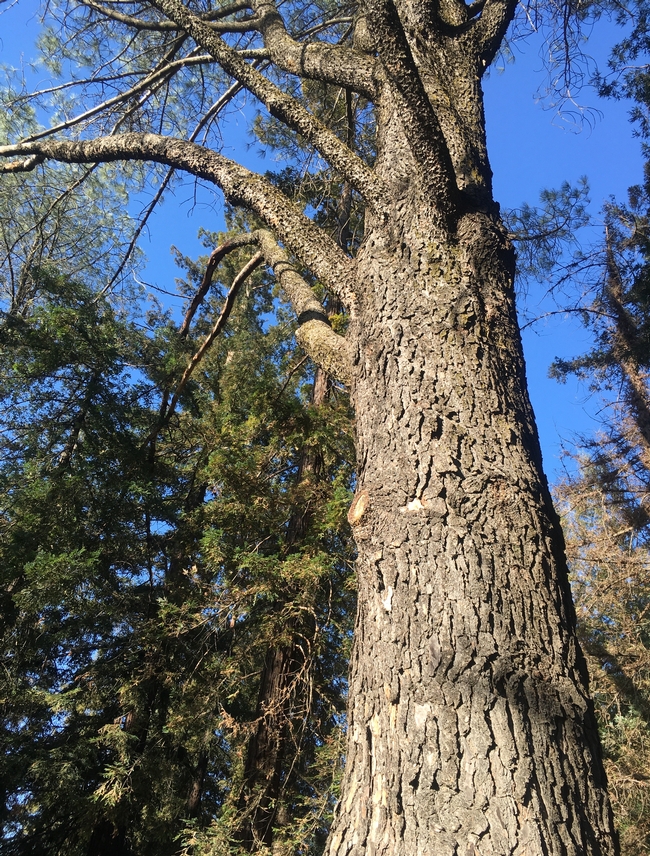 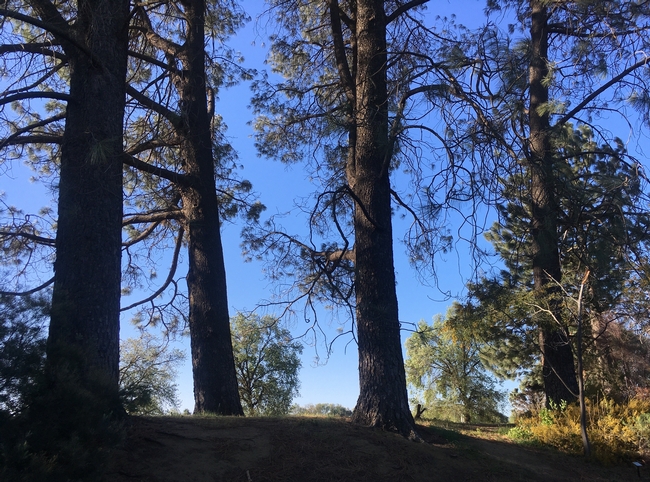 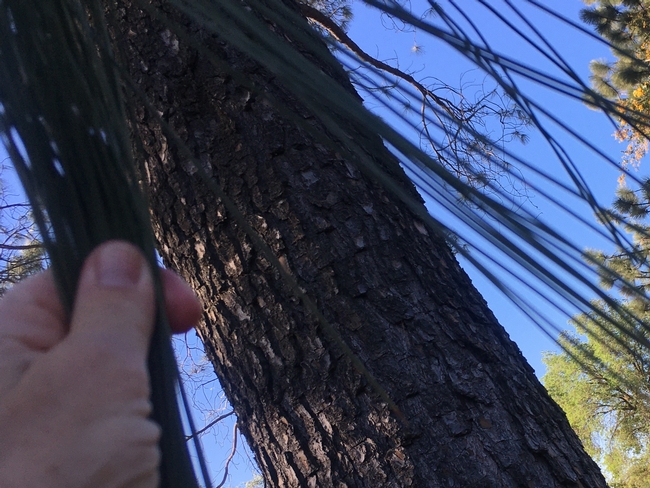 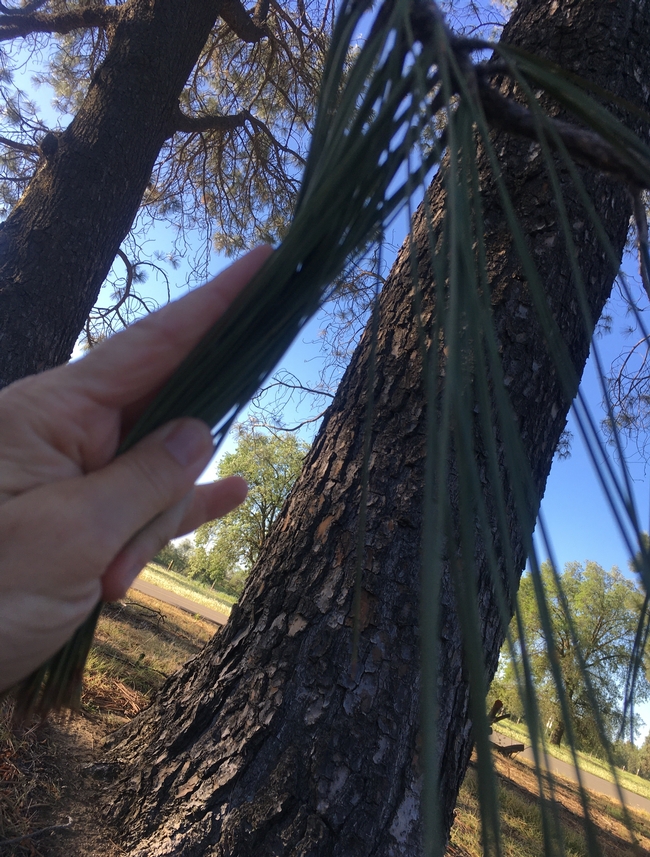 We have the pleasure of having red tail hawks near our house. Every year around November the Red Tail hawks show up for a visit. Sometimes they stay through the winter but most years they don't. The female comes back around January 15th like clockwork and waits for the male to show up. They clean up the nest and add new branches, which takes about a week. This year, the hawks kicked out the owl twice. Hummingbirds often create nests below the hawks and benefit from the hawk's protection from other birds such as blue jays. The tierces (male) and hen (female) will court. They fly with their legs beneath them and swoop after each other, sometimes locking talons. The lifelong pair will fly in large circles and gain great height, then the male plunges into a deep dive and does a subsequent steep climb back to circle some more. It's a lovely sight to see. This year will be the seventh year they have come to mate. We love to listen for the females' call as she sits incubating the eggs, waiting to spot her companion. She'll start screeching “kree-ee-ar” and in a minute or two, we'll see the male, coming in to bring her a meal. One day he brought in a big, big snake and we heard it thump into the nest as he dropped it. He then took a portion and had a meal too. Their nest is huge! It's probably 5 feet deep and 6 feet in diameter. It's much larger than usual. We are keeping the windows open in anticipation of hearing the eyas (newborn) hawks. The eyas will stay in the nest for approximately 42-46 days after hatching. The parents will sleep in the nearby trees near the nest, up to 100 feet away, watching carefully over their youngsters. One year they had two eyas. As we watched them grow, one of them was clearly a female. She was twice the size of any of the fledglings we'd seen over the years. She was timid and didn't want to practice flying from the nest. The father was in the nearby redwood calling to her to come and try to fly to the neighboring tree. Then the female would try to. Her brother was going from the adjacent tree and back to the nest. It took 3 days of enticing before she finally got up the courage to fly over. The parents will teach the eyas for 1-2 years to prepare them for life. Hopefully, the parent hawks will bring many eyas into the world and they live to find a mate and continue the circle of life.

The call sounds like kree-ee-ar. Most movies use a Red Tail hawk call when representing eagles and other hawks.

Vision - can see a mouse 100 feet from up in the air. Fly 120mph to catch said such prey. They tilt their head back and forth to triangulate an object and see how far away it is. They have a third eyelid that moves side to side to keep eyes moist and clean.

Courting – they fly with their legs beneath them and swoop after each other, sometimes locking talons.

They fly in large circles and gain great height, then the male plunges into a deep dive and does a subsequent steep climb back to circle some more. They mate for life.

They have soaring behavior and “kite” in stationary hover in the wind.

They eat voles, mice, rats, ground squirrels, rabbits, snakes, fish, insects, and carrion. Birds like pheasant, bobwhite, starlings, blackbirds. Can carry prey up to 5 lbs. Which is larger than them.

I hope you get a chance sometime this year to stop and watch the Redtail hawks.

I am not sure which nursery this plant came from. I have it growing in my garden now.  I think it came from Sacramento since I seem to go to different nurseries in Sacramento mostly or it could have come from one of the UC Arboretum plant sales.

My germander is about 4 years old, and it is the variety ‘Azurem' which is supposed to grow 3-4 feet and spread as wide. It is considered a dwarf or compact variety because of its growth pattern. This plant is very drought tolerant and needs deep watering only about every 2-3 weeks. It wants sun but can tolerate some shade.  It also can tolerate heat, winds (which here in Fairfield-we sure have them ) as well as frost. So, I think it makes it almost the perfect plant.

The bees really love this plant, one very good thing is its disease and insect resistance. I have not seen any of these problems since I have grown this plant. It has silvery foliage underneath the leaves with small blue flowers that bloom from early spring until very late fall.  You can train it into a hedge, use it as a background plant, or as I am going to let it do its own thing. It is in a spot where can spread out the 3-4 feet as the information on it says it can.  If it does get out of control it can be pruned back. 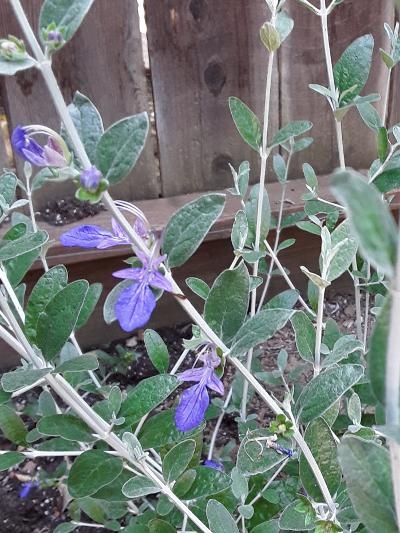 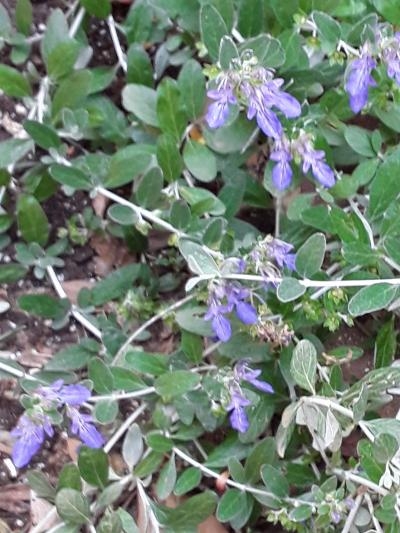 As I've noted in a previous blog, the sign of a good garden tool is when my husband steals it from me repeatedly.  The fact that he then bought a second one of the same tool, so that he could have both right- and left-handed versions is even more telling.

The Japanese weeding sickle, or nejiri gama, is a razor-sharp, lightweight, weeding sickle that is excellent for shallow weeding and slicing.  It is sharply pointed on one end, which is useful for weeding in cracks, tight spaces, around the base of plants, and for digging out the bulbs of certain weeds.  The sickle has a very sharp offset blade that can cut through grass and plant roots.   The tool comes in different handle lengths — regular (approximately 13 inches), long (approximately 17 inches), and full length (e.g., 56 inches or so).  It comes in right-handed and left-handed versions.  There a variety to choose from and some boast ergonomic design, but we just use an inexpensive regular (short-handled) one that works just fine for us.

Did I mention that this tool is extremely sharp?  It should not be left around children, where a pet could step on it, or any place someone might accidentally touch it without its protective case.  We have been happily weeding away (well . . . ) and cut various thicknesses of irrigation tubing on several occasions without feeling any resistance.

As a lightweight, efficient, handheld weeding tool, the Japanese weeding sickle is a winner in our household! 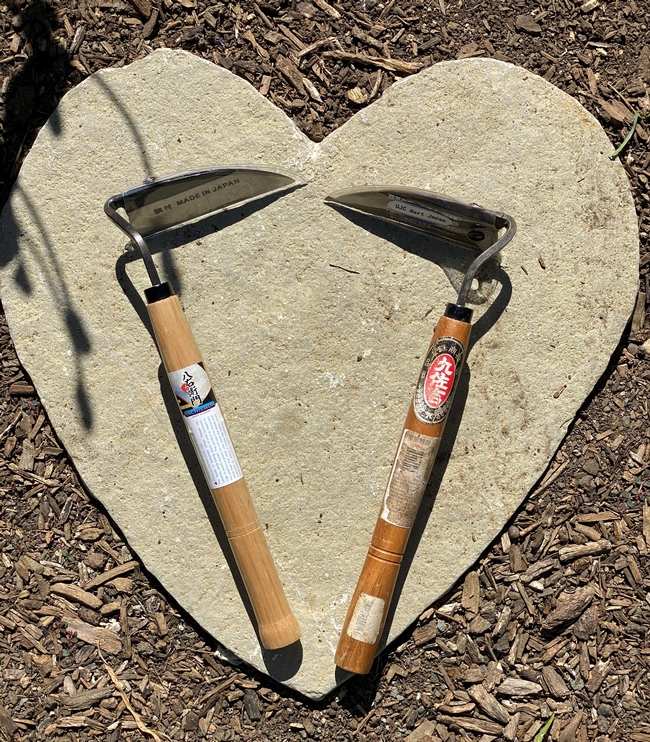