Bug Squad
sitenum=63
Happenings in the insect world
NIMBY? Yes, When It Comes to Butterflies! This is a common Gulf Frit caterpillar on a passionflower vine. (Photo by Kathy Keatley Garvey)
NIMBY isn't always a negative or contentious term.

NIMBY--"Not in My Back Yard"--is a term used to target unwanted development projects in a neighborhood. Irate residents ban together and tell a governmental agency, such as a city council: "Not in My Back Yard!" For example, they don't want that chemical plant, prison, toxic waste dump, strip club or casino next to them.

But if you have butterflies in your back yard, NIMBY doesn't apply.

It's a joy to see them fluttering around the yard--the females laying eggs and the males cruising for a "date."  From the eggs to the caterpillars to the chrysalids to the adults--the Gulf Frit population keeps expanding.

Then, surprisingly, we spotted an unfamiliar-looking caterpillar among all the rest.

"What is this?" we asked noted butterfly expert Art Shapiro, professor of evolution and ecology at UC Davis, who monitors the butterfly population in the Central Valley and maintains a butterfly site.

"It's the melanic phase of the Gulf Frit larva, well-known in the southeast United States and in South America, but I've never seen one in California," Shapiro said. "Presumably genetic, but the genetics have not been worked out. See if you can breed from it!"

Well, what to do? We popped the VIP (or rather VIC for "Very Important Caterpillar") in our butterfly habitat container, newly purchased from the Bohart Museum of Entomology.

The container is now home to a dozen caterpillars, six chrysalids, and one VIC.

But breeding the butterfly? First, the caterpillar would have to form a chrysalis. Then, if and when the butterfly emerges, we'll have to determine the gender, provide a mate, and see if anything happens. 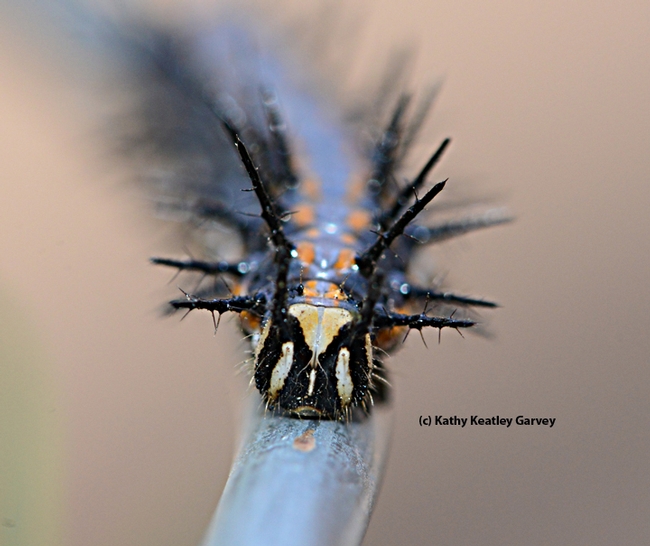 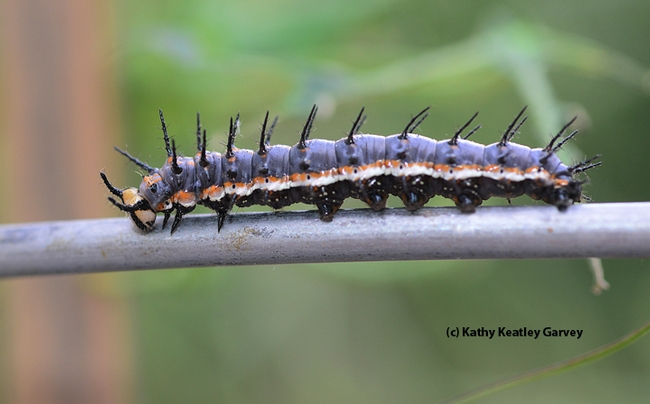 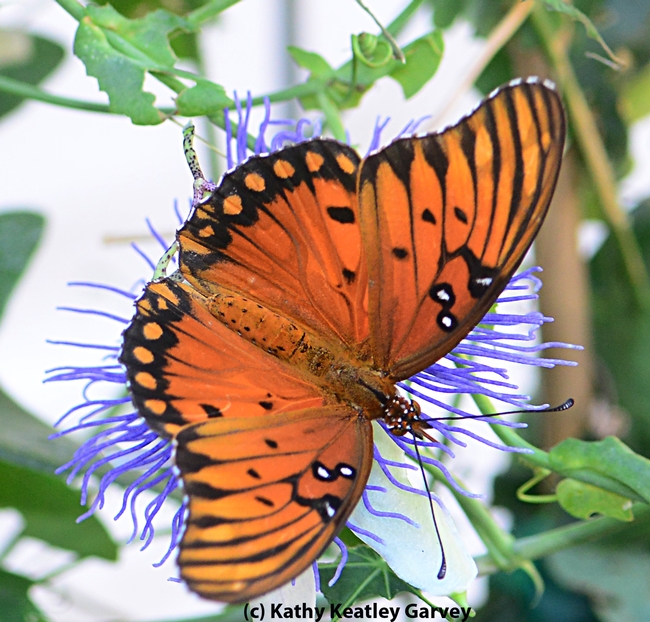 An adult Gulf Fritillary on a passion flower. (Photo by Kathy Keatley Garvey)
Tags: Agraulis vanillae (81), Art Shapiro (261), Gulf Fritillary butterflies (10), melanic phase (1)
Comments: 2
Comments:
by Suzanne Clarke
on November 6, 2016 at 3:41 PM
I found one today on my Passiflora sanguinolenta and have brought it in with my other Gulf Fritillary caterpillars to see what the chrysalis and butterfly look like!!
by John Isenberg
on June 2, 2017 at 8:30 AM
Thanks for posting these great photos. I ran across a caterpillar like the one shown, then used Google Images to find this web page. For years I had believed the orange butterflies in my back yard were "Painted Ladies," so finding out they're actually "Gulf Fritillaries" was a revelation! And yes, we do have a passionflower vine. We live in Pasadena.
Leave a Reply: