UCCE featured in article about ag technology in Salinas Valley
Published on: October 23, 2013

Reporter D. L. Taylor opened the web version of the article with a 90-second video clip showing Richard Smith, UCCE advisor in Monterey County, in a spinach field talking about the amount of nitrogen the crop takes up.

Smith is conducting field trials on ways to more efficiently apply fertilizers, the article said. He is working with a product that works similar to time-release medicines that meters out nitrogen over an extended period. The system is expected to give plants the opportunity to absorb more nitrogen, permitting less to leach below the rootzone.

Krishnamurthy Subbarao, UCCE specialist based at the USDA Salinas station, is working with colleagues to find new lines of iceburg lettuce with resistance to verticillium wilt, the article said.

A new computer software tool developed by UCCE advisor Michael Cahn and his colleagues, called CropManage, helps growers figure out how much fertilizer and water to use and when on a field-by-field basis. 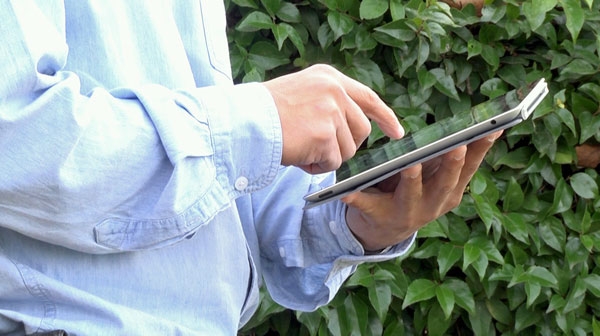 CropManage, a software tool developed by UC Cooperative Extension, can be used in the field with a tablet computer or smart phone.
Tags: Krishnamurthy Subbarao (1), Michael Kahn (1), Richard Smith (7)
Comments: 0
No Comments Posted.
Leave a Reply: