The Western bumble bee (Bombus occidentalis) seems to be making a comeback of sorts in some parts of the West.

Reporter Michelle Nijhuis, in an Oct. 14th article in High Country News, wrote that this species  was "once among the most common bumble bees in the Western United States (and Western Canada)." The population crashed in the 1990s and "all but disappeared from about a quarter of its historic range." Now, she says, it's recently been spotted in parts of Washington and Oregon.

Someone saw six species of the Western bumble bee pollinating blackberries just north of a Seattle.

We remember last year when native pollinator specialist Robbin Thorp, emeritus professor of entomology at UC Davis, was searching for the critically imperiled Franklin's bumble bee in its tiny range in northern California and southern Oregon, when a sole Western bumble bee appeared in front of him and his colleagues from the U.S. Forest Service.  It was foraging on buckwheat (Eriogonum sp.) on Mt. Shasta, above 5000 feet.

Thorp and many other scientists fear that the Western bumble bee may go the way of Franklin's bumble bee.

That's why Thorp describes the Seattle find as "very exciting."

"Any finds west of the Sierra-Cascade crest are of prime interest.  It is those western populations that took the sharp dive between 1999-2002.  They do seem to be increasing, which is indeed encouraging."

"Many populations east of the crest seem to have persisted, through this decline," Thorp noted, "but were not carefully monitored during this time so we don't have the detailed data on their population trends that we would like."

Bombus occidentalis is sometimes called the "white-bottomed bee" due to its distinctive white markings on its abdomen. It is known for pollinating blackberries, cherries, apples and blueberries. It also is "an excellent pollinator of greenhouse tomatoes and cranberries, and has been commercially reared to pollinate these crops," according to the Xerces Society for Invertebrate Conservation website.

Read about the decline of bumble bees on the Xerces website.

And if you live in the West, keep your eyes open for the Western bumble bee. 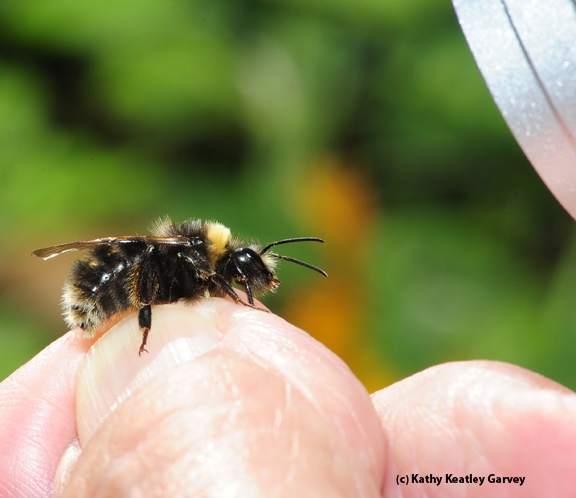 This Western bumble bee was found on Mt. Shasta on Aug. 15, 2012. (Photo by Kathy Keatley Garvey) 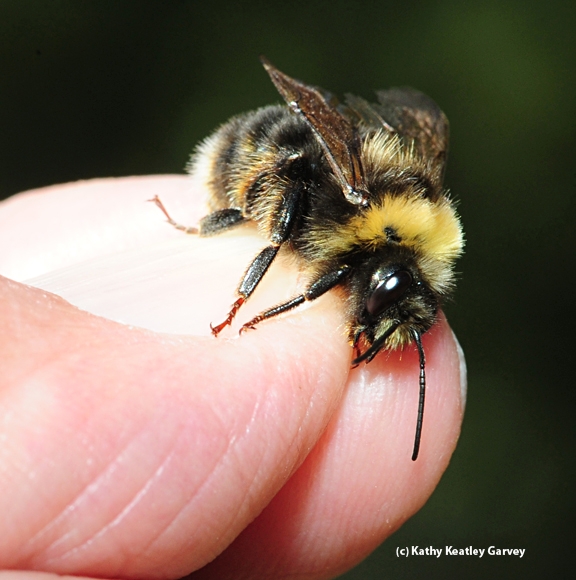