The genus of Haworthia includes more than 70 species from Southern Africa (native to), generally with fleshy leaves formed into a rosette. A pretty sturdy succulent that does not require as much light as others succulents but does require higher temperatures and more moisture than its close relatives, Aloe and Gasteria (Ox Tongue).

Haworthia are extremely variable in growth habit. Some resemble small aloes. Others make small towers of neatly stacked fleshy leaves (H. mucronata) or stem less rosettes (H. hybrid) or deep rosettes of swirling leaves (H. limifolia).   A common windowsill variety is H. subfasciata ‘Little Zebra’. Individual leaves may have pointed, blunt or rounded tips. Many species are green, but others display a range of gray, brown or reddish-brown (especially in sunlight) pigments. And leaves may be attractively marked. The leaves of some species have translucent "windows" on their upper surface. The irregular two-tipped flowers are generally small, white, tubular, and on the end have a long flower spike which can be simple or branched. Differences in flower forms are used to group individual species into sub-genres (Haworthia, Hexongulares, Robustipedunculaves). In their habitat, these succulents often benefit from the shade of shrubbery plants or rocks, which also afford protection from predators (mealybug is the main pest).

Growing Season: the winter months. Roots are often lost during summers. Watering at the wrong time of year may kill the plant, so some sensitivity to the active growing cycle is required. Propagation:   by offsets (side shoots/suckers) formed at base of larger plants. (You can also try seeds if they're available). Soil: equal parts coarse sand and general houseplant soil. (Or, try a soilless mixture.) (Or 1 part loam, 1 part leaf mold, 1 part sharp sand, ½ part crushed charcoal). Fertilize: Do NOT fertilize newly potted plants for the first year. After that, fertilize once in spring, once in fall. Avoid summer fertilizing as plant is in a short rest period. Water: allow soil to approach dryness between waterings, more sparingly in winter. The soil ball must never be allowed to dry out completely. Light: moderate; avoid excessive periods of direct sun. Temperature: 65-90° all year round. If growing outdoors, try placing pot against house where it will be protected, perhaps on the east side where it may get early sun but avoid mid and late-day sun beating down. If growing outdoors, bring it in for the winter months.

Haworthia margaritifera (pearly haworthia) and Haworthia fasciata ‘Zebra’ are extremely easy to grow. They form small rosettes of upward-curving leaves with back surfaces that are marked with various patterns of "warty" protuberances called tubercles. Both are frequently used in dish gardens. Night temperatures of 50-55°, daytime 68-72° is ideal. Repot (in flat pots) in February or after flowering has ceased in June.

H. margaritifera forms a firm rosette 3-6" across which, when looked at from above, is somewhat like a starfish. The 1½-3" leaves are dark green and thickly covered with white spots/tubercles. Long, thin flower stems develop in spring, with a number of small bell-shaped whitish flowers. It is an ideal indoor plant because of the dry air, as long as it receives lots of light. Although some sources say "full sunlight in windows facing south," I advise against excessive periods of direct sun. It is a succulent, not a cactus. It does best in bright indirect or curtain-filtered sunlight. 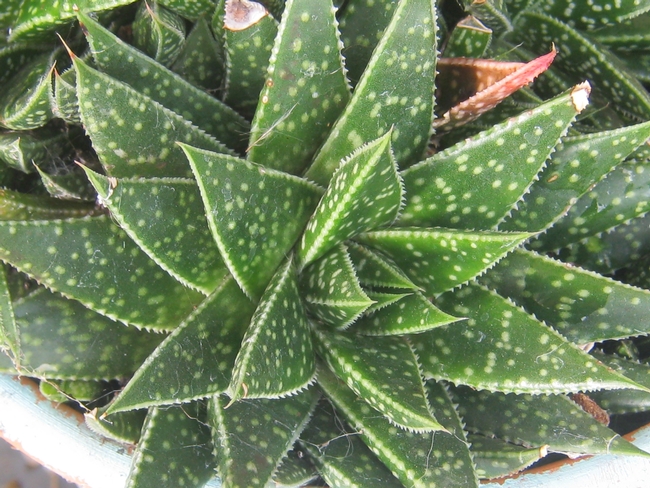 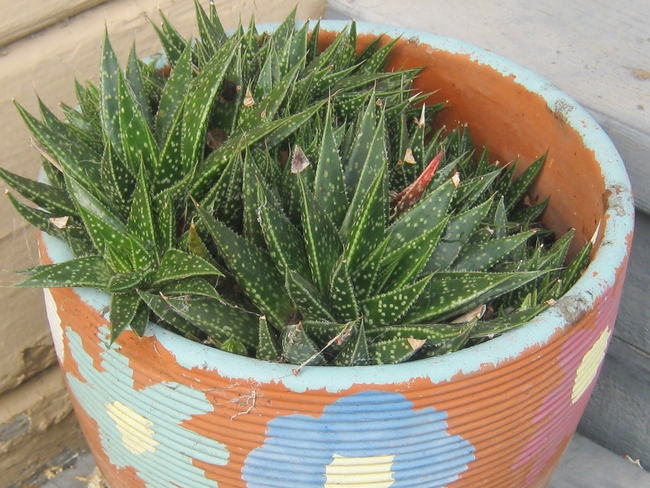 Comments: 1
Comments:
by John
on November 24, 2019 at 2:14 PM
Is the upper phot credited to Susan Croissant the H. margarita feta discussed in the paragraph above? If not, which H. is the photo, please? Thank you.
Leave a Reply: