Along about this time of year, the calls come pouring into the UC Davis Department of Entomology and Nematology and the Bohart Museum of Entomology.

It's the male Valley carpenter bee, Xylocopa varipuncta, which native pollinator specialist Robbin Thorp, emeritus professor of entomology at the Department of Entomology and Nematology at the University of California, Davis, calls "the teddy bear" bee.

But what's unusual about this bee is its color, golden with green eyes. It's sexual dimorphism at its best, because the female Valley carpenter bees are solid black.

The Valley carpenter bee is the biggest carpenter bee in California. And it scares the living beejeez (dead beejeez, too) out of young children, teenagers, and adults. Just about everybody and everything, including the family dog and cat.

As Thorp told us several years ago for a news story:

"Xylocopa varipuncta occurs in the Central Valley and southern California, Arizona, New Mexico and southward through Mexico.  It is large (about the size of a queen bumble bee), with all black females and golden/buff-colored males with green eyes.   Females have dark wings with violet reflections." 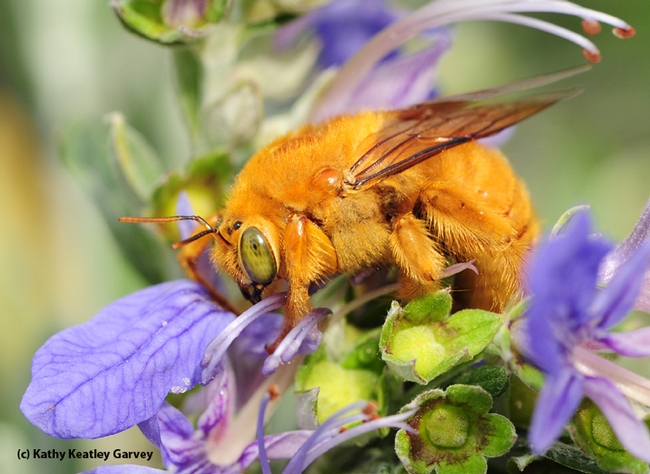 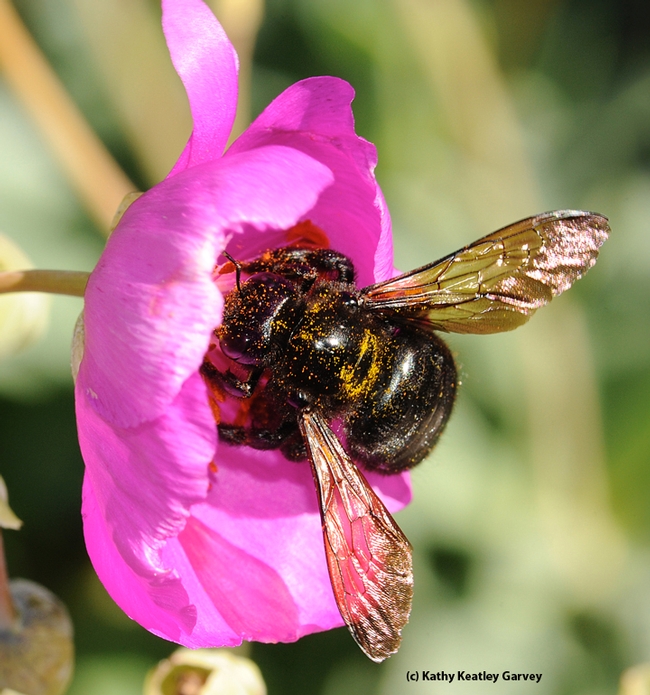 Female Valley carpenter bee is solid black. This is on a rock purslane, Calandrinia grandiflora. (Photo by Kathy Keatley Garvey)
Tags: Robbin Thorp (272), Valley carpenter bees (9), Xylocopa varipuncta (29)
Comments: 33
Comments:
by Amy Roemelen
on March 14, 2014 at 10:29 AM
Oh my goodness--he's so handsome! I have lots of the females in my garden, hope to see a male or two as well!
by Yvonne Rasmussen
on March 14, 2014 at 7:15 PM
I love these golden bees they are so pretty with the green eyes. Perhaps they are Irish with red hair and green eyes?
by R.C.Sihag
on March 14, 2014 at 8:27 PM
It is like Indian carpenter bee, Xylocopa pubescens. Here male is fully yellow whereas female has yellow pubescence on the thorax. Contrary to this, in Xylocopa fenestrate, both male and female are jet black.
by Pillas
on March 14, 2014 at 11:58 PM
Quelle surprise de voir une telle différence entre mâle et femelle !
by Neozinho
on March 15, 2014 at 4:01 AM
beautiful images, beautiful post.
by Rich Mullenbach
on March 15, 2014 at 5:24 PM
Just saw these beautiful bees on my blueberry bushes this morning. Thanks for the great photos Kathy.
by Troy bible
on March 19, 2017 at 3:06 PM
I live in northern Sacramento (ELverta Ca) I have had one of these male carpenter bees return every year for the last 4 years ... I am glad it does not sting... people say this is too far north but it can't be course he is here...
by JP Hernandez Jr.
on April 9, 2019 at 7:57 AM
We had the good fortune to see this Golden Carpenter yesterday on our peach tree .
by Jerry Miotke
on December 8, 2019 at 5:57 PM
I found one sitting on my vehicle in my driveway early one cold evening in Riverside Ca. I moved him to my patio since we were expecting rain that night and the next day. The next morning after that I moved him to a rose in my garden and waited for the sun to warm him up. Once he did he flew away, hopefully back home to his hive.
by Randall Haungs
on April 30, 2020 at 5:51 PM
Yesterday was very windy and I found one on my pool deck. It was really breathing hard from fighting the wind; I took some great pictures then he caught his breath and off he went. I have a female that nests in the bamboo on my patio every year for the past four or five years.
by flory jimenez
on June 25, 2020 at 10:04 AM
This beautiful bee is enjoying a great fruit on my property in the Costa Rican mountains, aproximately 1500 meters near Heredia.

Cheers
by Nicole Denier
on July 30, 2020 at 1:47 PM
These beautiful bees are all around my yard. They seem to be after the water. Is it normal for so many males to be flying, out and about?

One of my puppies keeps trying to catch them, so I'm relieved to hear that the males don't sting.
by Phillip R Filbrandt
on August 18, 2020 at 2:33 PM
Saw one in my flower garden in Chico - far North California
by Susan Chase
on December 8, 2020 at 1:41 PM
Love this story but why do the females have to be so ugly.........I suppose the “pretty boy” males think it’s a good thing so as not to be in competition.
by Mr. Vidrio
on April 16, 2021 at 6:20 PM
I am new to the city of Roseville but can verify a few sightings of this adorable male teddy bear bees out by our Hawthorne and Crepe Myrtle trees.
by Jaye Anne Lowe
on April 19, 2021 at 4:04 PM
Here in Rio Linda the Teddy Bears and the females love our blooming Wysteria!
by Amanda Pyland
on April 22, 2021 at 5:46 PM
Just saw one in Santa Rosa, CA two days ago! Absolutely stunning!
by Dan
on April 28, 2021 at 4:30 PM
I have one in my mandarins in Auburn
by Patricia McCollum
on May 19, 2021 at 9:19 AM
I live in New Hampshire and just saw this bee in my front yard. I have never seen an orange bee before so I came online and did a search which brought me to this page. From what I read, these bees are not supposef to be this far north. Wonder if they have migrated to this part of the country.
by Megan
on May 24, 2021 at 12:32 PM
Oh my god! I saw one flying on my porch and it gave me a heart attack! I have a phobia of bees, so this one FREAKED me out. I ditched everything and ran inside. Good to know it doesn't sting!
by Leah Faust
on May 24, 2021 at 4:27 PM
So special to have a visit today from a Teddy Bear, hanging out with a ton of females on our Cleveland Sage. Bee TV.
by Patti
on June 3, 2021 at 1:01 PM
ON June 3, 2021, Ukiah, Northern CA - I was washing windows this morning near my honeysuckle hedge and saw one of these teddy bears. I was stunned because I had never seen one in my life and I'm no spring chicken! I was able to watch it up close from inside the house for about an hour. Pretty darn amazing.
by Ashley
on June 25, 2021 at 8:15 AM
Yesterday afternoon there were 3 in our driveway: 1 male and 2 females. One female passed away and ants have had a harvest. But the other two are alive but not moving much. Why are they just sitting on the cement?
Reply by Kathy Keatley Garvey
on June 25, 2021 at 12:33 PM
If this was in the morning, they may have been warming their flight muscles. Other possibilities: diseased or injured.
by Moji
on July 21, 2021 at 1:47 AM
I saw one of these TEDDY BEAR 🧸 BEES 🐝 in my rose 🌹 GARDEN. I thought i was the luckiest to encounter this! Absolutely beautiful and i LOVE ❤️ them
by Tricia Talle
on July 23, 2021 at 5:40 PM
One of these large"teddy bear" bees was hanging upside down down from a Freesia in my garden. I thought it was asleep at first, but when it was in the same position in same place the next day I figured it was dead😐. I took a few photos.
by Richard Taylor
on January 2, 2022 at 8:54 AM
Saw a large golden bee come out of a log in my backyard followed by a jet black one, decided to look it up and saw what looks like the same bee. I'm from Trinidad and Tobago West Indies!
by Dee Miller
on January 25, 2022 at 5:20 PM
Tucson, AZ, just saw this huge golden carpenter bee trying to find entry in an old log on my garden. It was an amazing treat. So glad I found your site and was able to ID it. Thank you.
by Bill MacCorkell
on April 6, 2022 at 3:58 PM
I've seen bees in my yard in Anaheim CA for the last 40 years.
Never found a positive ID until now. They only are around on the spring. Thank for great website--CZ
by Nell Evans
on April 6, 2022 at 7:41 PM
I saw one of these in Yuba City, California, April 6, 2022. I got some great video of it as well.
by Rose
on April 8, 2022 at 2:47 AM
On 6 April 2022, a male Valley carpenter bee was seen hovering around blooming rosemary in our backyard in Davis, CA. A first! We frequently see female Valley carpenter bees at flowering sage in the front yard since the plant became established, about 10 years ago.
by Steven
on April 18, 2022 at 4:51 PM
I saw one of these in a landscaping box at Waypoint Cafe in Camarillo on 04/06/22. It landed gingerly in the middle of bunch-grass plant about 18 inches diameter and height.
More amazing, a female black bird spotted it, hopped down, walked 45 degrees around it, then *signaled* it to a male blackbird on a dining table, via this display: crouch down, fan tail feathers, fan left wind feathers directly opposite the bee, tilt head 45 degrees, then rotate head so her right eye made contact with the male, and her beak was pointed in a straight line thru the bee's location, to the male. Freeze. Neither bird showed a predatory instinct, on the contrary they were showing curiosity to give time for an instinct to trigger. Soon the bee took off and flew a straight line equally distant between the birds, who then went back to foraging for food scraps. First time seeing such a bee, and such incredible behavior in a common bird.
by ALLISON LAMM
on April 19, 2022 at 4:01 PM
One of these beauties just landed on me in Barstow, CA. Huge, golden and fuzzy. I've never seen one before - I feel so lucky!
Leave a Reply:

A Checkered Past, a Checkered Future or Just Checkered?
June 30, 2022