This month, the UC Cooperative Extension office in Marin County released a carefully researched and written report on The Changing Role of Agriculture in Point Reyes National Seashore. PRNS is unusual in the National Park system because it has contained a "pastoral zone" with working cattle ranches, dairies and other farms since its establishment in 1962.

Now, some area residents and environmentalists are questioning the existence of commercial farming in the park, particularly an oyster farm in Drakes Bay. A controversy generated by the release of the new UCCE report was covered in yesterday's Marin Independent Journal.

Reporter Rob Rogers wrote that members of several environmental groups have called the report inaccurate, and have expressed anger with what some see as the report's support for an oyster farm within the national seashore.

"We bent over backwards to make this as neutral and positive as possible," the article quoted Ellen Rilla, UCCE county director and one of the authors of the report. "We knew we would be attacked by people who had extreme opinions."

Rilla told me this morning that she wrote the report with Lisa Bush, Marin County's agricultural ombudsman, to bring some scientific information into the conversation. "That was the point of paper," Rilla said.

The 21-page report describes current county, regional and state policies, including those contained in the Marin Countywide Plan and Local Coastal Program, economic statistics, research studies, and the historic record to support the continued existence and viability of agriculture at PRNS.

Rogers wrote that Rilla and Bush realize that their suggestions may carry little weight with the National Park Service. But Marin County Supervisor Steve Kinsey believes the conclusions drawn by the university researchers could be important in determining the future of the park. 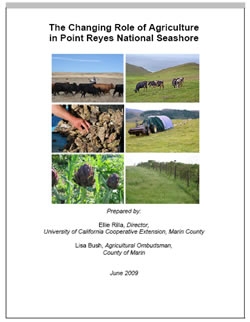