Have you seen this little critter?  Odds are pretty good that if you haven't yet then you might see it soon.  It was first found in California in 2004 in Marin.  It has been making its way through the greater Bay Area ever since.  I noticed them for the first time last summer. They would scurry around as I was working in the garden and once or twice I found one in the house.  I would do periodic checks online but never found any answers. This year after seeing them outside I consulted with the experts!  Andrew Sutherland, IPM Advisor for the UC Cooperative Extension, was able to clue me in. Here is his response:

"This species has been increasingly submitted for ID in North Bay counties. Also, it was reported in Berkeley and other East Bay locales last year. Basically, it is an outdoor species with a penchant for coming inside during drought, flooding, or to overwinter. It should be treated as a nuisance 'invader from outdoors' species, similar to Oriental cockroaches (but much smaller and cuter):

This species does not seem to be attracted to human foods and leavings, so baits developed for other species (German roaches) may not be effective. Pesticides with physical (desiccation) modes of action, such as D.E. and silica gel, will surely have some value in an IPM program, but exclusion and habitat modification should be the main thrusts...

There is currently very little info on this roach. CDFA published a New Species Alert of sorts a few years ago when it was first encountered. You can probably find that online (search CDFA and Phyllodromica trivittata)."

Leave it to an entomologist to say one cockroach is cuter than another!  However you describe it, this Mediterranean native will probably get very well established in our local climate.  Let's hope it is as cute in its behavior as some think it is in appearance! 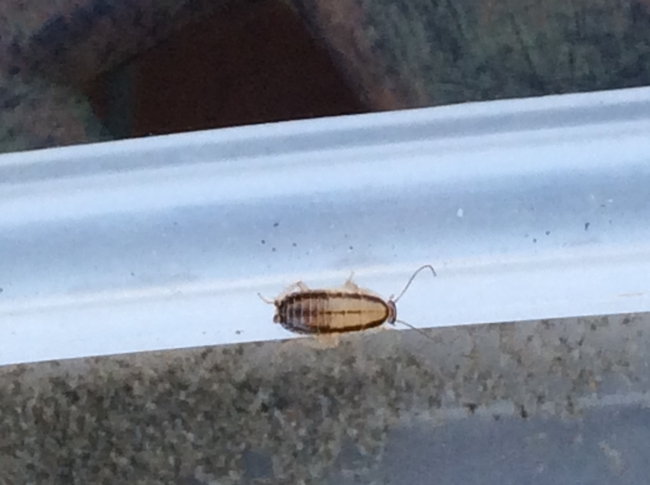 3-lined cockroach. (photo by Steve Lavell)
Comments: 14
Comments:
by Andrew Mason Sutherland
on July 7, 2014 at 1:19 PM
Thanks for this posting Teresa! I want to add that this species may not be regarded as a pest since it serves as a decomposer in the garden and landscape and is unlikely to become established within structures. At the most, it might be considered a nuisance, as stated above. In many cases, no management actions whatsoever will be necessary against this insect...
by Marian Chmieleski
on July 20, 2014 at 7:13 PM
I think this is the little guy my sister has been seeing in her house in Vacaville. Nice to know what it is! Thanks, Teresa.
by yvonne
on August 31, 2014 at 9:43 PM
I have actually found them in food in my cupboards. They seem to like sweets like cereal and marshmellows. We have been infested in our back field for a couple years now. Luckily they seem to go away in winter.
by PBN
on September 28, 2015 at 12:01 AM
They have been around my house in north San Rafael (above China Camp State Park) for more than 8 years now. FYI, recently we got a cat... and they seem to be eating his kibble, but not his wet food.
by Ben
on July 31, 2016 at 3:28 PM
This is what we've been seeing in our home in Suisun City Ca (Solano County) for the last few months; spring / summer 2016. I see them in the lawns, the bark around the shrubs pretty much anywhere around the house outside. Have seen several in the home near the back sliding door and elsewhere. They're in the garden too.
by Carlos Agurto
on September 6, 2016 at 9:20 AM
I am finding them all over contra costa county. I have been able to catch high number of them using a pit fall trap with sugar water and boric acid at the bottom of the trap.
by Kari
on September 20, 2016 at 9:46 AM
We are findings these little guys on our porches in Hercules. First time..... Living near the bay and with all the construction that is going on, wondering if that could be why or if they are just migrating all over Contra Costa now?
by SB
on September 24, 2016 at 9:20 PM
I have found 1-2 on our wood floors every August/Sept/October in 2013, 2014, and this year, but not 2015!
by Joan Weir
on July 3, 2017 at 9:01 PM
I recently found these roaches in a honeybee hive in Sonoma. I am concerned that they could create damage within the hive. Bee hives are an exceptionally moist environment, which I read these guys like. Does anyone know what damage they could be creating such as eating bee brood or ruining honey?
Any ideas on how to get rid of them?
Thanks
by EL
on October 1, 2017 at 2:25 AM
These just started turning up in my house in Sebastopol the last week or so. Glad to hear it sounds like they are nothing to worry about.
by James D Hammond
on October 7, 2018 at 5:47 PM
I have a number of them in my home in Moraga. We have chickens and bees. But I haven't seen any in the coup or the hives lately. Curiously, the first time I saw them was in my hives. I did not see any damage or other signs of hive infestation. And now that the hives are stronger the roaches seem to have left.
I am trying to seal up the house to keep them out. If that doesn't work I'll try putting down a perimeter of insecticide or orange oil or something.
by Michelle
on October 1, 2019 at 6:51 PM
Here in Brisbane Ca. In the yard and now the house. Ekkk!
by SHarvey
on July 17, 2020 at 8:15 AM
These roaches decided to come indoors! Mostly from back door but have made their way into kitchen bathroom and living room too. I find them mostly at night but they don’t hide during day. The land is dry and I’ve had these hanging out in backyard. I’ve killed about 100+ Indoors last couple weeks. Just moved to Marin County north of San Rafael and this is a new creature to me. Never experienced this before in Vallejo or Sonoma.
by Danielle
on September 8, 2021 at 9:55 PM
I found these in my moms house shortly after a relative came back from Israel trip and stayed with us. i totally thought they brought them with them from over there. Curious to find them here in Napa all of a sudden though. They’re now at my house and I’ve seen them in my backyard. I’m sure it doesn’t help that my neighbors house should be condemned. We have the big roaches inside the water meter by the curb. It really freaks me out but my husband says most water meters have roaches. We used some borax but I’m leery of using it because I have a cat and dont want her to get sick.
Leave a Reply: