Are Hops a Serious Option as a Crop in San Diego?
Published on: August 8, 2014

Farmers in our county who are using high-priced water are really thinking about “niches” in the market. They

simply must get the best prices they can if they are going to stay in business.

So, what are these “niches”?  One niche is simply converting to an organic operation.  This can usually mean higher prices, but the increase in cultural costs must be carefully considered (spraying glyphosate for weed control is a lot cheaper than hoeing, but glyphosate is not organic!).   It can be an early variety that hits the market ahead of other areas (early season, low-chill blueberries), or it can be a crop that is later than other farming districts (Gold Nugget mandarins), or it can be a crop that is desired by a local market (tropical guavas for the Hispanic population).

We might have a niche local market for hops developing right before our eyes.  According to Wikepedia, San Diego has 87 craft breweries and brewpubs, with 31 more on the drawing boards.  I have heard that our local craft beer makers might like to buy local hops.

But, can they be grown here?  Over the last 30 years I have tried to steer growers away from growing crops that have a high chilling requirement.  I've talked would-be pistachio and cherry growers from planting because they both have winter chilling requirements in excess of 900-1000 hrs below 45 F.  In the case of hops, they have a chilling requirement and we think a long daylight requirement, which they get in the Northern climates.   And I've told a lot of people that hops don't do well south of San Francisco (because that's what I read on the internet).  But some people planted hops anyway, and guess what!  They do grow here!

But they don't always bear fruit (cones).  Local growers have told me that ‘Willamette', ‘Centennial' and ‘Northern Brewer' do not produce well.  But ‘Cascade' and ‘Nugget' have been producing from young vines at the Star B Ranch in Ramona.  And other growers have been able to produce with 'Chinook', ‘Galena', ‘Perle' and ‘Tomahawk'.  Now, will they produce the quantities needed to compete in a commercial market, pay the water bills and make a profit?  This sounds like a farm advisor trial in the making!

You may wish to read a good article on growing hops that was prepared by Gordon W. Morehead and Paul Vossen with UCCE in Sonoma County    http://cesonoma.ucanr.edu/files/27166.pdf.

Growing Hops.  Hops are usually started from rhizomes (root cuttings) planted in hills about five feet apart in the early spring.  Hops grow quickly as vines on a tall trellis.  Most growers erect poles about 16-20' tall, run wires between them and drop stings down about five feet apart for the vines to climb.  Three trainings are done every fifteen days to get the vines to grow up the stings properly.

For irrigation a local grower in San Diego has reported to me that (in her second year) she used drip irrigation with a 1 gal/hr dripper/plant for 20 hrs in a set, two sets per week.  She fertilized 3 times per season with 1 lb 5-1-1 organic fertilizer and liquid fish emulsion (not sure how much) through the irrigation system.  She just completed her second year so I'm not sure what her water and fertilizer requirements will be in the third year when the vines are in full production.

Harvesting is done in August-September by cutting down the vines and either taking them to a machine that separated the cones from the leaves and vines, or by hand.  In her case she bought a harvester for $14,000 that “is a necessity if you have a lot of vines”.  Depending on the requirement of the buyer, the grower may have to dry the cones and chop them.  The grower should work out the marketing requirements well in advance of the harvest.

Are hops going to make it as a new crop in San Diego?  We don't know, but stay tuned! 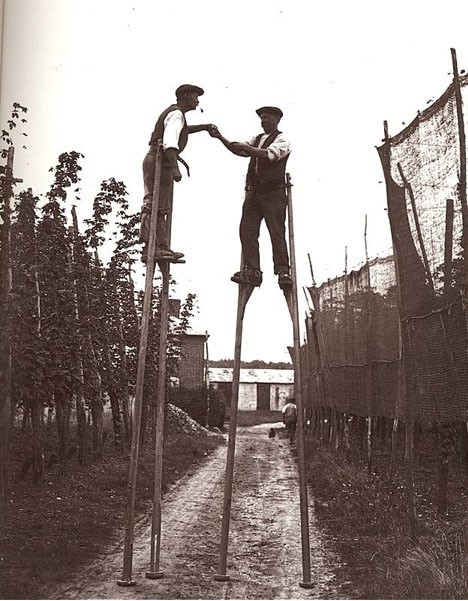