Bagrada bugs feeding on a tomato. (Photo: Jennifer Evangelista, San Luis Obispo)
California gardeners harvesting their summer produce may encounter a new pest – the bagrada bug. The native of Africa made its first California appearance in Los Angeles County six years ago and has been moving eastward and northward ever since.

“Citizen scientists have been instrumental in reporting the occurrence of bagrada in various counties and are helping map its current distribution,” said Surendra Dara, UC Cooperative Extension advisor in San Luis Obispo, Santa Barbara and Ventura counties. “This is a very serious pest. It is wiping out gardens, and is of great concern for small-scale and organic growers.”

Bagrada bugs are major pests of cruciferous vegetables, such as cabbage, kale, cauliflower, Brussels sprouts and broccoli, but they don't appear to be picky eaters. They have been known to feed on a wide variety of garden vegetables in California, including green beans, cantaloupe, corn, peppers, potatoes, tomatoes and sunflower. Even landscape plants are not immune. Bagrada bugs have been found feeding on ornamental plants in the mustard family, like sweet alyssum, stock and candytuft. Bagrada bugs congregating on sunflowers. (Photo: Larry Adcock, Arroyo Grande)
The adult bagrada bugs are about the size of watermelon seeds and have shield-shaped black backs with white and orange markings. Young bagrada bugs – with their red, black and white markings – are sometimes mistaken for ladybugs. But bagrada bugs have piercing and sucking mouthparts which cause dead spots on plant leaves and stems when they feed, and result in stunted growth, plant deformities and plant death.

Dara said scientists had hoped cold winter temperatures in northern counties of California would limit the bagrada's northward march, but that hasn't been the case so far.

“Bagrada bugs can survive the winter or cold nights by entering the top layer of the soil around crops,” he said. "They start appearing again in early spring and move from weeds to young vegetables." 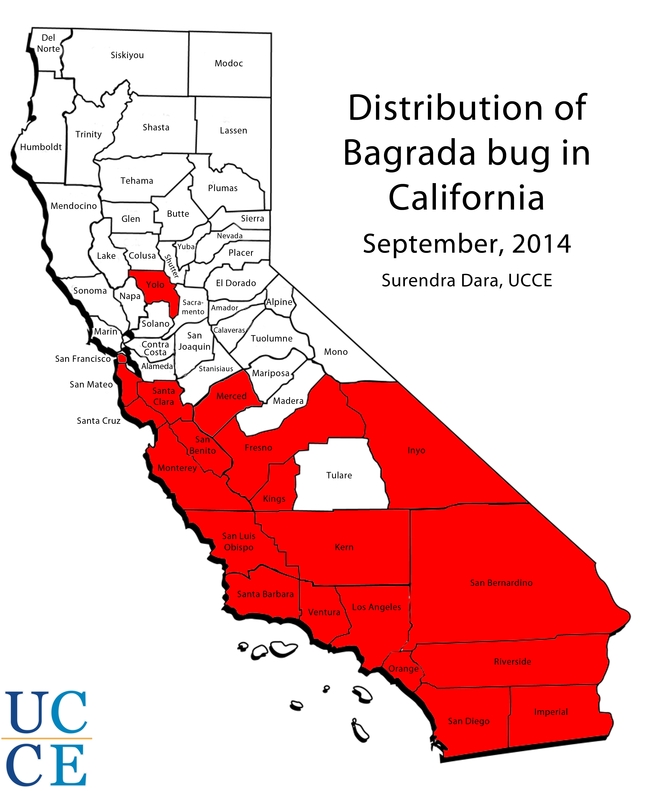 Tags: Bagrada bug (1), Surendra Dara (1)
Comments: 18
Comments:
by Marilynne Manfredi
on September 15, 2014 at 8:01 PM
I am a Merced County Master Gardener and found the Bagrada in my garden in Merced. The Ag Commisioner sent them off to the State and had them verified. Another Merced Master Gardener has them as well. I pulled all the allysum out of my garden and then bought six packs of allysum to bait them. I shook them off into soapy water or squished them on the ground. I haven't seen any for a few weeks, but I expect they might be back.
by Surendra Dara
on September 16, 2014 at 11:35 PM
Hi Marilynne,

Thanks for the information on their presence in Merced County. I will update the distribution map. I hope they do not come back.

Thank you,
Surendra
by Mary Kay Davidson
on September 18, 2014 at 3:05 PM
I found bragads bugs on my rocket salad, I pulled all the plants out and killed the ones I saw by hand.

San Dimas CA 91773
by cande friedman
on September 18, 2014 at 3:07 PM
I am a master gardner working at an LAUSD Elementary school in Venice, and we have a lot of them in our radish bed!
by Sarah Spitz
on September 18, 2014 at 4:05 PM
LA County Master Gardener, living in Santa Monica. Came home from summer vacation to find one kale plant COMPLETELY taken over by swarming hordes of bagradas. I put a plastic bag on it, cut it off at the stem and threw it away with a tight tie around the bag. Meantime they started migrating to my second kale plant. I sprayed soapy water on it massively for several days in a row, shook the plant off, sprayed with the hose, kept manually killing the bagradas as they began scampering away. Now on a daily basis, I use the hose and shake method, and finger squash them. They aren't gone but they aren't in charge any more and the plant is growing again and thriving. I realize this is impractical for anyone growing in quantity; and also mine are in containers (earth box).
by toniperez
on September 19, 2014 at 4:44 AM
This is not very good, so sad
by meredith French
on September 19, 2014 at 10:49 AM
please include a close up photo for our school garden teachers and consultants
by Keith Erickson
on September 19, 2014 at 12:06 PM
I had tens of thousands of these covering the front exterior of my house in nymph stage. Had no clue what they were and pest control didn't either. I finally caught a adult and it's off for ID. I live in Yuba City.
by Diane Pollock
on September 19, 2014 at 2:16 PM
I'm a high school Horticulture here in L.A. county. We have them in our school garden. This, combined with heat and drought is making for a very "challenging" year.
by Jayne Torres
on September 20, 2014 at 6:41 AM
I am a Master Gardener in LA County, managing a vegetable garden in The City of Bell. Bagrada bug has massively taken over arugula and to a lesser degree, Kale. I tried soapy water spray and pinching but could not keep up with them. Now I vacuum these crops on an almost daily basis with a hand held dust buster. WOW! I get hundreds every day and it is pretty quick to do. I have ordered some stink bug traps and will bait them with alyssum. I think that between the two controls, I MAY be able to grow greens this fall without a huge infestation. Good luck to everyone and thanks for your stories and comments!
by sandy hansen
on September 24, 2014 at 10:16 AM
I have them in the town of Soquel, Santa Cruz county. They have been very active all Summer. Thanks for the info as I was wondering what they were. Knew immediately they were a new pest. Now, hopefully, I can control them. But that sounds difficult. And I love my alyssums!
by Anthony Lee
on October 7, 2014 at 10:23 AM
I boil a handful of tobacco in 3 gallons of water and then I pour it into a bucket. Then you take 3 tablespoons of dish soap that does not have a harsh detergent, put 3 1/2 cups of Mouthwash and mix all of these ingredients (tobacco tea, dish soap and mouthwash). Put into a spray bottle and this kills the bugs within 30 seconds. The soap clogs their pores and the tobacco burns their exoskeleton. I sprayed for three days straight in the morning and afternoon and I reduced the population significantly. I notice also when its really humid outside, they will fly around.
by organic home gardener
on August 1, 2015 at 11:25 AM
Found in southern Alameda County on kale.
by First Generation Farmers
on October 12, 2015 at 6:49 PM
First bugs found on our pac choi, and rapini broccoli... East Contra Costa County, Brentwood.
by Mikey
on July 7, 2016 at 7:42 PM
Found these on discarded fruit 08/16/2014 at 2025 N Bush St, Santa Ana, CA 92706. Have high resolution photos.
by L Robert H
on August 31, 2016 at 4:34 PM
Reporting these Burbank CA home garden on arugula. Interstingly, they are not eating the young 2" plants, maybe not enough stem for them to suck?
by Jana Keane
on September 5, 2016 at 11:02 PM
I'm fairly certain I am seeing these on my tomatoes in Des Moines, WA. :(
by Terry Brown
on August 23, 2018 at 3:53 PM
I have them here in Modesto....they have gotten into my tomatoes and are multiplying by the hundreds. I see they were brought into California 6 years ago.....that explains why they have just recently shown up. This is not good......
Leave a Reply: