For years, uninformed folks have declared that honey is "bee vomit."

These things are inequitably false.

2. Einstein said that "if the bee disappeared off the surface of the globe, then man would only have four years of life left."

Yet people gleefully insist that honey is bee vomit. Why do they say that? Who knows? To make people stop eating it? To deter them from consuming honey as they eagerly spread it on their waffles, toast or English muffin? To make fun of people who love honey, a wonderful treat that's sometimes called "the soul of a field of flowers?" Sensational or junk "news," the kind that tabloids print without checking?

Extension apiculturist (retired) Eric Mussen of the UC Davis Department of Entomology and Nematology, who retired this June after 38 years of service, says: "I make the distinction between honey bee regurgitation and mammalian vomit based on the fact that the nectar and honey being processed by the bees never have direct contact with food being processed, or expected to be processed, 'digestively' as is the food in a mammalian stomach."

"Although many sources refer to the honey bee crop as the 'honey stomach,' it is not a place where consumed foods are being digested in honey bees."

In their book, Honey Bee Biology and Beekeeping, authors Dewey Caron and Lawrence John "Larry" Connor define the honey stomach as a a "honey sac."

It's "an enlargement of the posterior end of the esophagus in the bee abdomen in which the bee carries the nectar from flower to hive."

Bee vomit? No way. It's where nectar is stored. It's not a stomach as we know it. 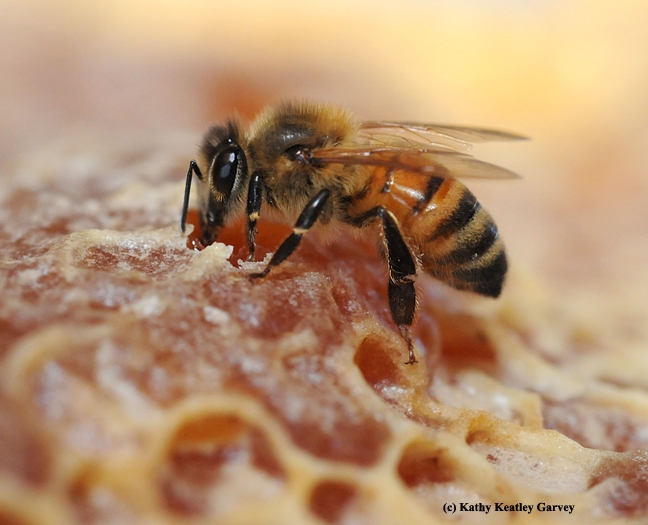 Honey is not bee vomit. (Photo by Kathy Keatley Garvey)
Tags: bee vomit (3), honey (39), honey sac (1), honey stomach (1)
Comments: 37
Comments:
by Jeannette E. Warnert
on October 7, 2014 at 9:47 AM
Glad to know it's not "vomit," but even though, TMI.
by Alicia
on April 14, 2016 at 3:02 PM
If it goes down their little bee throats and comes back up, it is vomit. One man's opinion does not change the fact that bees regurgitate nectar. I don't care where inside them it comes from. Vomit is vomit.
by robert andrew
on May 24, 2016 at 10:09 AM
What I find fascinating is how does this nectar get funneled to the correct stomach ? But I sort of also agree with Alicia, vomit is vomit, and regurg is regurg.
by Shane
on June 2, 2016 at 1:14 AM
This is so stupid, it is bee regurgitate, aka vomit, not that hard to understand
by Sam Albright
on June 8, 2016 at 5:49 AM
Meriam-Webster defines Vomit. 1: an act or instance of disgorging the contents of the stomach through the mouth; also : the disgorged matter.
Since the nectar does not come from the bees stomach. it is not "Vomit" as defined above.
by Chris Strobel
on June 11, 2016 at 12:23 AM
@ Sam Albright, "also : the disgorged matter."

Disgorge: cause to pour out.

"the combine disgorged a steady stream of grain"

or in this case

"the bee disgorged the nectar and bee-gut-protein cocktail into the honeycomb via its mouth."

So, allowing that it is disgorged by the bee and is in fact physical matter, honey by Mr. Websters definition is vomit.

@Dana Madison, it is an animal and vegetable product at the same time!
by Juan Jimenez
on December 26, 2017 at 1:44 AM
So it's bee diarrhea. Got it.
by jackobyte
on September 3, 2018 at 1:37 AM
Humans parasitize many creatures, just be happy it's not the honeycomb with the pupae still inside (mind you that might be the perfect super food i.e. energy plus protein). The maw of humanity is ravenous and as someone above wrote, they wouldn't care if it was excrement as long as it tasted great (sweet?)
by D
on December 31, 2018 at 12:06 PM
Is it bee phlegm?
by M M
on August 14, 2019 at 8:18 AM
It's a shame that commentators can't joke about something that most of us take so trivial "food Sources." Technically. if it is digested and regurgitated it's vomited as anyone knows who's had the dry heaves. On a more serious note, I am a beekeeper and attending a picnic for beekeepers in Granite Falls,NC. All are invited tomorrow. I encourage those of you who par take of honey to research where it comes from and to investigate why we are losing the honey bee.
by Brad Raspet
on July 1, 2020 at 8:49 AM
Most miss the point... honey is bee spit.
by Bee Honest
on August 16, 2020 at 2:13 PM
Digestion starts in the mouth, but if you chew something and spit it out, is that vomit? No. Because it wasn't half-digested and didn't come out of your stomach. If you choke on your food, someone gives you the Heimlich maneuver and you spit the food out, is that vomit? No. Even though you chewed it up AND swallowed it, it was never in your stomach. Just like the nectar in a bee's esophagus was never in its stomach. How hard is that to understand? Bee Honest.
Leave a Reply:

'A Water Leak' That Turned Into a Surprise Birthday Party
February 1, 2023