A souper bowl of chili Get a winning recipe for chili, just in time for the Super Bowl.
If it's Super Bowl time (and it is on Sunday, Feb. 1, when the Seattle Seahawks and the New England Patriots clash for the National Football League championship), it's also time for a "Souper Bowl."

A souper bowl of chili, that is.

Question is, which recipe to prepare? Well, the Solano County 4-H Youth Development Program to the rescue.

Every year the Solano County 4-H Project Skills Day includes a Solano County 4-H Chili Cookoff. Teams sign up, prepare their chili in advance, and transport it in a crockpot or slow cooker to the venue (this year it was the C. A. Jacobs Middle School in Dixon). They field questions from the judges, who sample it, score it and select the winning team.

This year's winner was a pepper-loving  team that used four different kinds of peppers and the secret ingredient — love.

The group, all members of the Dixon Ridge 4-H Club and enrolled in the countywide Outdoor Cooking Project, chose Pasilla, Serrano, Anaheim and green bell peppers and also displayed "specimens" in front of their crockpot.

Team members Quincy and Fallon Decious and Shaley and Braydon Gish said they plan to make the chili for their families on Super Bowl Sunday. “It's really good,” they all agreed.

While preparing the peppers, they said they wore “doctor gloves” to prevent the potent pepper oils from reaching their skin.

The judges praised the flavor and texture, the display and their enthusiasm. Judges were Cutter Hicks, reporter with the Dixon Tribune; Jim  Nessen of Dixon, who works for a data company in Sacramento, and Kathy Keatley Garvey, a University of California, Davis employee and a longtime 4-H volunteer and food columnist.

“Public speaking has been a cornerstone of the 4-H Youth Development Program,” she said. “Public speaking skills are ranked No. 1 among the skill sets of professionals.” Youths participating in the Project Skills Day “develop many life skills, including public speaking, organizing ideas, and creating and using graphics, resulting in increased self-esteem and confidence.”

Four teams competed in the annual cookoff. Others were:

The Los Chileros used both pork and beef and fire-roasted peppers. Another addition was corn, for a southwestern-style chili.

The Chili Dogs' key ingredients were hot dogs and carrots. Each wore a t-shirt with an image and name of their family dog. They made biscuit-shaped rolls to accompany their chili.

In a large stock pot, brown pork in the olive oil. Add the ground beef and continue cooking over high heat until beef is browned, about 30 minutes. Add the water and seasons. Cook an additional 30 minutes. Add tomatoes and beans. Turn down beef and simmer for 30 minutes. While mixture is simmering, coarsely chop onions and peppers and finely copped garlic. Add these to the pot and continue cooking until pork is tender, about another 30 to 45 minutes. Check flavor and add seasonings to taste. If needed, thicken chili with cornstarch.

Here's another recipe to try that the judges favored for the flavor:

The ingredients "can be adjusted to suit your taste," they said.

Brown meat in a skillet and then put in crock pot. Cut vegetables and add to crock pot. Add spices and canned tomatoes and paste. Cook on high for six hours. Add the corn and beans the last 30 to 45 minutes. 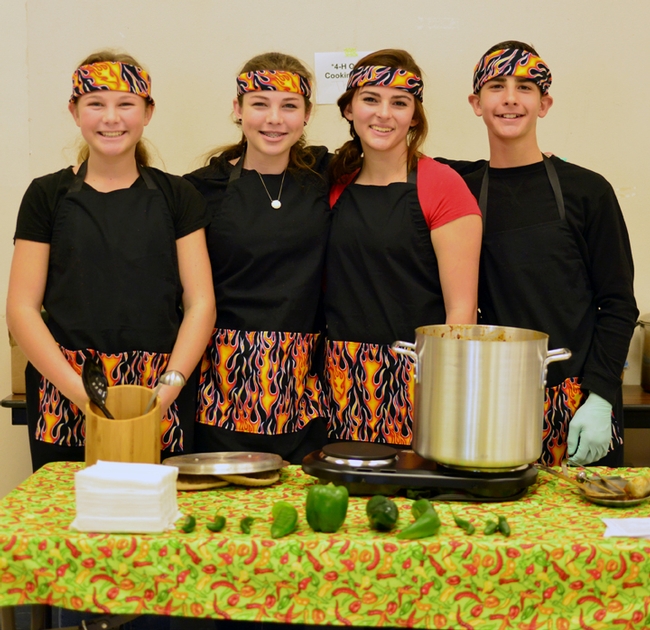 The winning chili team at the 2015 Solano County 4-H Chili Cookoff is this group of Dixon Ridge 4-H Club members who are enrolled in the countywide Outdoor Cooking Project. From left are Quincy Decious, Fallon Decious, Shayley Gish and Braydon Gish. (Photo by Kathy Keatley Garvey) 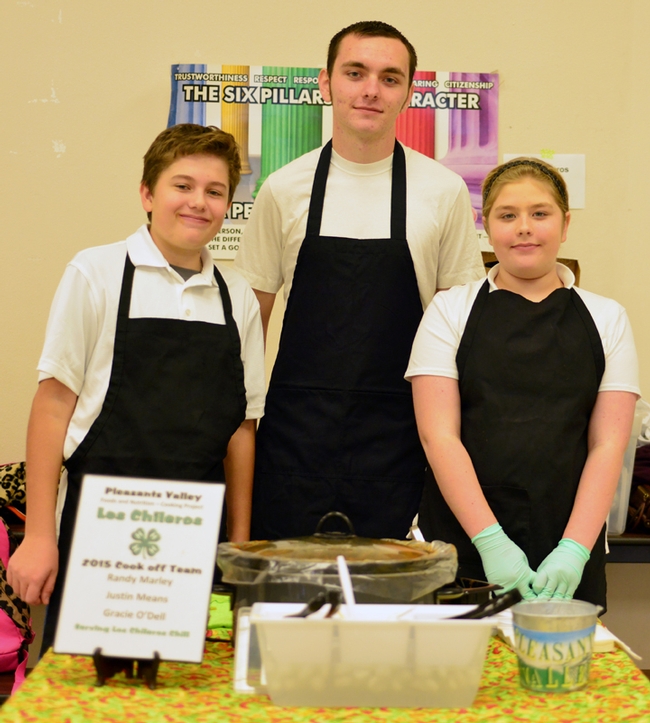