One quarantine lifted, another imposed
Published on: August 26, 2009

The northward movement of the psyllid may raise fears of the state's citrus growers, but there is also some good news about the effectiveness of state-sponsored pest eradication programs. CDFA announced in another news release yesterday that a Mediterranean fruit fly infestation San Diego's Spring Valley has been eradicated.

To eradicate the pest, ag officials released nearly 3 million sterile male Medflies over an 11.2 square-mile zone at the core of the quarantine area. Fertile female flies mate with the sterile males but produce no offspring, eventually eradicating the pest.

Medflies can infest over 260 types of fruits and vegetables, threatening California’s crops and exports as well as urban and suburban landscaping and gardens.

CDFA said the new ACP quarantine in Orange County will restrict movement of plant material at wholesale and retail nurseries within five miles of the find site. In addition, the agency is planning a treatment program and monitoring the area to detect additional psyllids. 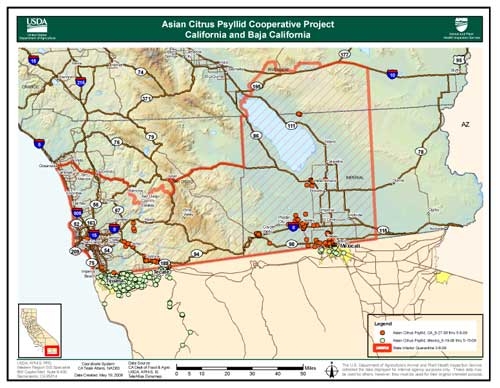