Stephanie Hsia
This is a story about honey bees, almonds and a Harvard gradate student who is passionate about pollinators.

Stephanie Hsia, a master of landscape architecture candidate at the Harvard Graduate School of Design (GSD), has just created a marvelous 46-page digital story, http://almondandbee.com, which she plans to turn into a book.  It's about the spatial relationship between the almond tree and the honey bee over time.

"I was inspired to create socially engaging and ecologicalperformative places and hope to bring my passion for enhancing natural systems to the urban environment," said Stephanie, who holds a master in environmental science and management from UC Santa Barbara's Bren School of Environmental Science and Management.  Before enrolling at Harvard, she worked in  environmental consulting and at urban ecology and watershed non-profits.

Her passion for pollinators extends to keeping bees on the rooftop of her school building.

A little bit more about Stephanie: Her interest in entomology first peaked when she was an undergraduate student. "During one of my summers, I had the opportunity to work at a lab studying wasp behavior and butterfly learning. I would sit in large cages with wasps, and note how they would react to different stimuli (e.g., caterpillars in leaf shelters, leaf shelters with frass, etc). We also ran experiments watching butterflies forage to see if they could learn to prefer a different flower color based on nectar reward."

"As a designer, I developed an interest in pollination during my second semester at the Harvard Graduate School of Design--I used the idea of pollination to attract people and pollinators to a park redesign, and developed a planting palette and a promenade that would do so."

Stephanie  became interested in almonds in early 2014 while developing a grant application. The grant funded her travel through California almond orchards in May 2014.  She spent a week in "almond country." She met with experts at UC Berkeley and UC Davis, the Almond Board, the Blue Diamond Cooperative, beekeepers, almond farmers and almond farmers who also kept bees in the Sacramento and San Joaquin Valleys.

One of the people she met was pollination ecologist Neal Williams, associate professor, UC Davis Department of Entomology and Nematology. He filled her on his research and offered tips on people to meet and places to see.

"I also took a helicopter ride in Fresno County to shoot aerial images of the almond orchards," Stephanie said. "I'm scared of heights, so I was a bit worried about this part of the trip, but it was really worth it, and not quite so scary when you experience the ride through the lens of a camera!"

"The shape of the project developed during my fall 2014 semester. I thought an illustrated story would allow me to combine my photographs, maps, and drawings, with found historical images in an engaging and accessible form.  I would like the story to reach a wide audience, so developing a visually interesting project was very important.  We've built this expansive and what is essentially a massive bee infrastructure that is very surprising. The story is about how that came to be, but it's also an argument for holistic thinking in agriculture that could be both cultural and economically significant."

Stephanie said she started learning  about beekeeping in fall 2013, "but really started to keep bees when I took over as the head of the GSD bees group at the school in spring 2014." The small group of students has kept bees on the rooftop "for a few years now," she notes. "It was a steep learning curve, but so rewarding, and I'm keeping my fingers cross that the bees make it through this tough winter!"

When you access the first page of http://almondandbee.com, two key sentences coax you to read more: "The almond and the bee. The spatial relationship of the orchard, bee, and dwelling through time."

Almonds and bees need each other, she points out. Almonds are the first California crop to bloom "when honey bee colonies numbers are at their lowest." Today California's has more than 900,000 acres. Each acre requires two bee colonies for pollination. And every year some 1.6 million colonies, or approximately 60 percent of the nation's colonies, are trucked to California.

"California almonds are exported to more than 80 countries, making it the most valuable and profitable specialty agricultural export in the U.S.," she writes.

"The relationship between almond growers and migratory beekeepers are in many ways analogous to that of the fruit tree and the bee—one is sedentary and one is mobile, but both depend on one another," Stephanie writes.

In her digital story, she traces the modern history of the honey bee, touches on traditional beekeeping methods, mentions the invention of the Langsroth hive in 1851, and takes a peek at the future of beekeeping and almond orchards.

It's an informative, creative and well-designed story. 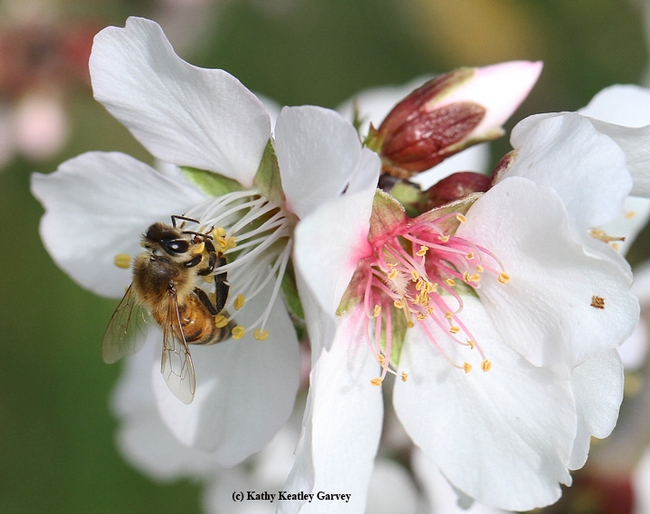