Another attentive dog averts disaster
Published on: August 28, 2009
A FedEx package filled with curry leaves and guavas arrived in Sacramento Wednesday infested with 100 Asian citrus psyllids, the Los Angeles Times reported today. In a scenario eerily similar to one that took place in Fresno two weeks ago, a trained dog alerted authorities to the package, the pests were trapped, analyzed at a lab and determined to be free of the bacteria that causes the citrus disease Huanglongbing (HLB).

The package destined for Fresno was mailed from India; the package in Sacramento came from Houston, Texas.

"We know that this has been going on but it is just now that we are getting a feeling for how bad it is as we get more federally funded dog teams out there," the article quoted Beth Grafton-Cardwell, a UC Riverside citrus entomologist based at the UC Lindcove Research and Extension Center in Exeter.

UC scientists are working with CDFA, USDA and the citrus industry to prevent establishment of Asian citrus psyllid in California. But the effort has been met with several recent setbacks. Their greatest fear is for the incurable HLB disease that the psyllid transmits.

Grafton-Cardwell believes the pests' eventual spread through the state's citrus regions is inevitable.

"It's only a matter of time before the huanglongbing disease finds its way to California from Mexico or elsewhere," Grafton-Cardwell told LA Times reporter Jerry Hirsch. 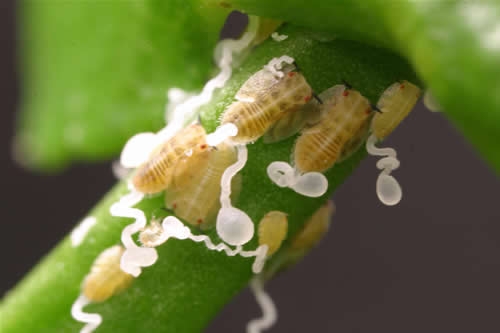