I have an ongoing study with an alternative fumigant (not chloropicrin) compared to an unfumigated control up against the methyl bromide/chloropicrin standard.   There's some other stuff in here too, that will be discussed at a later date.

The collaborating grower observed a few weeks ago that plants in the unfumigated control and alternative fumigant were going yellow, in particular the older leaves.  That this was not occurring to any sizable degree in the methyl bromide standard was notable.

As many of you my readers know, I really frown upon the identification of leaf yellowing as being caused by this or that deficiency in the absence of any sort of laboratory analysis, so I took two leaf samples from each of the three treatments and submitted them to Perry Labs here in town.

Remembering that two samples per treatment aren't going to give us a what can be called a truly scientific conclusion, these results do at least give us a look at what is going on.  First of all, the yellowing probably isn't from nitrogen, which is showing up very much at sufficiency in all treatments.  Ditto Ca, Mg and the micros (note that original sample Fe numbers are all over the place); Na is low.

Circling back, we do see that P is lower in both unfumigated and the alternative than the methyl bromide standard, plus the symptoms show up in the older leaves, which checks out for a very mobile element like P.  K is just under that recommended from the revised nutrient guidelines from the work I did with Tim Hartz at UC Davis.  Additionally, P and K, which come into contact with roots via diffusion in the soil solution (meaning the roots need to grow to the minerals since they are both pretty immobile in the soil) as opposed to mass flow as is the case with nitrate (meaning the nutrient moves to the root since it is mobile), could have their uptake rates reduced by a lessened abundance of roots and root hairs.

The question is then if what we are seeing here is that the lower root growth stemming from less than accustomed fumigation efficacy is also a cause of an apparent deficiency in phosphorous and maybe potassium. 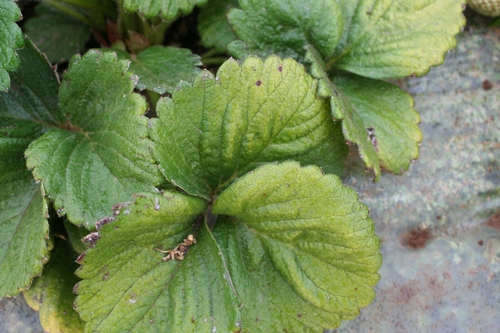 Yellowing of leaves in the alternative fumigant. 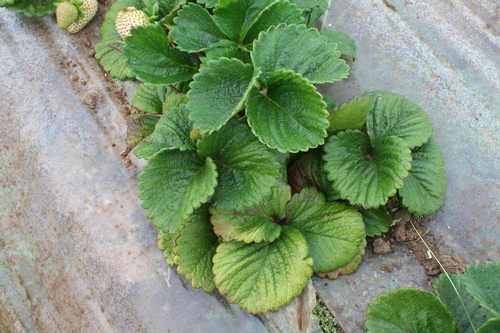 Same thing, yellowing of leaves in the unfumigated control. 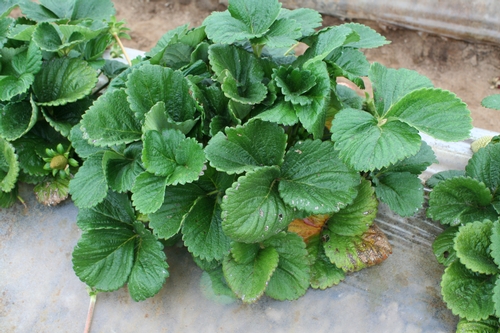 Plants in the methyl bromide/chloropicrin standard; green, lush, productive.
Tags: fumigation (3), phosphorous (8), strawberry (74)
Comments: 2
Comments:
by laurence london (Lorenzo)
on April 25, 2015 at 4:46 AM
Mark allow your humble servant to give my penny opinion. I just finished looking at my tissue analysis of leaves with similar expression and I have from 8000 to 11000 ppm of Cl and Mg. Is the Cl in fumigated block attaching to what ever methane that is being produced by organic matter degradation in the soil? um um um. All of my tissue samples are very high in Cl (organic and TO blocks) NaCl burn starting to surface more prominently.
by Mark Bolda
on April 25, 2015 at 8:16 AM
Open to all opinions Lorenzo. Mg in these samples is normal, kicking myself that I didn't measure chloride-I'll let Cliff know the next time. Soil is pretty sandy though, so the OM is not going to be that high.
The real point of this post, when all is said and done, is that the the transition from methyl bromide is going to be fraught with questions like these, be it what I suggest a compromised root capacity leading to insufficiencies in macronutrients other than N or what you suggest on the chloride and other salts. It's a whole new world. Thanks again for commenting!
Leave a Reply: