Dry Root Rot is a pretty fantastic disease symptom that is usually seen in lemon, but can be seen in orange, as well.

I have seen a lot of dry root rot over the years.  It usually is something that damages or weakens the root system which allows a Fusarium species to colonize the rootstock.  It is very common in older lemon groves that froze at some point in their past. Also common in groves that suffered a lot of gopher damage or where the wraps got too hot in the sun burning the bark and cambium.   I have also seen it in cases of fertilizer or  other soil-applied chemical burn.    I have no doubt that graft incompatibility could do it too.

As you can see from the attached picture there is a weird callus formation and symptoms of incompatibility at the graft union which I think is the primary cause of decline. We didn't observe any discoloration in the scion, however rootstock was completely discolored where we isolated Fusarium solani the causal fungus of Dry Root Rot. Dry root rot caused by either Fusarium solani and/or Fusarium spp. When there is a disconnection at the graft union, the phloem can not transfer enough carbohydrate to  the rootstock to feed feeder roots. Fusarium fungal species are present in the soil and they can attack and easily colonize on starch depleted roots and cause DRR.

We still don't know what is causing the graft incompatibility on these plants. That needs to be investigated.

It's still not clear how and why citrus becomes affected. 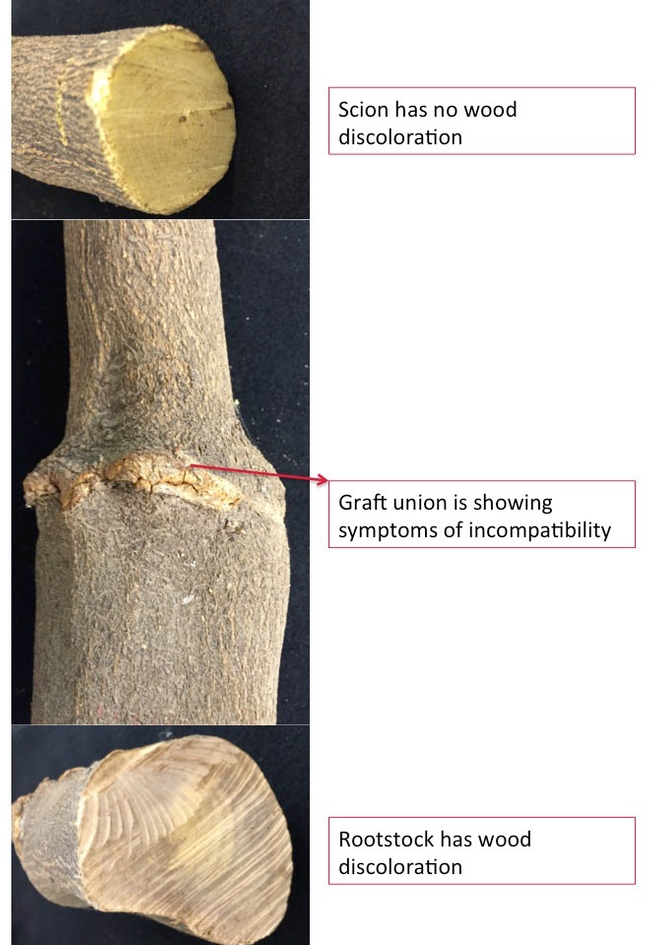