Rachael Long stands under the Yolo Causeway with bats hanging overhead.
Bats prey on insects and can consume as much as their body weight in insects per night. Rachael Long, UC ANR Cooperative Extension farm advisor, discussed how bats protect walnut orchards with Capital Public Radio show Insight  host Beth Ruyak. Long's research has found that each bat provides about $10 worth of pest control savings for walnut growers.

Long, who works on field crops and pest control in Yolo, Sacramento and Solano counties, noted there are 250,000 bats living under the Yolo Causeway alone that could be employed for pest control.

When asked how she knows that the nocturnal animals are eating the damaging pests, Long explained that she examines the guano to identify the insects they've eaten. "Bats have very shiny poop," she said, because their fecal matter is full of insect exoskeletons.

Long, who has studied the design elements of bat houses, brought a sample of a bat house to the studio. She said the box should be placed in an area that gets afternoon shade and at least 10 feet off the ground to protect the bats from cats and dogs.

Long also talked about the Black Rock Desert trilogy, a series of educational children's books about the adventures of a boy and a pallid bat that she has authored.

For more information about Long's bat project, see her blog post Bats in the belfry? No, bats in walnut orchards.

Long will be discussing her bat research with the Capital Science Communicators group tonight at G Street Wunderbar in Davis. She will bring specimens of common bat species for people to see and touch. The talk is part of UC Davis' Science Café series and is a free event that's open to the public. 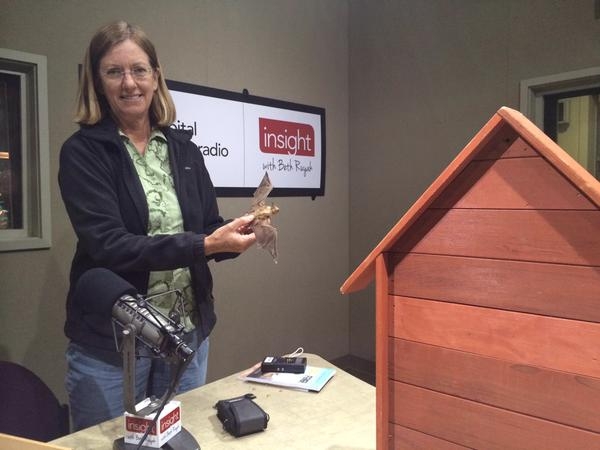 Rachael Long shows a bat and bat box.
Tags: bats (3), Capital Public Radio (1), Rachael Long (10)
Comments: 1
Comments:
by Charles Clayton
on August 10, 2015 at 4:25 AM
It is great to read about bats that they can be used for pest control and save lots of pennies.
Leave a Reply: