Oh, oh is there going to be a wet fall and winter? If it comes and washes the accumulated salts of the last four years out of the root zones of citrus and avocado, that's a good thing. But what happens if there is a little too much of the good stuff? In the winter of 2005, Venture got over 40” of rain, which is 200% of what is normal. The last time big rains occurred prior to that was in the winter of 1997-98. That year the rains were evenly spaced on almost a weekly basis through the winter and into the late spring and over 50" fell. That year we had major problems with both citrus and avocados collapsing from asphyxiation. The same occurred in 2005, but not so pronounced. This winter could also see some collapse.

Asphyxiation is a physiological problem that may affect certain branches, whole limbs or the entire tree. Leaves wilt and may fall, the fruit withers and drops and the branches die back to a greater or lesser extent. The condition develops so rapidly that it may be regarded as a form of collapse. Usually, the larger stems and branches remain alive, and after a time, vigorous new growth is put out so that the tree tends to recover.

Asphyxiation is related to the air and water conditions of the soil. The trouble appears mainly in fine-textured or shallow soils with impervious sub-soils. In 1997-98, this even occurred on slopes with normally good drainage because the rains were so frequent. When such soils are over-irrigated or wetted by rains, the water displaces the soil oxygen. The smaller roots die when deprived of oxygen. When the stress of water shortage develops, the impaired roots are unable to supply water to the leaves rapidly enough and the tree collapses. The condition is accentuated when rainy weather is followed by winds or warm conditions.

Canopy treatment in less severe instances consists of cutting back the dead branches to live wood. If leaf drop has been excessive, the tree should be whitewashed to prevent sunburn. Fruit, if mature should be harvested as soon as possible to prevent loss. In the case of young trees, less than two years of age, recovery sometimes does not occur, and replanting should be considered if vigorous regrowth does not occur by July.

Asphyxiation can be reduced by proper planting and grading. If an impervious layer is identified, it should be ripped prior to planting. The field should be graded so that water has somewhere to run off the field during high rainfall years. Heavier soils might require planting on berms or mounds so that the crown roots have a better chance of being aerated.

Post-plant, if an impervious layer can be identified and is shallow enough to break through, ripping alongside the tree or drilling 4-6 inch post holes at the corners of the tree can improve drainage. It is important that the ripper blade or auger gets below the impervious layer for this technique to be effective.

We don't know what the future holds.  Hopefully rain that does some good without too much harm. 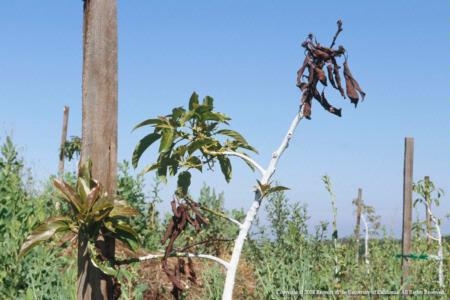