A plot of Southeast Asian medicinal and culinary herbs at the UC Kearney Research and Extension Center made an appearance in a Fresno Bee food story published yesterday.

The article centered on "Cooking from the Heart: The Hmong Kitchen in America," a cookbook for Americans who wish to try the exotic cuisine introduced by Hmong immigrants. A large population of Hmong settled in the San Joaquin Valley after the Vietnam War. The Hmong collaborated with the CIA during the conflict and were promised protection in the event of a loss. They were ultimately relocated to enclaves in California, Minnesota and other areas.

Writer Joan Obra says some of the recipes in the new cookbook evolved from Southeast Asian traditions and others as Hmong families assimilated to American life.

The plot at Kearney, she noted, is the collaborative effort of UC Small Farm Program advisor Richard Molinar, based in Fresno, and his Hmong-descended research assistant Michael Yang.

Obra says the Hmong garden, which she recently toured, may be the only such research collection in the United States.

In fact, "(The plants) are not really common on California farms," the article quotes Molinar. 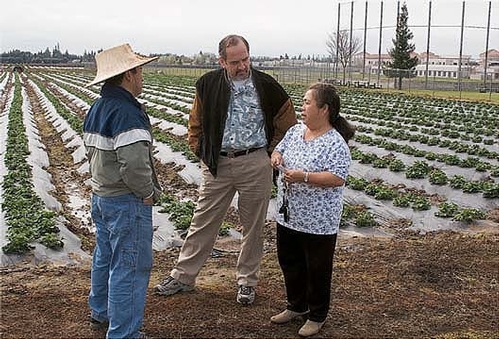