From the UCANR NEWS BLOG

Coyotes are much more abundant now in urban areas of Southern California than they have ever been before, reported the Long Beach Business Journal. For the story, the Journal interviewed UC Agriculture and Natural Resources emeritus Cooperative Extension specialist Bob Timm in their Long Beach offices.

Timm, who served as director of the UC Hopland Research and Extension Center in Mendocino County, has 27 years of experience dealing with coyote management.

Timm said coyotes can find ample food in suburban and urban areas by scrounging through garbage and compost piles, eating pet food and even small dogs and cats. Water is available in ponds, birdbaths and pools. Some people intentionally feed coyotes.

“The difficulty is there is so little research on coyotes in suburban and urban areas because it is so hard to do,” Timm said.

Research conducted in the early 2000s by Timm and a Cal Poly Pomona professors found that coyotes habituate in urban areas in a predictable manner than can be observed along the following seven steps:

“One of those steps is they start attacking and killing pets,” Timm said. “When they start doing that in the daytime, then it becomes very problematic and some of those coyotes are eventually going to become aggressive toward people."

According to Niamh Quinn, the UC ANR Cooperative Extension area vertebrate pest advisor, based at the UC ANR South Coast Research and Extension Center, there were six recorded coyote bites on humans in Irvine this year.

Read more about Coyotes and their management in Pest Notes: Coyote. 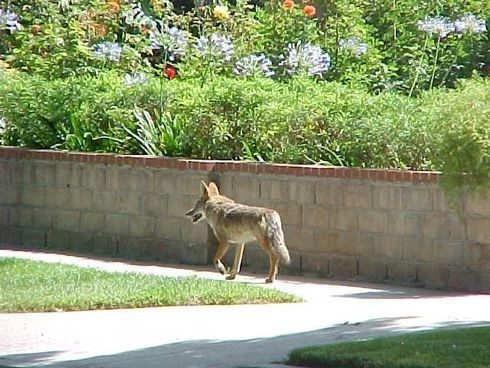