For instance, the roads were a complete mess and in places undriveable, even though our driver was quite skilled and we got around without mishap. We did, however, spend several harrowing hours traveling on the notorious ‘chicken' bus – a van for 10 with about 20 people in it including a mountain of stuff tied to the roof, as in chicken coups, tires, and luggage and whatever else could be held down by ropes. It was stifling hot. But it got us where we wanted to go after several hours of fascinating driving through gorgeous mountains and villages, by the end of which we were mainly concentrating on our very full bladders. At one point we witnessed a bus having just gone off a mountainside with many people trying to figure out how to get to the injured. No AAA to call. Was all the road experience just par for life in Madagascar, or were the local people also on edge about how to survive road travel?

On the other side, the mountain driving was quite beautiful. Long expanses of forest, rice fields, no traffic, and small villages along the way. So here was the wonderful side of being in a relatively undeveloped country. In general there were hardly any cars. The tourist spots had some, the cities had a fair share, but the village areas were one main street with vendors lining both sides of the road, and just about everyone on foot. I had the impression that the overall economy was poor. This was confirmed when we talked with people who said that the government couldn't be relied on to provide road repair or much education or much in the way of civic projects. Foreign money had dried up after donors realized that the money was going into bureaucrats' pockets. So village life was subsistence farms. The place was in many ways out of another century.

One of the other rather eerie experiences happened when driving through the countryside. There were fires. Lots of them. Apparently, and we couldn't verify this any more than hearing it from more than one person, that setting fires was a form of social protest against the government for one policy or another. It is also quite possible that the fires were set (also) to foster the growth of new grass. Some of the fires were quite large and looked like they stretched over many acres – especially near the national parks. The parks were apparently a flash point since the government was wanting to move people to protect the parks – flora and fauna. The lemurs lived there and were a joy to see and track. The national parks and the lemurs are a big tourist draw and there was good reason to protect them. We couldn't tell how the government was responding to protest by fire.

We never felt in danger – perhaps foolishly – and went freely where we wanted. We didn't have much time to really take advantage of this privilege, but it was nice to think it was available.

The island-country had the natural biological advantage of isolation. The natural surroundings had some rather unique features – one of which were the lemurs, many species. The flora were also at moments quite extraordinary. The baobabs (Adansonia digitata) were quite numerous in some areas and they are so unusual to look at that they never ceased to attract our attention. They have edible fruit and the bark is used for paper, rope and cloth. Because the canopy is so distinct with no branches coming out of the trunk at a lower level, the tree has the appearance of being upside-down, as if the roots are on top. The smaller varieties grow in the company of other more ordinary looking trees. Some species can apparently grow quite tall, as in the attached picture, and quite old – maybe 950 years.

I believe that 6 of the nine varieties live in Madagascar; all different sized and somewhat different shapes. Most are amongst other plants, but this so-called avenue of the baobobs (in the picture) is almost mystical, especially at sunset, in its other-worldly colors and size. They are a draw for local people as well as foreign tourists and there is a village community nearby the ‘'sacred' street, with goats and other domestic animals grazing in nearby pools. For me, this was as moving as temples in India.

Another spectacular plant, ravenala (Ravenala madagascazriensis)or “travellers palm” is the national symbol of the country. It is very striking; I hope the picture conveys some of this. Very tall and fan-like. There is some controversy about where it belongs botanically, but some put it in the plant family Streliziaceae. It is not really a palm but the fan is striking and the plant is quite wide-spread. It is called ‘travellers palm' because apparently the branches hold water which desperate traveller can access. But this is not advisable, better take bottled water.

I have many other impressions which I could share, but I have to say, that the flora and fauna seem undeniably real, different and special. The various events surrounding the people I feel less confident about. I'll just have to go back and spend more time there, so I can verify or disprove my observations. 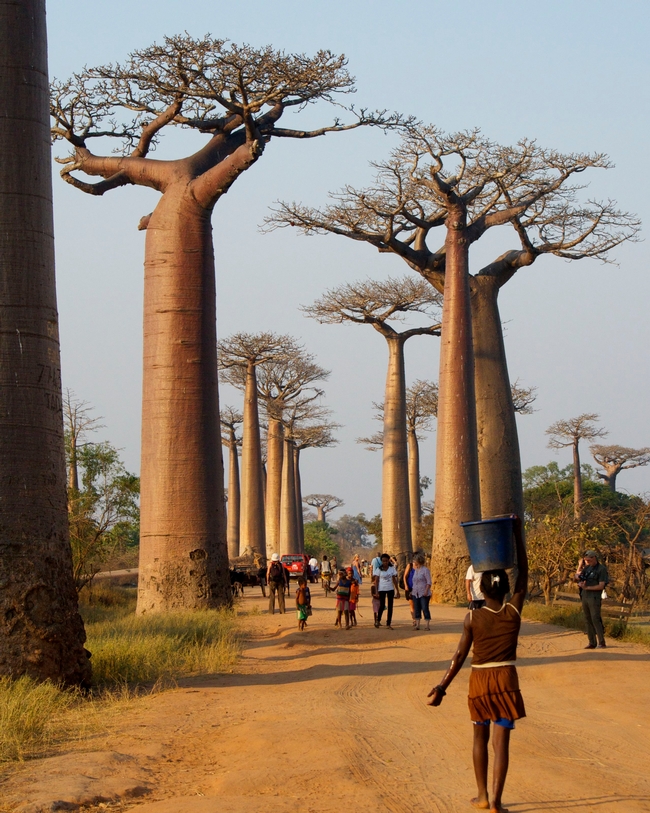 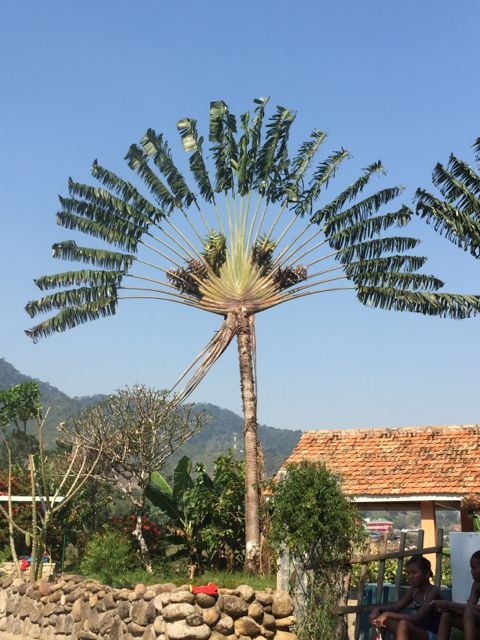 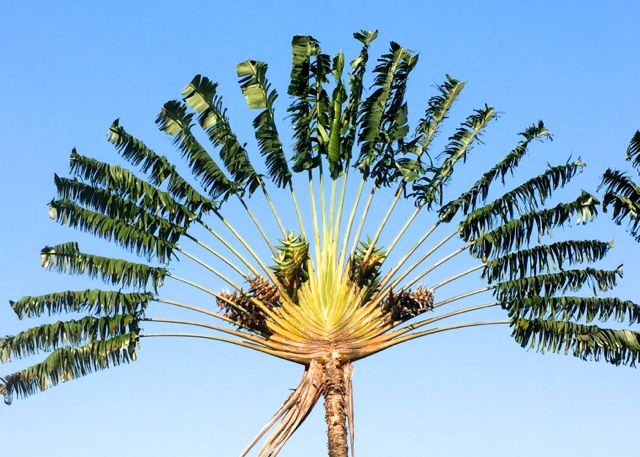 Travellers palm closeup
Comments: 3
Comments:
by Andrea
on December 12, 2015 at 8:33 AM
Thank you for a fascinating glimpse of Madagascar.
by Julie Majewski
on December 12, 2015 at 9:03 AM
That is so interesting!! The photos are great. You must have had a wonderful time.
by kated
on February 20, 2020 at 1:24 AM
Hello! I just would like to give a huge thumb up for the great info you have here on this post. I will be coming back to your blog for more soon.
Leave a Reply: