The idea was dropped after grower Andy Wilson raised objections to the plan saying the reclaimed water contains trace amounts of boron and sodium, which could accumulate in the soil and eventually kill trees. Instead, the city will sponsor a 10- to 15-year UC Riverside study to learn how boron affects trees and fruit.

According to the article, written by David Danelski, UCR soil chemistry professor Christopher Amrhein said Wilson had good reason to be concerned about the city's plan divert fresh water from the Gage and Riverside canals and replace it with the recycled wastewater from the city's sewage treatment plant.

The city has used UC Davis agricultural engineering professor Mark Grismer as a consultant to counter arguments by UCR citrus experts that recycled water would harm the trees. The city's recycled water project is still in the works. The reclaimed water will be used to irrigate Martha McLean Anza Narrows Park, Fairmont Park and the future Tequesquite Park, and could also be used to recharge aquifers. 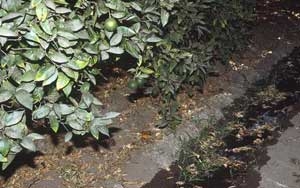