Host Range for Polyphagous Shot Hole Borer - Check It Out to See the Plants that are Attacked by the Fungus
Published on: February 16, 2016
Of the approximately 200 tree species that can be attacked by the Polyphagous Shot Hole Borer, about 100 of those species can be colonized by the Fusarium fungus that actually goes on to kill the tree.  This from a host of researchers at UC Riverside.  The really remarkable aspect of this insect/disease complex is the wide host range that can be attacked by the beetle and fungus. Read the whole article here:

But here's the abstract:

The polyphagous shot hole borer (PSHB) is an invasive ambrosia bee-tle that forms a symbiosis with a new, Fusarium sp., together causing Fusarium dieback on avocado and other host plants in California and  Israel. In California, PSHB was first reported on black locust in 2003 but there were no records of fungal damage until 2012, when a Fusarium sp.was recovered from the tissues of several backyard avocado trees infested with PSHB in Los Angeles County. The aim of this study was to determine the plant host range of the beetle–fungus complex in two heavily infested botanical gardens in Los Angeles County. Of the 335 tree species observed, 207 (62%), representing 58 plant families, showed signs and symptoms consistent with attack by PSHB. The Fusarium sp. was recovered from 54% of the plant species attacked by PSHB, indicated by the presence of the Fusarium sp. at least at the site of the entry hole. Trees attacked by PSHB included 11 species of California natives, 13 agriculturally important species, and many common street trees. Survey results also revealed 19 tree species that function as reproductive hosts for PSHB., approximately a quarter of all tree individuals planted along the streets of southern California belong to a species classified as a reproductive host. These data suggest the beetle–disease complex potentially may establish in a variety of plant communities locally and worldwide.

A PSHB conference is set for February 18 at the Huntington Library in San Marino.  For registration contact: 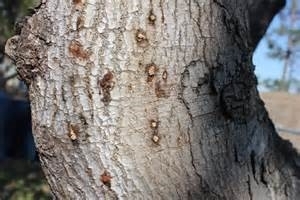