Lynn Kimsey
They fondly call her "The Wasp Woman" in reference to her specialty. She is a recognized expert on aculeate wasps and works with some of the most difficult groups, including tiphiids and chrysidids.

Lately she's been heavily involved in ongoing studies with the endemic insect species of the Algodones Dunes in southern California and with the International Cooperative Biodiversity Groups in Indonesia. Scientists and students from throughout the world clamor to work with her.

"The Bohart Museum is SO friendly and SO helpful and SO knowledgeable" is a comment heard all the time.

The nearly eight million insect specimens housed in the Bohart Museum, located in Room 1124 of the Academic Surge Building on Crocker Lane, are, in many respects, her babies. That's how well she and her staff treasure them, care for them, and engage people in the fascinating world of insects. Her "clientele" range from scientists to citizen scientists, from families to individuals, and from pre-schoolers to senior citizens.

She will be honored at a combined Academic Senate/Academic Federation awards ceremony during the spring quarter.

Highly esteemed for her public service, teaching and research, Kimsey consults with international, national and state agencies; identifies thousands of insects every year for scientific collaborators, public agencies and the general public; answers scores of news media calls and insect questions; and encourages a greater appreciation of insects through the Bohart Museum open houses, workshops and lectures.

Her areas of expertise include insect biodiversity, systematics and biogeography of parasitic wasps, urban entomology and arthropod-related industrial hygiene.

Lynn and her husband Robert "Bob" Kimsey, a forensic entomologist with the UC Davis Department of Entomology and Nematology, have two adult children. Neither is an entomologist--one is into computers, the other into firefighting and fire science.

You can bet, though, they were thoroughly exposed to all things insects.  And still are. 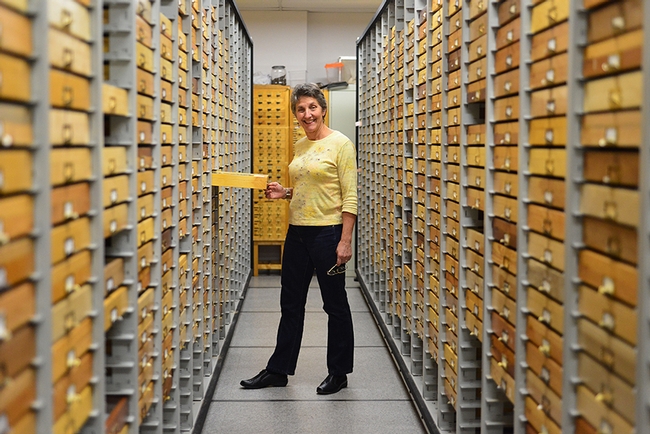 Entomologist Lynn Kimsey, director of the Bohart Museum of Entomology, with some of museum specimens--drawers and drawers of them. (Photo by Kathy Keatley Garvey)
Tags: Bohart Museum of Entomology (547), Distinguished Public Service Award (1), Lynn Kimsey (389), UC Davis Academic Senate (2), Wasp Woman (1)
Comments: 2
Comments:
by james
on March 16, 2016 at 3:35 AM
Nice Post
by Tessie Jenkins
on June 8, 2016 at 8:36 PM
Help! My dogs stool tested positive for whipworms. I am told that the eggs from them will live in my soil for 5 years, and my dog will just keep getting reinfested with them. I put my dogs on Interceptor heartworm preventative. This will also worm them once a month for whipworms. I am still grossed out by the infestation in my yard and concerned about the possibility of my 5 year old grandson getting them. How do I get rid of them?
Leave a Reply: