Bad news: The future of the Eastern, migratory population of the monarch butterflies.

A nine-member team, led by Brice X. Semmens of the Scripps Institution of Oceanography, UC San Diego, noted that the Eastern, migratory population has declined by more than 80 percent over the last decade.  "The monarch's multi-generational migration between overwintering grounds in central Mexico and the summer breeding grounds in the northern U.S. and southern Canada is celebrated in all three countries and creates shared management responsibilities across North America," they wrote in their abstract.

"...We find that, given a range of plausible quasi-extinction thresholds, the population has a substantial probability of quasi-extinction, from 11–57 percent over 20 years, although uncertainty in these estimates is large."

The world population of monarchs dipped from 1 billion in the mid-1990s to about 150 million monarchs today, estimates show. The authors noted that "the vast majority of the remaining monarchs live in the eastern portions of Canada, the United States and Mexico."

The researchers blamed the loss of breeding habitat as the major cause for the decrease in the United States.

Monarch lay their eggs only on milkweed, and caterpillars eat only milkweed. Other threats: habitat loss in the Mexican overwintering sites, climate change, insecticides, mowing regimes, invasive species, and diseases.

What to do? There's a movement afoot to place the monarch on the Fish and Wildlife Service's threatened or endangered species list.

Meanwhile, the key solution is to create and restore monarch breeding habitat, the researchers said.

Plant milkweed, the butterfly's host plant. The Xerces Society for Invertebrate Conservation provides a wealth of information on monarchs and milkweed (Project Milkweed) on its website.

It would be a shame to lose the mighty monarch. 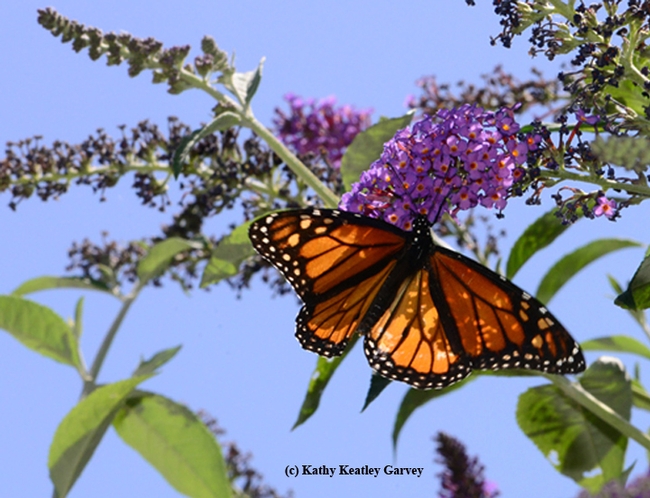 A monarch butterfly nectaring on a butterfly bush in Sacramento. (Photo by Kathy Keatley Garvey) 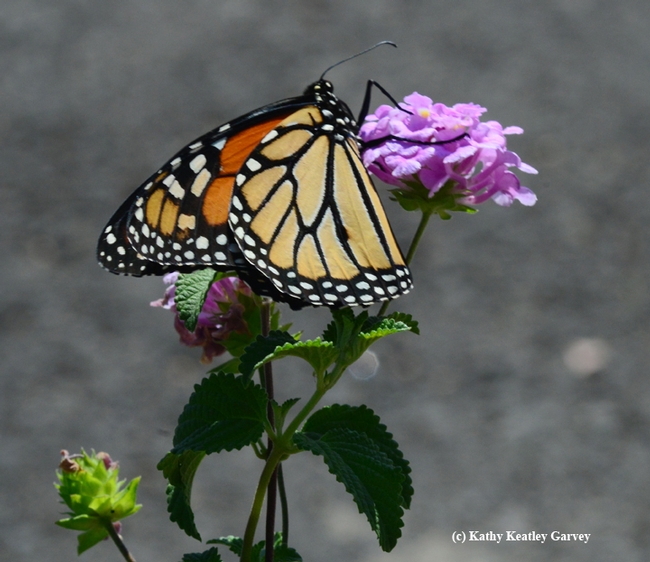