Will the population of woolly bear caterpillars predict the winner of U.S. Presidential election as it has for three decades? (Photo by Kathy Keatley Garvey)
Forget the polls that claim to know who will win the U.S. Presidency.

Let's hear it from the insects, namely the woolly bear caterpillars that populate the cliffs of Bodega Bay.

A UC Davis ecologist and his lab who study woolly bear caterpillars, the immature form of the Ranchman's Tiger Moth, Platyprepia virginalis, think that the "bears" will again predict the winner, as they have for the past three decades.

The woolly bears feed primarily on lupine along the cliffs of Bodega Bay, says professor Richard "Rick" Karban of the UC Davis Department of Entomology and Nematology. Sometimes the population booms; other times, it's a bust. When the population thrives, a Democrat heads to the White House. When the population dives, the Republicans take over.

The UC Davis scientists, known for their expertise in plant-insect interactions, are now making national headlines with their political predictions.

“The pollsters and talking heads seem unable to size up this election cycle,” said Karban. “Paul the Octopus had a pretty good run predicting soccer matches in 2012 so perhaps the woolly bears have earned as much credibility at forecasting this presidential election.”

“The woollies aren't seemingly as decided as they have been in years past - I don't know what they are really predicting,” said graduate student Eric LoPresti. “They seem to be leaning Republican but the point is between the range that we've seen in the past for each party.” Professor Rick Karban
The scientists first announced their findings in a poster displayed at the 2014 Ecology Society of America meeting. On April 25, they expanded on the concept, complete with intricate charts plotted in red and blue, in Lopresti's Natural Musings blog, “The Woolly Bear Presidential Election Outlook 2016,” co-written by scientists in the Karban lab.

Washington Post reporter Karin Bruilliard picked it up and ran with it on April 26 in a piece titled, “These Fuzzy Little Caterpillars Are Better at Predicting Elections Than Most Pundits.” Graduate student Eric LoPresti
“Each March, Karban censuses the same patches of lupine that he has for over 30 years,” LoPresti explained in Natural Musings. “The study asks a vexing question: Why are there are so many caterpillars in some years and so few in others? Many insects, including pests cycle like this, therefore it is of keen interest to many. Dozens of papers later, Karban, his students, and his collaborators have answered a great many questions, including how caterpillars deal with parasites, whether population cycles are influenced by rain, whether caterpillars enjoy eating plant hairs, and how caterpillars avoid their predators.”

This year, however, the pollster findings are unclear, they agreed. “Given their wildly erroneous predictions thus far for both primaries, trusting their predictions for the general election seems ill-advised,” LoPresti wrote. “The woolly bears, on the other hand, have a 100% accurate prediction record over the past 30 years. In years of low abundance, a Republican is elected, and in years of high abundance, a Democrat.”

“A superficial examination suggests that 2016 will be a Republican year – woolly bear abundance is not particularly high,” LoPresti noted. “However, looking a little closer, it may not be. The number of woolly bears per lupine bush in 2016 (0.53) is higher than the average Republican year by 152% and is 36% above the highest Republican year ever recorded (1988). However, it is only 27% of an average Democratic year and still only 36% of the lowest Democratic year (2008). This result is without presidential precedent in the last 30 years.”

So, which party, which political animal (elephant or the donkey), will occupy the White House come Jan. 1, 2017? What do the bears indicate?

“We suspect that the Republicans have the edge,” the UC Davis scientists surmised. “However, a valid hypothesis would be a third-party winner, such as a right-leaning independent (a logical placeholder in between Democrats and Republicans). Perhaps Donald Trump will take particular interest in our data. Alternately, a contested Republican convention could produce a fractured party and the old Republican woolly bear average would not accurately represent the mean caterpillar abundances seen by this new party.”

Responding to the April 25 blog, someone noticed the resemblance of the hair of a presidential candidate to the hair of the woolly bear caterpillar.

In research, Diet Mixing Enhances the Performance of a Generalist Caterpillar, Platyprepia virginalis, published in February 2010 in the journal Ecological Entomology, “We found that relative growth rates and rates of survival were higher when they fed on mixed diets compared to lupine only,” Karban said. These results were consistent with hypotheses that mixed diets provided balanced nutrition, diluted toxins, and/or allowed recovery from parasitoids, although our data did not allow us to separate these non-exclusive explanations.” 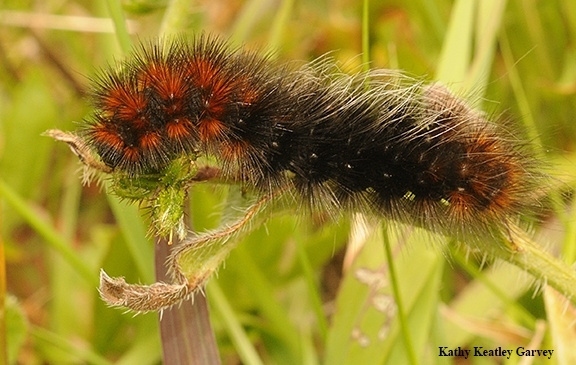