If you've never seen the "teddy bear bee," keep an eye out for it.

Gold on purple. Purple on gold. It seemed like royalty.

It paid no attention to the photographer. It proceeded to "rob the nectar," that is, drill a hole in the outside of the corolla in its short cut to reach the nectar, thus bypassing the usual method of pollination.

It looked huge. That's because it is. At one inch long, Xylocopa varipuncta is considered the largest bee found in California. The species is also a striking example of sexual biphorism--the female is solid black while the male is blond.

Native pollinator specialist Robbin Thorp, distinguished professor of entomology at UC Davis, enjoys showing the teddy bear bee to folks at open houses at the haven and Bohart Museum of Entomology and at other special events.

"It's a male and can't sting you," he assures cautious onlookers "Males have no stingers."

The Valley carpenter bee, so-called because it's common in the Central Valley of California, is one of our native bees. Its range includes an area from western New Mexico to southern California.

Look for it, too, in the Haagen-Dazs Honey Bee Haven, located west of the central campus and operated by the UC Davis Department of Entomology and Nematology. The garden is open to the public--free admission and free parking--from dawn to dusk.

You might see it on the penstemon and on the passionflower vine. 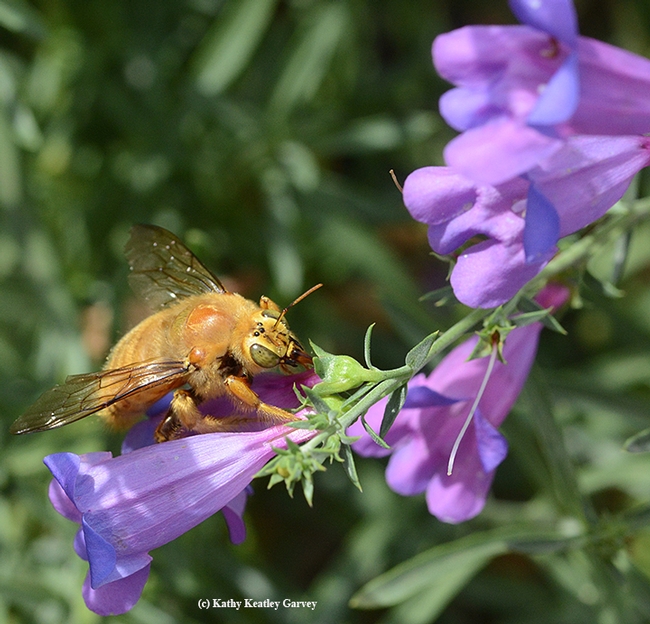 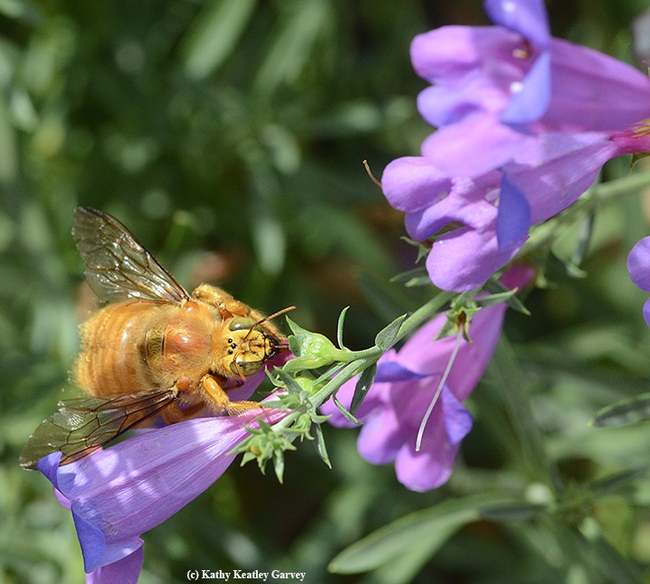 The male Valley carpenter bee twists to look at the photographer. (Photo by Kathy Keatley Garvey) 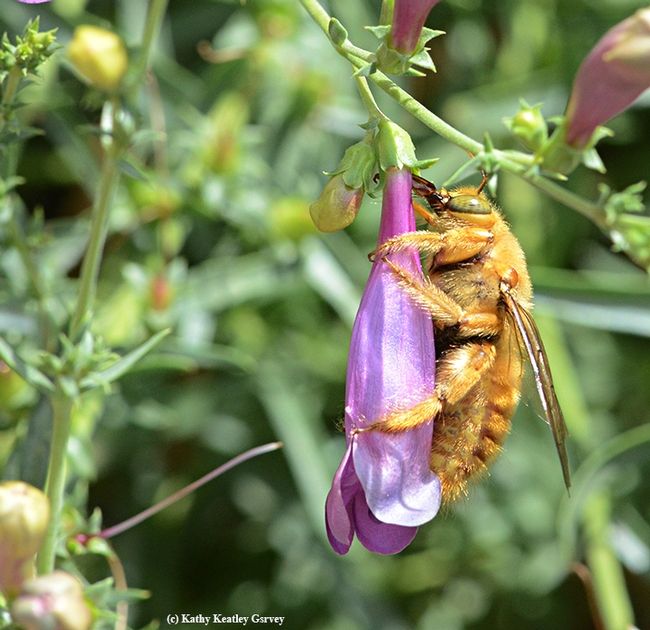 The male valley carpenter bee, aka "teddy bee," straddles a penstemon. (Photo by Kathy Keatley Garvey)
Tags: (Xylocopa varipuncta (1), Haagen-Dazs Honey Bee Haven. Robbin Thorp (2), male Valley carpenter bee (14), penstemon (3)
Comments: 5
Comments:
by Lynn Merrick
on May 11, 2016 at 10:42 AM
Wow! These photos are amazing! You are so talented!
by Kathy Keatley Garvey
on May 11, 2016 at 11:32 AM
Thank you! The male Valley carpenter bee is one of my favorite bees!
by Jose Andrade
on May 12, 2016 at 12:43 PM
Thats a mighty looking bee. Do they make good pets? 8o)
by Larry Oren
on April 22, 2017 at 1:29 PM
I was repairing a short part of our fence and disturbed their nest; it was in the fence boards and post. When I saw it, it scared the hell out of me, and right along with him was the big black female And both very pissed off at me for disturbing their nest. The question I have to ask: "Does the female sting?"
by ALEX VAN BROEK
on September 13, 2020 at 11:35 AM
Just saw a Teddy Bear Bee on the hedge flowers, along with the regular honey bees. Is this bee way out of his or her range, or a new normal for this SoCal bee? We are in Pleasant Hill, CA 9/13/20.
Leave a Reply: